In a box of mine that has been forgotten for many years, I found this gem: 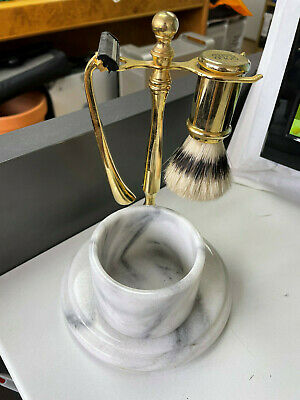 Or at least part of this gem.

About two decades ago, my dad was going trough some old stuff and found this complete set that I took over because he was about to throw it out.
I thought it looked cool so I wanted to keep it but it was years before I joined this site and learned how to shave properly, so I just kept it as decoration.
The brush was worn out so we, brace yourselves, simply threw it out.

Moving around etc. it went into a box and was forgotten for years, until I found it agian last week.

Does anyone recognize this set because I'm trying to locate a new brush handle to replace the one we threw away.
I'm planning to simply replace any brush it happens to have because, why not.

It's a really cool set made with white marbe and, as far as I can tell, gold plated brass.

It might be bought from Italy as I don't really remember being able to find similar sets in Denmark around that time.

I hope someone here can save us from that very unfortunate decision.

Looks similar to the sets marked JHL from Italy.
Typically, the brush handle was the same material as the bowl. JHL from Italy?
It really does look like a winner

I feel even worse now that it seems we've thrown away a beautiful marble brush handle...

That certainly is a gorgeous set, congratulations! I hope you're able to find the replacement brush, or at least a brush handle. Please keep us updated.

Too bad about the brush.
You must log in or register to reply here.

H
What do you think of my gift for my father?
2

Re-discovering all of my beard removal devices

Any suggestions for now/next shaving brush

Recommend me a cheap but hard working pen
2