I received my PJ2 from the Gentleman's shop about 1.5 weeks ago, and have used it everyday but one since then. I really love it... a lot. I'm half way through a great shave this morning when I notice some black sand like crap on my hand (I later find out it was ink from the Mama Bear's label, but that's neither here nor there). Thinking something funky might be coming out of my brush I take the time to examine it and 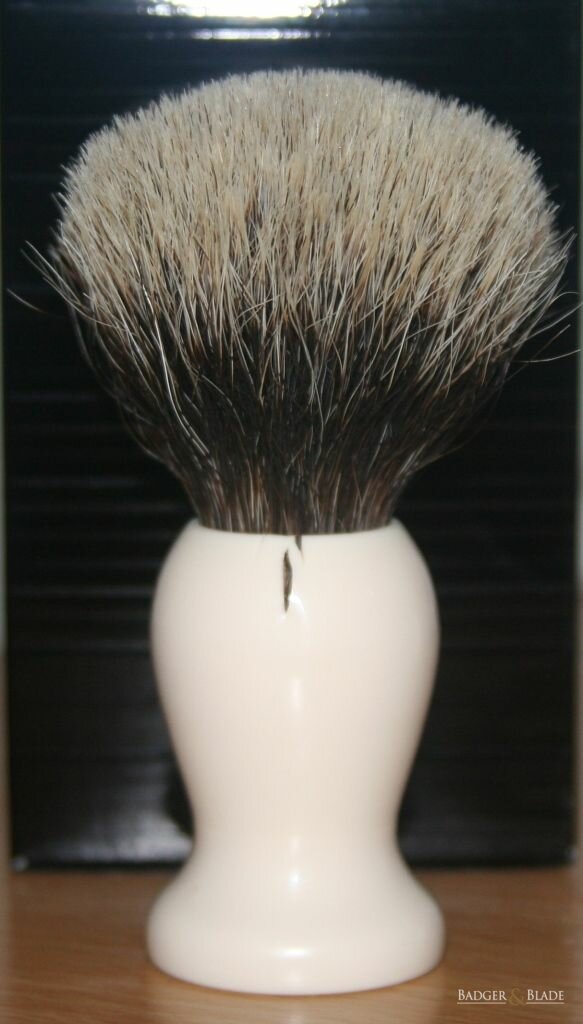 Needless to say, expletives flew, before I gathered myself and finished my A+ shave. I mean, I haven't dropped this thing, dropped anything on it, thrown it, juggled with it, shot it out of a pneumatic cannon... nothing. I've put it in uncomfortably hot water, but never burning hot or anything that I would imagine could cause a crack like this.

Any ideas as to what I might do besides pack it up and ship it all the way back to England and (fingers crossed) hope that they can send me a new one back before I leave for Thailand in 3 weeks? During which time I will be reduced to a pure badger brush from AOS since I just sold my other two brushes. I guess since these things don't exactly have serial numbers I would hope an American vendor (Lee or Em) might do an exchange out of the goodness of there heart. (and don't ask why I didn't get it from there in the first place, I kind of ordered in haste).

Just a disaster.
And not as though anyone wouldn't believe me, but here's a side view of the crack and label to prove it is indeed a Simpson's brush 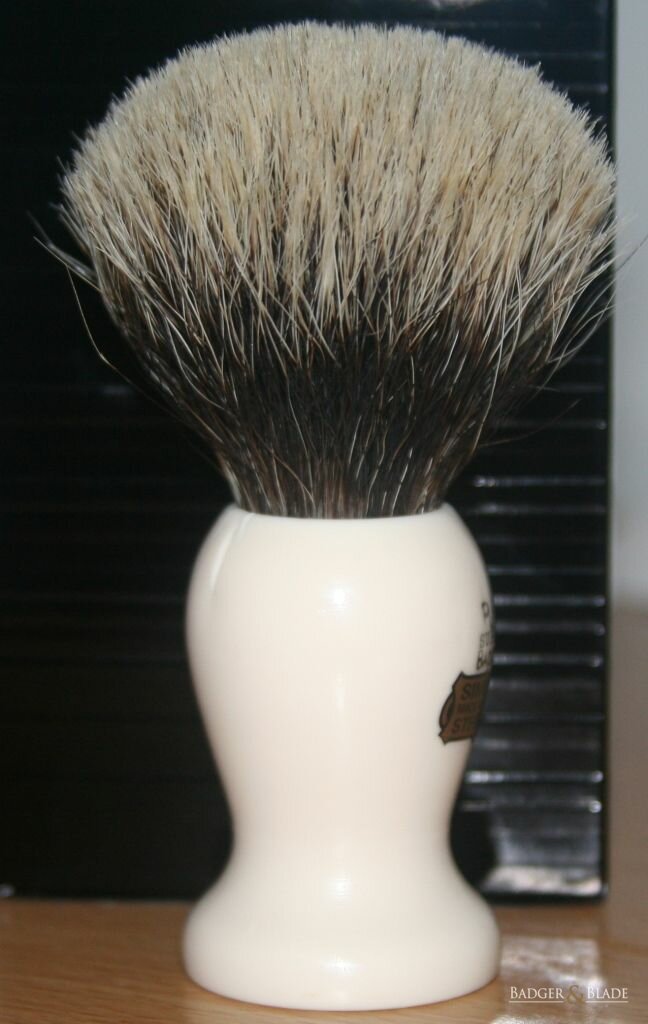 Any assistance would be greatly appreciated. Now excuse me while I go light myself on fire.

SLider said:
I mean, I haven't dropped this thing, dropped anything on it, thrown it, juggled with it, shot it out of a pneumatic cannon... nothing.
Click to expand...

You had me believing you until that pneumatic cannon crack. Now I'm suspicious.

Seriously, that sucks big time. Hope you can get it resolved before you leave. Perhaps if you explain the circumstances, they could fast track it for you. Good luck.

I'm really sorry/saddened to hear this happened to you. WHY do things like this always seem to happen immediately before traveling (typically, prior to one's vacation) and never while laid-up, sick in bed and with nothing but time on your hands?!??


I'm half way through a great shave this morning when I notice some black sand like crap on my hand (I later find out it was ink from the Mama Bear's label, but that's neither here nor there).
Click to expand...

Being a clueless Newbie, I don't know what is meant by the phrase: '...the ink from Mama Bear's label.' It's a little after 5:50 AM, so it's highly probable that 90% of my brain function is still asleep. At least that's what I'm using as an 'excuse.'


I DO hope TGS follows through (properly, IMHO) and exchanges your PJ2 ASAP *and* without tagging on any additional shipping & handling charges.

Hey -- wait a minute . . . you say you're going to Thailand? Isn't there a COUP going on there presently? Maybe this is one of those 'signs' we keep hearing about...and, well...oh *GOD* -- I'm now clutching at straws trying to think of something POSITIVE to contribute to a thoroughly dismal situation.

Take care SLider. I DO hope everything works out for the Best. (...or Super!

Oh -- and please '86' the "lighting yourself on fire" bit, leastwise 'till you've had an opportunity to use that replacement PJ2!

(Neither here nor there reply: You must have had the Momma Bear Limes soap. That is the only label that has disintegrated into a mess all over my counter.)

Did you look the brush over when you got it out of the mail? I hope they do replace it for you!
J

This is a long shot but perhaps you might phone them in England, explain your situation, have them contact their vendor closest to your itinerary and have them (the vendor) give you a brush when you get to Thailand.

They will probably want to see the brush first so send it to them by Fedex to expedite decisions.

Remind them that this has now become a showcase of their customer service. A little effort on their part in your situation will be witnessed by thousands (?) of us in this forum. (You might point them to this forum as evidence to that fact).

Imagine the advertising value of a small English company making hand made products in the traditional fashion reaching out around the world (USA - Thailand) to ensure that their customer's satisfaction.

This brush (the PJ2) receives glowing praise from people whose opinion I trust (eg. Joel) while at the same time gets a 'not necessarily worth the extra money' from others (eg. Scotto) whose opinion I also respect. This gesture on Simpsons' part would definitely tip my opinion towards the 'Joel' camp. Perhaps it would do the same for other gentlemen considering a brush purchase.

In any event good luck and have a great trip.

I would call the vendor immediately, and send your pictures. A good vendor should do two things (i) pay for you to return the brush and (ii) send you a new one using whatever shipping method is quickest so that you can get your brush in time for your trip.

A crack like this doesn't look like it was caused by anything but a defect in the handle. A drop or abuse would likely show more surface damage (chips, scratching or other signs of impact) than the large fissure that your brush has.

Let us know how it works out.

Slider.......Don't panic! Send them an email with images and details. More than likely they'll send out a replacement immediately (assuming they have one in stock) and ask that you send the damaged brush back to them even prior to receiving yours. They're exemplary vendors and shipping is generally a week or less.

Currently I have sent an email to Robert and Company with the pictures I took this morning. I have yet to hear back from them but will let everyone know as things develop. Thanks for the support my time of need

Your response was truly OUTSTANDING!!! It simply could not have been stated any more accurately - PERIOD.

Just received a Response from the Gentlemen's shop from Deborah. I'm not sure it's totally kosher to cut and paste emails, so I'll just have to paraphrase. Basically she said to return the brush and they'll fix the problem as soon as possible. Regarding the time constraints due to my imminent departure, I was advised they would do the best the can to accomodate me. Looks like I'm down to the AOS pure badger for a week or so... Blaaaah

Well, maybe boiling the brush is not a good idea afterall...

This gives me another reason for having a lot of brushes.

Hope you get your brush back in time. The problem is customs, which can delay things sometimes (though not always).

Man, FedEx priority shipping was $58, and it actually ended up being less than the economy would have cost (go figure). I seriously hope they'll re-imburse the shipping costs.

I just received an email from Robert that pretty much stated his annoyance with my return. Because I received a perfectly good product, reimbursement is at the discretion of Simpson's, and since they have to pay freight to send the brush back to Simpson's, they won't consider reimbursing my charges. All this I understand to somepoint because they are a re-seller, however in his last sentence Robert informs me that "It must be pointed out that Simpsons brushes never crack, unless gravity is an issue in their use." Um, excuse me. Does that mean because I told you I have not mishandled the brush I must be a liar? Am I misunderstanding old english here, or is that a back handed way of saying, you must have mishandled the brush so this is all your fault? Not to thrilled with the customer service or attitude I'm receiving so far, especially after spending $170 on a brush and $55 return shipping.

That's very disappointing. If there's a manufacturing fault with the brush you are entitled to a full refund, including any shipping costs. What the Gentleman's Shop does with the brush on it's return to them is not your concern, you didn't buy the brush from Simpson's you bought it from TGS and it is their responsibility to see that you as a customer are satisfied.

Well, that settles it for me- no giving in to SBAD with any of The Gentlemen's Shop products.

For the money spent. excellent customer service is to be expected.

Let them know you have informed the Badger & Blade community and we are not happy.

In all fairness, I can potentially see that they might be a little annoyed at you sending it by such a pricey method, and expecting them to cover the cost, instead of working some other solution out first, that might have kept the cost down. But then, you did ask, as they did just say to send it back, and THEN they would try to do something, so I don't blade you for trying to get it there fast. (Although, in retrospect, Global Priority maybe would have been a reality fast but much cheaper option?).

And really, I would expect a little more, and would not expect a suggestion that you used the brush improperly, which is a little out of line, I think. It gets me went vendors say things like that. Clearly they DO crack sometimes, because yours did. It's sort of like when someone says, "well, no one's ever complained before." Well I AM NOW.

Anyway, good luck. Hopefully in the end, they will take care of you, since I understand they do have a really good reputation.

There are advantages, though, to ordering from people on the same side of the pond....

Let's let The Gentlemen's Shop know that we expect better treatment of one ot the B&B brotherhood! I think a quick email expressing our feelings is in order!

I think everyone needs to relax... TGS has always shown exemplary customer service. Let's just wait and see what happens before everyone jumps all over them.

I wouldn't be thrilled either - that does seem like an underhanded way of accusing you of mischief.

I can understand them questioning the return just because of the costs involved - if they have to pay to ship something internationally back to them, then to Simpson's, back to them again, and back to you, it'd cost way more than they made in profit.

Now, of course, it'd be worth it to maintain a good customer and their image. As it is, I'd think twice before ordering anything from them. (Not that I'd order from the UK unless necessary anyway - you should slow down your personal ordering process

)
You must log in or register to reply here.

What's All the Fuss About?
2