GIVEAWAY! PIF No.2 for Those Who Are Serious About Getting Into Straight Razor Shaving - Not CONUS or Canada

PIF No.2
NOT AVAILABLE TO CONUS OR CANADA RESIDENTS

If you are serious about getting in to traditional straight razor shaving, this could be the PIF for you. To show that you are really serious, you will need to first put together at least a 0.1µm diamond pasted balsa strop before entering. The PIF is a new shave-ready (to my standard) Titan ACRM-2 T.H.60 with African Blackwood scales.

The particulars of this SR will be posted at a later date. This PIF is being published now to allow those who are interested sufficient time to meet the entry requirements. 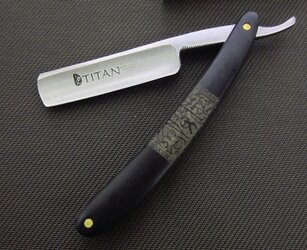 ​
Rules to be awarded this PIF:
Instruction on how to make your balsa strop can be found here in Annex II of the latest revision:

Even if you don't win this PIF, you will have a good start in getting your own SR setup together. Best of luck to those who participate.
Last edited: May 7, 2022

If you've ever thought about shaving with a straight, get going on making that pasted balsa strop! It's easy to do and there's lots of time to source the materials. You're not going to find a better PIF anywhere, so what are you waiting for???

Wonderful PIF, well done! And thank you for making this available to non-USA & Canada members.

dmshaver said:
Wonderful PIF, well done! And thank you for making this available to non-USA & Canada members.
Click to expand...

If I keep doing this, I am eventually going to run out of eligible countries

This is a new SR being offered. I expect it to arrive to me within a couple of weeks. The SR's technical details will then be posted here and I will hone it to shave-ready.
0

Great PIF! lt is very generous of you to open PIF for non US residents! I should've jumped into SR 2years later.

@rbscebu Your enthusiasm for straight razors is growing on me.

When I started DE shaving, I'd see your posts and think "now THAT'S something I'll never get into!"

But two awesome PIF's and all these positive posts about the wonders of SR shaving have my curiosity piqued.

I'm not in, not eligible, and currently not interested, but I respect your generosity and your SR missionary works.

I can’t get the materials for the second time

hugosf said:
I can’t get the materials for the second time
Click to expand...

It may be called by another name in your country. Go to a hobby or craft shop. Ask them if they have any timber to make flying model airplanes. If they do not have any, ask them if they know where you can get some.

If they do, take a photo of both the surface and end grain. PM the photos to me and tell me what name the store call the timber. I might then be able to tell you if it is suitable.
Last edited: May 20, 2022

The SR for this PIF has arrived into my hot sweaty hands. It has the following particulars:

I just noticed that this Titan ACRM-2 T.H.60 is not the same as all the others that I have previously received. They are now ground without a stabiliser. 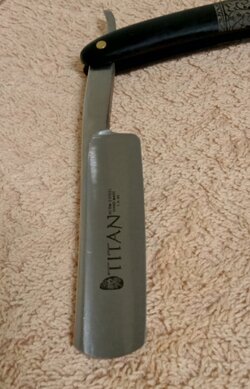 ​
The previous ones had a definite stabiliser as shown below. 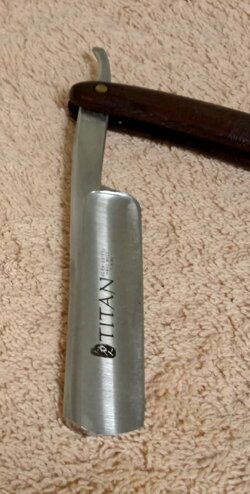 "Balsaträ" in Sweden. Is it cheating just buying a ready made one? 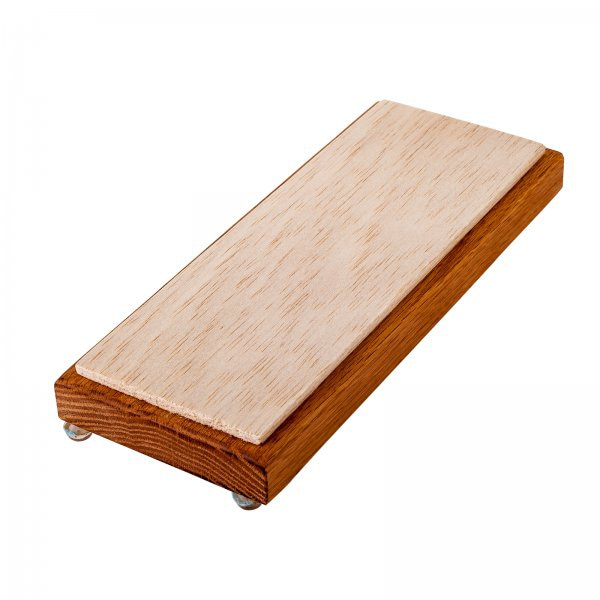 wazabees said:
"Balsaträ" in Sweden. Is it cheating just buying a ready made one?

Not at all cheating. The one shown is for knives. Just remove the balsa from the timber base and mount it on a substrate that doesn't warp with time and changes in humidity/temperature. Of course, being shorter in length, you will need to do more laps.

Now honing up this SR for the PIF. First a Sharpie pen test with a couple of very light laps in a 1k synthetic.

The Sharpie test showed that the blade is not warped. It also showed that on the rear side the bevel and spine were on the same plane.

The bevel on the face side was another matter. The Sharpie test showed that only the top part of its bevel was in the same plane with the spine. This was probably caused by the spine being lifted off the honing medium while honing the face side.

​
This doesn't present a problem. The main thing is to be aware of it when setting the bevel.

I took the blade to my 1k synthetic and started to properly set the bevel. About 50 fairly heavy laps (equal both sides) had the face side bevel and spine on the same plane and the bevel approaching set.

Here is the finished shave-ready edge. 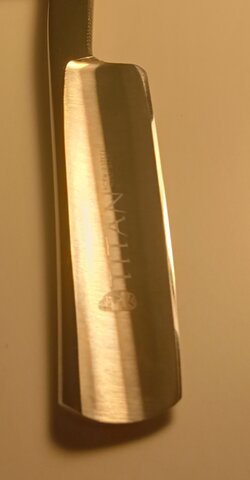 ​
The complete process of honing this SR took 1hr 50min. This included about 45 min lapping the three whetstones flat which I do with each SR that I hone.

Tomorrow morning I will give this edge the ultimate test, the shave test.

The shave test was performed this morning and results published here.

I'm tempted to swap this SR out for another of my Titan ACRM-2 T.H.60 SRs, but I won't. A keen eyed recipient would see the difference.

This SR has now been disinfected and maintained on 0.1μm hanging balsa after this morning's shave. The inside surfaces of the timber scales have been given two coats of bees wax to help with moisture protection and the outside surfaces two coats of Renaissance wax.

The blade has been given two coats of Renaissance wax and put away, all ready for shipping.

To sweeten this deal, I will throw in a 60mm wide x 300 long (stropping length) denim strop to clean the bevel on after each shave before maintaining on the 0.1μm hanging balsa. 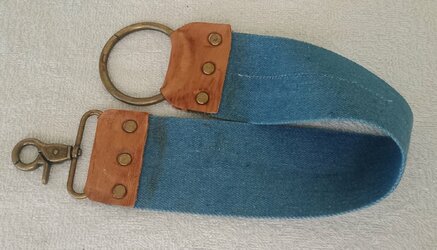 Only one month to go. If no one enters by the end of June, I will award the PIF to the first person to meet the conditions after the 30th June.

It’s always difficult to do manual tasks in a apartment but I believe it’s done. I sand the substrate and the balsa individually, glued the two together and sand the balsa one more time. Seems pretty flat . That’s is my “ugly” balsa strop.

I’ll do a better strop later when my brother finished his kitchen. I probably can get some ceramic to do a better substrate.

I order some diamond compound from Amazon US, but will takes ages to arrives in my country. 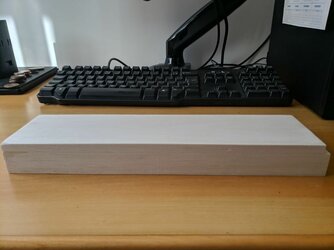 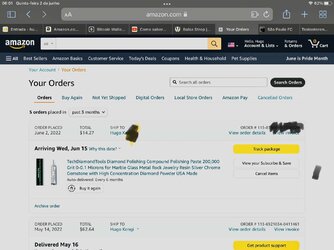 GIVEAWAY! PIF for Those Who Are Serious About Getting Into Straight Razor Shaving - Not CONUS
2

When You Are Interested In Trying Straight Razor Shaving…
2 3