Participation PIF - Czech Out These Blades

Participation PIF - Czech Out These Blades​
Everyone who participates gets 6 Czech-made blades - 3 Tatras Platinum Blades and 3 Tiger Platinum Blades!!

HUGE Thank You to @Space_Cadet who generously provided A WHOLE BUNCH OF CZECH-MADE BLADES to be distributed to whoever would like to try them!!

So, I have enough Czech-made Blades for 25 B&B'ers (and yours truly) to have the opportunity to try these Czech-made Blades...absolutely free'ish!! You'll need to actually USE one of Each Blade and POST your experience in this thread!! You can talk about the razor you tried the blades in, any software involved, your shaving preparation and method, maybe include some shaving-related pictures, add witty banter, and any other kinds of stuff. Also, see how many shaves you can get from each blade.

The PIF Phase will run between now and ends on 5/15/2020, with any unclaimed blades will be offered to the B&B Great Blade Exchange

The Participation Phase begins whenever you receive your blades!!

Some have surmised that these are the Same Blades; however one is in gray packaging and the other is in blue packaging; so obviously, I have no idea!! I will be Czech'ing out these blades myself for the first time.

These Czech-made Blades have been the subject of recent threads in the Safety Razor Blade Sub-Forum!! After committing to this Participation PIF, go and Czech out those threads!! Lots of good stuff there!!

Here are the rules:

IMPORTANT: Once you've posted "I'm In!!", please send me a PM with your name and complete mailing address (I'm in the US, so if you're international, please include your Country with your mailing address).

I'm in. How can I say no to more blades on my Czech list?

I'm in, I really enjoyed your last challenge pif!

I'm in! I love posting about my experiences with new stuff. Don't know if y'all enjoy reading it, but since you're asking...

I am in! I always love to try new blades and for sure will post my review here. 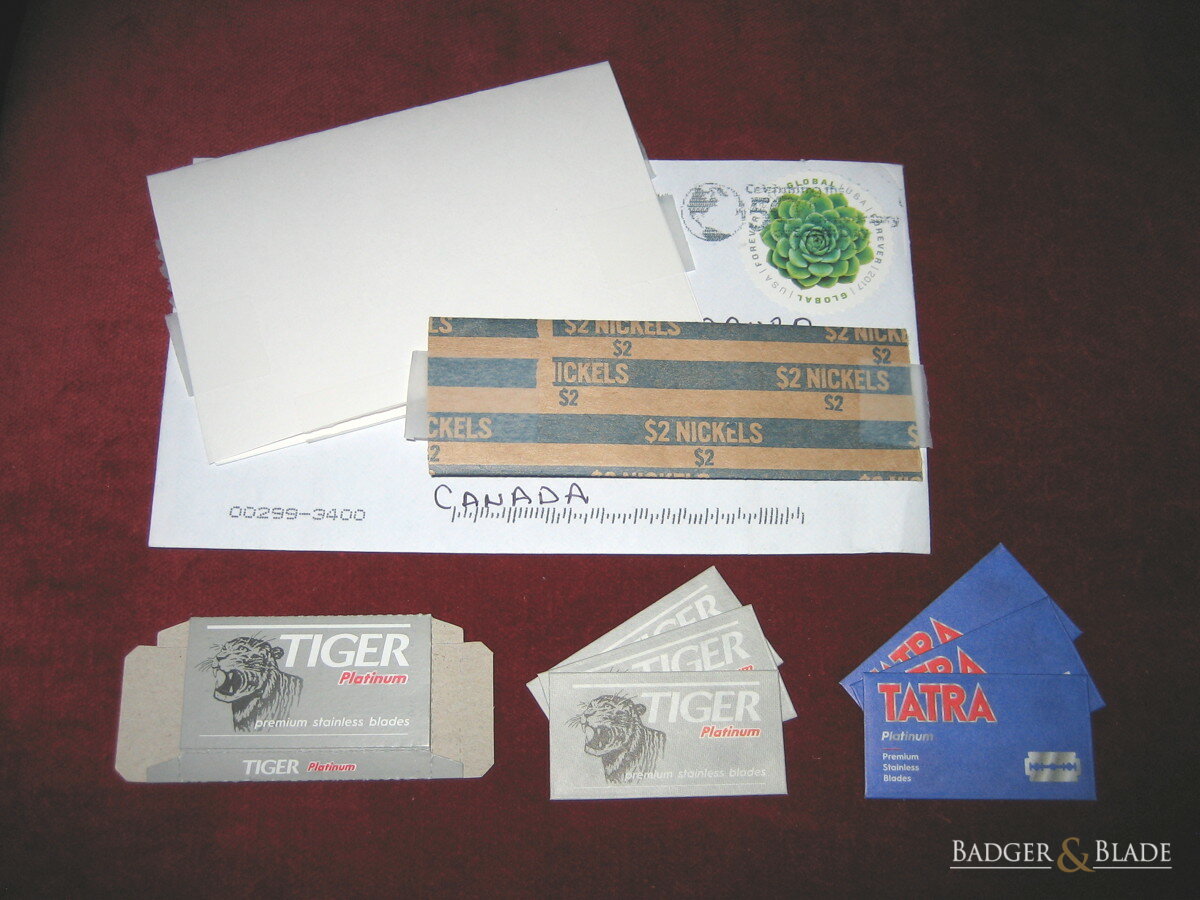 I was one of the International B&Bers that @Grundi graciously supplied with blades before the Participation PIF formally began. For the last few days, I've been switching back and forth between them.

I might be jumping the gun a bit, and possibly planting pre-conceived notions in everyone's minds, but I usually only get to post after everybody else has abandoned the thread (see the ELIOS Participation PIF)! So, here are my initial thoughts. Verbatim from my shave journal (warning: probably long and boring!)...

April 29: The blade is double-wrapped and secured with four large wax blobs. The packaging is reminiscent of an Astra blade; maybe not surprising since Astras were once made by Czech Blades S.R.O. Anyway, soaking the blade in a cup of hot water cleaned it right up.

I put the blade in a Slim set to 7. The first stroke gave the impression of a very sharp blade. However, there was some roughness, so I dialed it down to 5. This felt smoother, but the danger level still felt high, even riding the cap a bit.

After some thought, I switched to my wonky Maggard V3 (badly misaligned, so it has an aggressive side and a mild side). On the aggressive side, the blade felt very efficient on the WTG pass. The earlier roughness was non-existent. I switched to the mild side for the ATG and XTG passes and was rewarded with a very close shave. No buffing required, at all.

This blade reminds me a lot of the Viking's Sword. I'm not sure if anybody else here has tried a Viking's Sword (other than Space_Cadet), but it's a blade that feels extremely sharp and mows down stubble like crazy. Yet, it has a somewhat unrefined nature, especially if you shave at a steep angle like me. If you don't pay attention to technique or if you rush things, it can bite you.

Having said that, I like the Tiger. As mentioned many times in the ELIOS thread, my main concerns are predictability and consistency. So, if the Tiger can maintain this efficiency over several shaves, then it could be a winner.

April 30: Double-wrapped and secured with large wax blobs like the Tiger Platinum blades. Laser-etched both sides with "Tatra Platinum". Same font style and size as the Tiger.

Right away, it felt extremely smooth and comfortable. A complete change from the Tiger. This is surprising because I thought these might just be re-packaged Tigers. I had read that both brands (Tiger and Tatra) are made in the same factory.

The Tatra doesn't feel as sharp as the Tiger, though. In fact, it's extremely mild. Is this a case where the coating needs to wear down to expose more of the blade edge before the true nature of the blade reveals itself? Despite that, the WTG pass is still quite close.

I'm beginning to enjoy this shave. The ATG pass is a revelation. I didn't have to watch my technique as closely as I did with the Tiger. Very comfortable and confidence-inspiring! The XTG pass is also trouble-free.

Overall, the Tatra performed exceptionally; one of the closest shaves I've had in recent memory. As usual, though, I'm concerned with the predictability, consistency, and longevity of any blade that I test. We shall see if the Tatra can consistently maintain this level of performance over the long term.

May 1: I used the Maggard V3 again. Remind everyone that the V3 head is a DE89 clone, just to give some perspective. I'm sure that many people already know this. (<-- that's what I actually wrote in my journal.

I am struck by the differences between the Tiger and Tatra blades.

As before, the Tiger blade feels sharp, yet rough. All three passes exhibited some roughness, although I didn't suffer any nicks or cuts. But, I had to pay extra attention to what I was doing. In the end, I got a close shave, but this blade doesn't feel anything like the Tatra. I have some minor irritation along my jawline. I need to focus on my angles. I might also need to stay on the mild side of the V3.

Up to now, I can characterize the blades like so: The Tiger is sharp and efficient, yet exhibits an unrefined/rough nature; meanwhile, the Tatra is only medium-sharp and requires more work to attain a close shave, but is very smooth and comfortable while doing so.

I can see using the Tatra for an extended run. I can't say that about the Tiger, so far.

I have the Tiger in my den but I have not tried them yet...

I'm In!!
thanks for the giveaway
C

Contributor
If it’s not too late, I’m in. It will be a tongue-twister to try Tatra in Tatara.

Thanks very much gentlemen!!
B

Contributor
I'm in. Sending along a PM now. I have been curious about these blades.

I have the Tiger blade in my current “blind test” that I’m doing now here. It will be awhile before I finish my testing, but I had to include the Tiger. I never heard of them but was intrigued that they’re Czech and the name is pretty cool too.

I'm in! It's been a while since I've done a blade comparison, and I'm looking forward to it.

What an AWESOME response so far!! Thank you!!

There are still several slots to fill, so, if you haven't tried these Czech-made Blades, please sign up!!

While @FarmerTan is "pondering", I'm sending him some blades too, so he'll have a reminder of what he's "pondering"!!

@ukobke, please feel free to join in and post about the Czech-made Tiger Blades as you shave with them!!