Contributor
Gents, today, this Sunday morning I did not shave.

I always shave every single weekend morning, ever since becoming addicted to DE's. But not today. Because I was travelling and I knew that waiting for me back home was a newly arrived puck of Nuavia Blu soap.

I should note that normally I am a cream guy, since in my neck of the woods we have very hard water. But ever since trying Stirling soaps, which are really really good, and also getting a boar brush with some serious backbone, I am diving into soaps with a vengeance.

So this evening, an hour ago, I did a full face and head shave, trying out the Blu for the first time. And wow, I am impresssed.

Then lather straight out of the bowl. This soap lathers like crazy, and ... with a brown tone?! - At first it looked strange to me, almost dirty, but as the lather builds it turns almost white. But the feel - very good indeed and the scent really coming out strong (good strong) now. My wife took a whiff and looked at me with a nice smile... "uhmmm, nice smell..."...

Then loaded my beloved Slim with a Feather, set it on '3' as usual and did my usual 3-pass.

Awesome! - best post-shave feel ever, skin as soft as I never felt it before, at least in a long while. The advertising actually says that this soap also contains balms so no need for aftershave. This almost felt true initially but I still used some Speick splash and it felt good.

Now, 30 min later, the soap scent still lingers really nice and the feel ... is over the top.

Conclusion: The first go is a huge success, I love this soap! 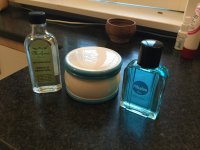 If I read anymore positive reviews of this soap I'm going to be compelled to open up my box of Nuàvia Blu and give it a go.

AlphaFrank75 said:
If I read anymore positive reviews of this soap I'm going to be compelled to open up my box of Nuàvia Blu and give it a go.
Click to expand...

What's holding you back? In my book, Blu (and Rosso, but not Verde) are in my top five.

^ not a fan verde's scent too

It's good stuff, Blu and Rossa's scent are so complex.

Glad you enjoyed it.

Great review and excellent first impressions!! I'm there with you!! Blu is amazing, from the presentation, to the complex scent, how it performs, and the post shave feel and the way the scent lingers!!

How does this soap work? They claim no surfactants or hydroxides... Then how does it foam? Maybe they are just basing their claim on hydroxides are gone after saponification?
M

Thanks for the review. I may try this soap once l my puck of MWF is depleted. My new policy is to only have one soap in my "rotation" so l cannot buy it today.
You must log in or register to reply here.

My First Impressions With Tabac
2

Mitchell's Wool Fat Fans: Is there a shaving soap that is equal or better?
2