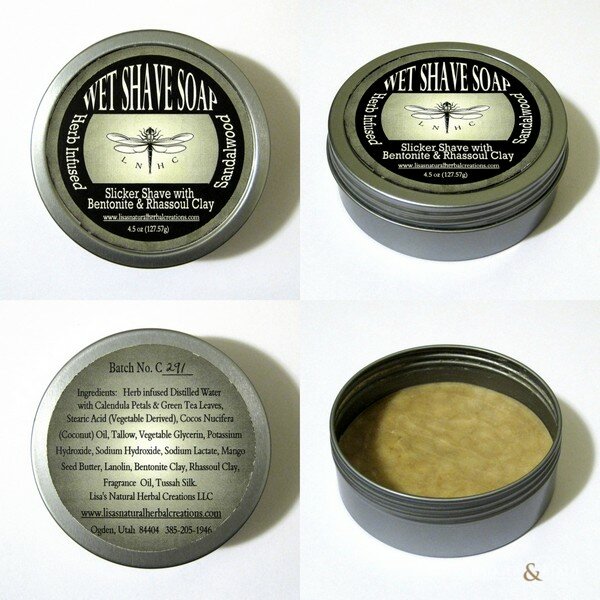 Scent: Lightly scented sandalwood from fragrance oil that seemed to diminish over time

Hardness: Based on my limited experience, I'd say that this soap is moderately hard, probably on the harder side than the softer side of average

Loading and Building: Loading a brush and building the lather with this soap is easy. With measured soap and water amounts in a lather bowl, large bubbles develop very quickly at the beginning of the lather-building process. Over time, the bubbles get smaller and smaller as the lather develops and grows with agitation. Building the lather takes me around five minutes, as timed, but I knowingly build lather longer than necessary to ensure that the job is done.

Exact Lather Results for 1st Optimization Cycle: This was the first soap or cream that I optimized with exact lathers, and due to the learning curve, I shaved daily with the soap for over a month, from April 21, 2017, to May 29, 2017, and I still hadn't refined my evaluation process by the end of that long optimization cycle. Since then, I've gotten better and more efficient at optimizing lather and my bias for thicker lather has been mitigated. Upon recently reevaluating the optimum that I settled on, having a total mass of 8.0 g and water-to-soap ratio of 7, I found that my new evaluation of that lather was practically identical to my old evaluation, but I disagreed with the conclusion that that lather was the optimum for the soap. The total mass seemed good, but the water-to-soap ratio seemed lower than it should be. A second optimization cycle was thus started.

Exact Lather Results for 2nd Optimization Cycle: Seventeen (17) daily shaves were conducted from August 29, 2017, to September 14, 2017, with total mass ranging from 7.7 g to 9.0 g and water-to-soap ratio ranging from 6 to 15. Total masses of 7.7 g and 7.8 g were found as not enough and masses ranging from 8.0 g to 9.0 g, particularly in the middle of that range, were found to be good. Optimizing water-to-soap ratio was more difficult with LNHC because it was found to tolerate a lot of water and shaves with LNHC were not very good due to the lack of slickness. The optimum water-to-soap ratio was narrowed down to approximately 8.5 to 9.5 with okay slickness, cushion that was not much, and dry post-shave, and a ratio of 9 was settled upon. At a water-to-soap ratio of 6, slickness was "not good" with "plenty of times of bad friction", but at least the cushion was good. No matter the water-to-soap ratio, the post-shave was found to be on the dry side, generally with some irritation that might have been related to the irritation that was usually felt during and after applying lather for the third pass. Friction was typically felt near the end of passes. With increasing water-to-soap ratio, stick-slip started to be experienced at a water-to-soap ratio of 10. Slickness decreased with more friction and stick-slip as water-to-soap ratio increased, and at a ratio of 15, it was as if the stick-slip instances with earlier shaves had just transitioned to more "stick" with fewer instances of stick-slip, and friction near the end of passes was bad, but didn't stand out as much because of all of the other friction. By this point, the lather still did not appear "wet", although the lather no longer adhered much to itself or the skin and the lather seemed to collapse a little bit upon application. Test lathers with water-to-soap ratios of 20 and 25 resulted in lathers that were kind of shiny with some "wet" behavior, but airy and foamy with stability issues, as observed with weakening structure over time as the lathers became more shiny and "wet". Adding even more and more water yielded foamy lather that eventually got visibly loose and wet.

Ranking Results: In next-day testing, the optimum lather for B&M Latha was confirmed as better than the optimum lather for LNHC, as one would expect based on overall notes about slickness, cushion, and post-shave. The lather with B&M Latha appeared better, and application with B&M Latha was noticeably smoother than with LNHC. Slickness with B&M Latha in this test was okay, and at least that of LNHC's optimum, but I believe that the slickness would have been mostly good, as experienced before, if the razor had not been well used with LNHC residue and I had been shaving daily with B&M Latha. Cushion and post-shave of B&M Latha were similar to prior results. Irritation during and after application for the third pass was slight and much less than with LNHC. Irritation after the shave was there, as previously noted with B&M Latha, yet it probably would have been less if the razor blade were not well used. My face didn't feel quite as dry between passes compared to LNHC, and post-shave dryness with B&M Latha definitely wasn't as much as with LNHC. The post-shave with B&M Latha in this test was relatively not dry compared to LNHC.

Takeaway: LNHC reminds me of the phrase "you get what you pay for". The price per shave is relatively low, but so is the lather quality, specifically with respect to slickness. Further, LNHC can be frustrating to deal with because it tolerates a lot of water before showing signs that the lather is getting "wet", and by that point, lather quality has already deteriorated quite a bit below the optimum that corresponds with much less water.

Important Note: This soap has been discontinued until a "better fragrance oil" is found, as stated at LNHC's website. Regardless of whether the fragrance oil is the cause of irritation that I experienced, my analysis still applies to LNHC's "wet shave soap" with respect to slickness, cushion, and post-shave. LNHC's newer "premium artisan shaving soap" does not apply here.