On the geometry of the Slant

Ladies & Gents - For those of you who like to understand how their tools work, I have created the following (crude) diagrams to try to depict the geometry of the Slant.

Here is a diagram of a razor blade, looked at from above, as if it was lying on a flat surface. The corners are labeled L and R for easier reference. On the right is an orthogonal, side view of one of the non-cutting edges. The arrows indicate the orientation of the cutting edge, or, in other words, the direction of the normals of the edge. In these two diagrams, the normals are in the plane of the paper.

Below are four diagrams each for a Classic razor (left) and the Slant (right). 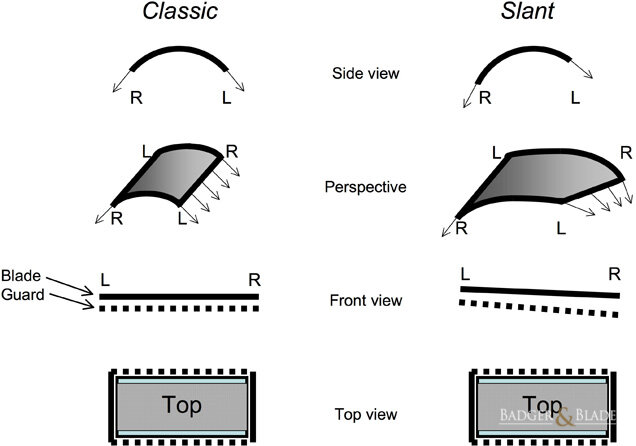 In a Classic, the blade is distorted such that the short, non-cutting edge is bent like an inverted U. The orientation of the cutting edges is thus pointing downwards. The perspective illustrates that the orientation is the same along the entire length of the edges. The front view illustrates that the cutting edge is straight. The guard is indicated. The top view shows that the edges of the blade (light blue) protrude slightly from underneath the top cap (grey). The guard is indicated.

In a Slant, the blade is not only bent but also twisted such that the R corners of the non-cutting edges are pointing lower than the L corners. Consequently, the direction of the cutting edges at the R corners is pointing lower than at the L corners. The perspective shows that the orientation of the cutting edge gradually changes along its length from the orientation at L to that at R. For a given edge, the arrow heads lie on a helical path. The helical axis is coincident with the cutting edge, which is thus straight as the front view indicates. In contrast to the Classic, the edge is slanted relative to the guard. When viewed from the top, the edges of the top cap, the blade edges and the guards are all parallel.

I cant tell whether the bend/twist in the Slant has an effect on the geometry of the edge. It probably depends on the type of razor blade used. If the blade edge is round, as most edges are, changing the orientation of the normals along the length of the edge will have no effect, provided the helical axis is close to the edge. If the helical axis lies further into the blade (for example, for a blade that is not very stiff), the edge itself would no longer be straight but would have a helical bend. I can only surmise that a non-straight edge is suboptimal for cutting hair, perhaps because stubble would be sliced off at different heights, and some portions of the edge might actually cut into the skin while other portions cut into stubble. Such effects, if present, would probably even out over the course of several passes.

If the edge is pointy, then the twist would indeed result in a helical path for the edge. I am not an expert on manufacturing cutting devices, but I believe pointy edges (at the microscopic level, which is of concern here) are very difficult to achieve. Still, different blades may have slightly different edge geometries.

By contrast, it is undeniable (at least for my own Slant) that, when looked at edge-on, the distance between the guard and the cutting edge varies from left to right. Combined with the slant of the guard itself (relative to the direction of movement, i.e. the handle) this geometry results in a more economical slicing action of the blade, as opposed to the chopping action on a Classic. It is interesting to point out that the right sides of the cutting edges have a steeper edge angle and are thus more aggressive than the left sides. At the same time, the distance between the edge and the guard (and thus the exposure of the edge) is larger on the right side, thus making it even more aggressive. In other words, I believe the "aggressiveness" increases from left to right.

"Aggressive" here means that while the blade at the left side of the edge may be parallel to the skin and is thus cutting stubble horizontally, the blade edge at the right side is pointing towards the skin, either cutting the stubble at a lower point, cutting into the skin, or scraping along the skin surface.

Thats my story, and I'll stick to it (until someone comes up with cogent arguments to the contrary, in which case I will revise my opinion

not only can I read it, but can understand it too....

Vector maths!! (For our British colleagues)

Thanks for this! I'm sure many folks will benefit from the work you've done. The only thing I can think of that would perhaps assist in illustrating the geometry would be to add a picture or a diagram that shows what the slant looks like from a bird's eye point of view, ie. showing the cap edge, the blade and the guard. In a properly loaded slant the edges are parallel.

Again, thank you very much indeed for doing this.

I just found a mistake in my presentation above: when looked at from the front, the distance between the edge and the guard increases from left to right, not from right to left as stated originally. Thus, the left sides of the blades are much less aggressive than the right sides. I'll update the figure as soon as I have found out how to create one that doesn't violate the size restrictions of this forum. I should probably just include a series of jpgs. Stay tuned! Best - MM

Please check out the original post again. I have now included the diagrams as jpgs, instead of as a pdf (which has a ridiculously small file size limit.) I have also added diagrams for the top views, as requested. Finally, I have updated the text to make certain things a bit clearer, and I corrected the issue that I mentioned in my earlier post. Cheers - MM

mozart said:
Please check out the original post again. I have now included the diagrams as jpgs, instead of as a pdf (which has a ridiculously small file size limit.) I have also added diagrams for the top views, as requested. Finally, I have updated the text to make certain things a bit clearer, and I corrected the issue that I mentioned in my earlier post. Cheers - MM
Click to expand...

A big thank you from me and no doubt from everyone else as well.

Thanks for the hard work, very much appreciated!
M

Thanks guys, my pleasure. I learned quite a bit when analyzing this little gem. I think, most important to me was the realization that it is impossible to maintain the generally recommended 30 degree angle between blade and skin across the entire length of the blade. That angle varies from shallow on the left side to steep on the right side. I now exploit this feature by predominantly using the less aggressive, left side for the first pass and the more sensitive areas. I reserve the more aggressive, right side for the later passes or those areas that can take it. The Slant is thus much more convenient to use than my Futur, because I don't have to adjust the gap.

I love it when analyzing and understanding a tool leads to better ways of using it!

"Crude diagrams" my b... This is a masterpiece and I can understand it. You must be an engineer and if you are you must be a progressive one to take the time to put together such an excellent piece of work that even a lowly artsman (not really, but businees admin., which is close enough) such as I can understand it.
T

I guess the next project that you could volunteer for would be to determine which blades have which kind of edge and thus would be recommended for the Slant. I've heard that the Feather Blade is the best with the Slant but one must wonder what the Merkur Blade is like and if not as good, why. I use my 37G occasionally and have had good luck with the Feather Blade. I'll try a Dorco and see how that works.
L

I find the slant can use a wider range of blades - they don't have to be super sharp.

A week of feather + slant is too much for my skin. But Derby + slant is a winning combination.

so has it been definitively settled that, when loaded and viewed from above, the Slant's blade should appear even with the razor head, and not unevenly exposed??? and if so, how did this come to be settled???

Thanks for a great informative post. Love the quality of the discourse here!

sphiny said:
so has it been definitively settled that, when loaded and viewed from above, the Slant's blade should appear even with the razor head, and not unevenly exposed??? and if so, how did this come to be settled???
Click to expand...

Trail and error. The latter being sometimes bloody.

Slant-Fan said:
Trail and error. The latter being sometimes bloody.

The first time I used my Slant I left the exposure uneven........not the best results.
N

The first time I used my Slant I left the exposure uneven........not the best results.
Click to expand...

Me too. also stinky results.