Shaving Brushes
These two Omega Pro 49 Professional boar brushes are essentially new. I have a black and a white one. I broke them in (which removed the lame stick-on labels) and used them only 2 or 3 times each. I’m asking for shipping only, which is approximately $7. If you want both the black and the white brush, $9 for shipping should work. The Omega model numbers are #OME-10049-black and OME-10049-white.

The Wild West Brushworks shaving brush (center of photo) has a 26mm Turn-n-Shave V6 Fan Tip Knot. It's a great brush with a killer knot if you're a fan of Milton’s high-density badger knots. New, the handle is $50 and the knot is $65. I’m asking $75 for the complete brush (shipping included).

Men’s Fragrances
If you’re not familiar with these fragrances, I would suggest checking them out on Fragrantica.com.

This Caron scent is one of my favorites but I bought more than one bottle because I heard that it’s going out of circulation soon. Le 3e Homme de Caron is a spicy, woody aromatic along the lines of a fougere. Fragantica has the notes as follows: Top notes are Lavender, Amalfi Lemon, Bergamot, Anise and Rosemary; middle notes are Coriander, Carnation, Geranium, Jasmine and Rose; base notes are oak moss, vetyver, Vanilla, Tonka Bean, Cedar, Patchouli and Musk. You can still get a new 120ml bottle on Fragrance.net for $70, so I’m selling this one for $50 (shipping included). 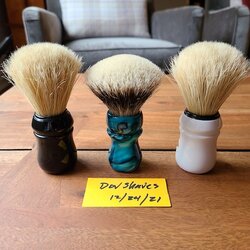 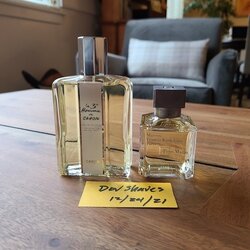 I would really like someone to have this shaving brush and the fragrances. So, here are reduced prices.

Happy New Year!
David
You must log in or register to reply here.

FS Time to Thin the Den (Razors and Brushes)