Flintstone65 said:
Thanks -- yes, I dealt directly with the owner in France. My mom spoke French before she spoke English (our family were French-Canadian immigrants to the U.S. -- I can recall the adults switching to french to keep the kids from listening in on sensitive conversations. My french is somewhere between barley-understandable and sort-of-conversational, but the seller was patient with me. The razor and case are definitely in "user condition", but that's the case with 95% of the stuff I have.

My wife is French Canadian as well. She speaks old French. She is up to speed on speaking modern French.
Last edited: Oct 9, 2019
R

Flintstone65 said:
Well there's something you don't see every day....I had to look that beauty up! A French-made vintage....not easy to come by....well done!!!
Click to expand...

Thanks Flintstone65. Glad to see that it inspired you to also use a French "rasoir"

Dog Whiskerer said:
Took the advice of @FoolishMortal and used a steep angle with the Old Type. An extremely audible shave, and it felt like it was scraping, not shaving, my stubble, but the results were impressive. Most importantly--NO CUTS.
Click to expand...

That's so great to hear! I agree with @Raven Koenes - it's counter-intuitive and flies in the face of all the "shallow angle" advice, but going steep has transformed my shaves. Razors that used to bite on a regular basis are now tame as house cats, and they don't scare me anymore. And yes, it can feel more like a scraping sensation, but I've come to enjoy that aspect, too.

DFS, time to walk on the beach! 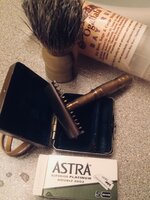 This morning, I used a USA Old Type and some Trumper's Coconut along with an Omega synth brush.

I must say the USA Old Type agrees with my face much better than the one made in Canada. Go figure, eh?

I am not going to subject you all to my lackluster photography again. No change from last time. Had a good shave, getting low on the Barrbarr which is sad.

I am not going to subject you all to my lackluster photography again. No change from last time. Had a good shave, getting low on the Barrbarr which is sad.
Click to expand...

But if you don't take a picture how do we know for sure it really happened?

Flintstone65 said:
Inspired by Bohin, but feeling like an SE shave, I decided it was time to trot out my L'Essor. The razor came with wedge blades (as you can see in the pic), but my wedge honing skills are still underdeveloped, so I opted for a GEM SS PTFE blade on it's 10th shave.

At first glance the razor doesn't look particularly special, but it has a nifty feature -- the back blade clip is not spring based, but rather tightened by turning the knob at the bottom of the handle. This twist to close-and-lock on the back blade clip and the nice and snug side clips (plus solid blade stops) meant that the thin GEM blade was nicely locked into place. Often these wedge-blade razors don't do a great job with the thinner modern blades, but this one was, shall we say, parfait!!! The shave was made even better with Modern Williams and my Omega boar....2-passes and a quickie witch hazel touch-up produced a super close and very comfortable shave.

That's a beautiful razor Fred thanks for sharing.

October 9th, OCtober Shave No. 4: The Lady or the Tiger? 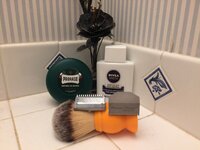 But when they all have teeth, which one's the lady? OK, enough pseudo-psychological claptrap! Let's talk about the shave.

This morning's shave was with the MMOC.

Soap, brush, aftercare all as illustrated.

Running the MMOC right after running the PAA Starling V2 OC is an experience in contrasts, which is why they're both in the picture. Also, I'm lazy and re-using the picture saves me time. [shrug] You would be forgiven for thinking that the MMOC, with deeper teeth and more blade exposure, would shave closer.

Granted, the blade has more use on it this morning than last day. My experience has been that there's a sudden leg down in performance after about shave 5, and another one at about shave 10 -- but that within those loose limits the shave doesn't change much day to day until WHAMMO. But this is shave 3. I find the first two shaves the absolute best with a PTFE -- which is one reason I don't cork or strop; works for me. Shaves 3, 4 and 5 are usually pretty good. So that's the blade.

I've found a setup that answers most of my objections about the Starling. Swapping out the aluminum PAA handle for a stainless handle (ATT Kronos, my favourite) made a huge difference. I would like it better if the whole razor was stainless, which would feel a little more balanced in my hand, but this is "purt neer" perfect. I get very smooth comfortable shaves out of it this way.

The MMOC (with bumps, if that matters) looks like it should be more aggressive than the Starling. It doesn't glide as smoothly in the shave, but for all the teeth and claws (blade exposure) it leaves more behind than the Starling does. I'm not too wrapped around that, because part of why I use the MMOC occasionally is to remind myself why I don't use it all the time. My main objection is simply that the styling of the MMOC creates an ergonomics that doesn't please me.

I can work with it, but were I to use the MMOC every day some things would change. And considering the closeness of the shave, I'd pretty much HAVE to use it every day to keep things planed off.

But, in the spirit of OCtober I can deal. It's a fairly comfortable shaver -- though oddly enough for a razor that leaves a little behind it also tends to irritate my skin more than the Starling. I will say I've learned when to quit grinding away at it, and further that I even occasionally listen to that little voice in my head and quit before things get tender.

Next up: We jump into Old Hippie's Groovy Electric Peanut Butter Time Machine and haul out a razor whose teeth are so old they could be a third set of dentures; the Kampfe Brothers "Star New Model." Stay 'tooned! 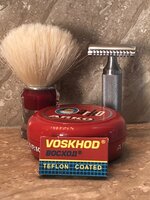 The New SC is just as smooth as the LC but I believe the SC gives a slightly closer shave. 2 pass with touch ups. Great shave. Tomorrow maybe use a Fatip. 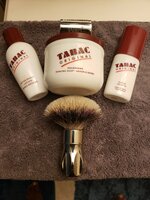