Newbie finding my way around

Moderator
Welcome to the forum from Australia and thanks for checking in with us. 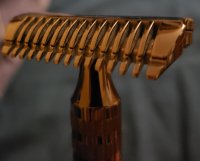 JCinPA said:
Welcome! Quite a spread of razors you have there. The red tip is a bit more aggressive than your 34C, they bracket from mild/medium (34C) to fairly aggressive (red tip). How did you find those, if you don't mind my asking? I tried quite a number of razors back in the day and finally settled in on the 34C as my "daily driver" for a long time.

You'll have fun here, I can tell!
Click to expand...

Ah, the journey! I had kept a beard for two decades but always hated the waste and expense of cartridges, so I figured I would go DE. I read up on discussions and there was strong agreement that 34C was a good razor to start, so I got one. I worked on technique and worked through blade samplers but found that I couldn't get close enough. I'd have to do extra diagonal passes and still end up hacking when I got to ATG. Also, I was on a budget quest to find a blade (preferably inexpensive) that got me three good shaves, and my best blades in the 34C were only getting me one. (The best ones, I'll note, were LOI Titanium, Voskhod and Feather.)
My grandpa had a Slim, which my brother inherited. I visited him and tried it with a blade I had tried multiple times in the 34C without success (a Gillette Platinum), and it had no problem getting close. I have no idea how high I cranked the dial, but it was high enough to get BBS and a few nicks. I knew that if I could get close, I could work out the kinks and learn not to cut myself. So I bought my own Slim. That's been most of my journey, finding the right adjustable settings, blades and technique. I'm still learning on that one, and still figuring out how tame wild blades (Bic and Astra SS, to name two, used to burn me like crazy but now I'm getting good shaves out of them.)
The Red Tip was a lark. I bid US $12.95 on an auction and really didn't expect to win. I really didn't know if the shave would be any different than a Slim stuck on a certain number, but I thought it would travel well and perhaps something (geometry? rigidity?) would give it a different feel than the Slim. The jury's still out on that, but I really enjoy the weight of it, and the shortness of the handle in my hand. The knurling also works better when wet than the slim, which gets slippery.
Not being adjustable, the Red Tip tends to leave some stubble along my jawline that I could dial up the Slim to take care of. I shave every other day and need a shave to keep me acceptable into at least part of the next day for work, so I need it as close as I can.
Of course, I can always go back to the Slim! But a few things about the NEWs (and Olds) intrigued me, but that's another story. Thanks for asking and pardon the wordy reply!

Is that real? It looks like something out of a fever dream. You could take of the cap and comb your hair with it!

slimshavy said:
Is that real? It looks like something out of a fever dream. You could take of the cap and comb your hair with it!
Click to expand...

Defqon 1 said:
it sure is real mean lookin' like it could chomp your face in half but with careful technique its one of my smoothest razors because it puts alot if torque on the blade (the blade remains very steady and still) thus less "blade chatter" let me know if you want some more info on it
I have had many a smooth shaves with this creature
Click to expand...

D
Greetings from a northern newbie!
2