*The story
So recently I noticed a couple of different people posted these blades for sale and it peaked my interest so I decided to look for the best price.
What was instantly interesting about the blades was what it said on the back (seen in a picture below). It says it was meant for a depot in Yugoslavia which, I hope most of you know, no longer exists as a country. Although Yugoslavia technically existed until the early 2000s something that pointed to these blades being a lot older (apart from their rounded design) is the phone number on the bottom. The label says it was meant for Belgrade and it gives the address (which still exists but something else is there) and the phone number. This format of the phone number is extremely old. I can't say for sure but in the 70s, a 6 digit format was well in use in Belgrade.
I couldn't find anything online about these blades but one of the sellers wrote this in the ad (so take it with a spoon of salt): These blades were meant for the general population but they were ceased by Nazis, who were occupying Belgrade at the time, for their own use. However, the war ended very soon after and the blades stayed stashed until recently. How they acquired them, I have no idea.
Each person was selling a box with 10 packs of blades in it for different prices and I managed to get one for ~8.5 Eur or 9.2 USD. 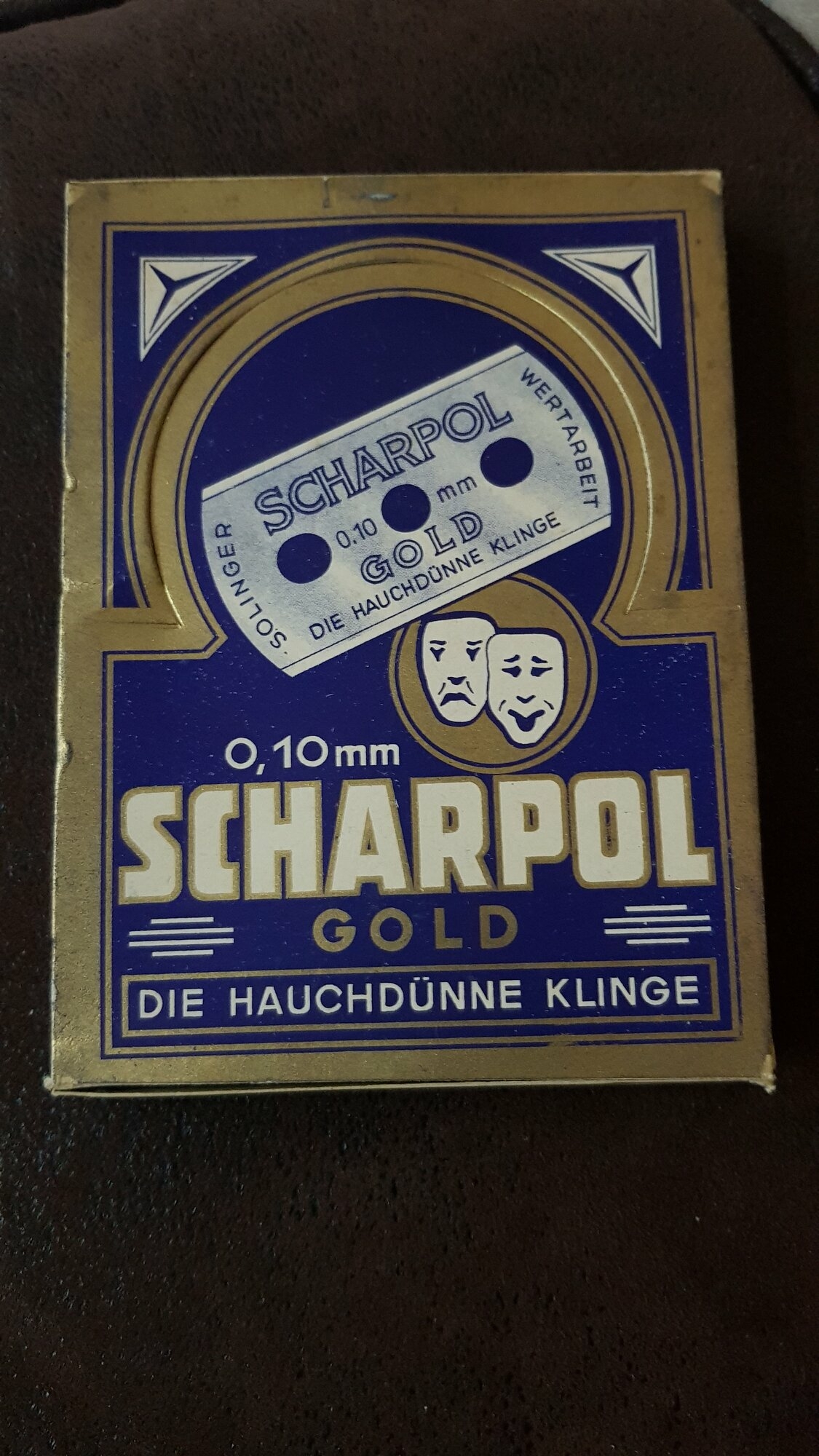 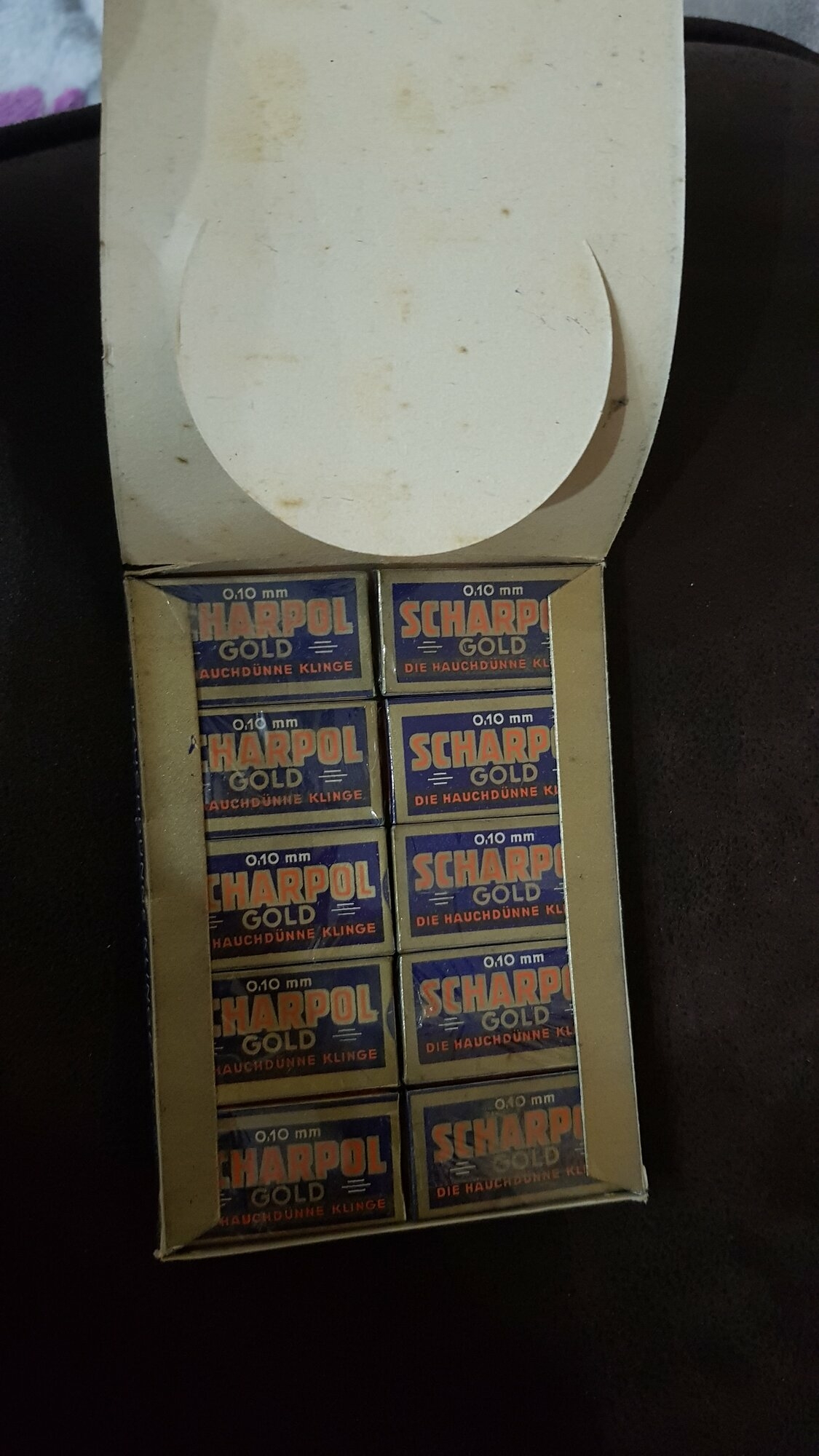 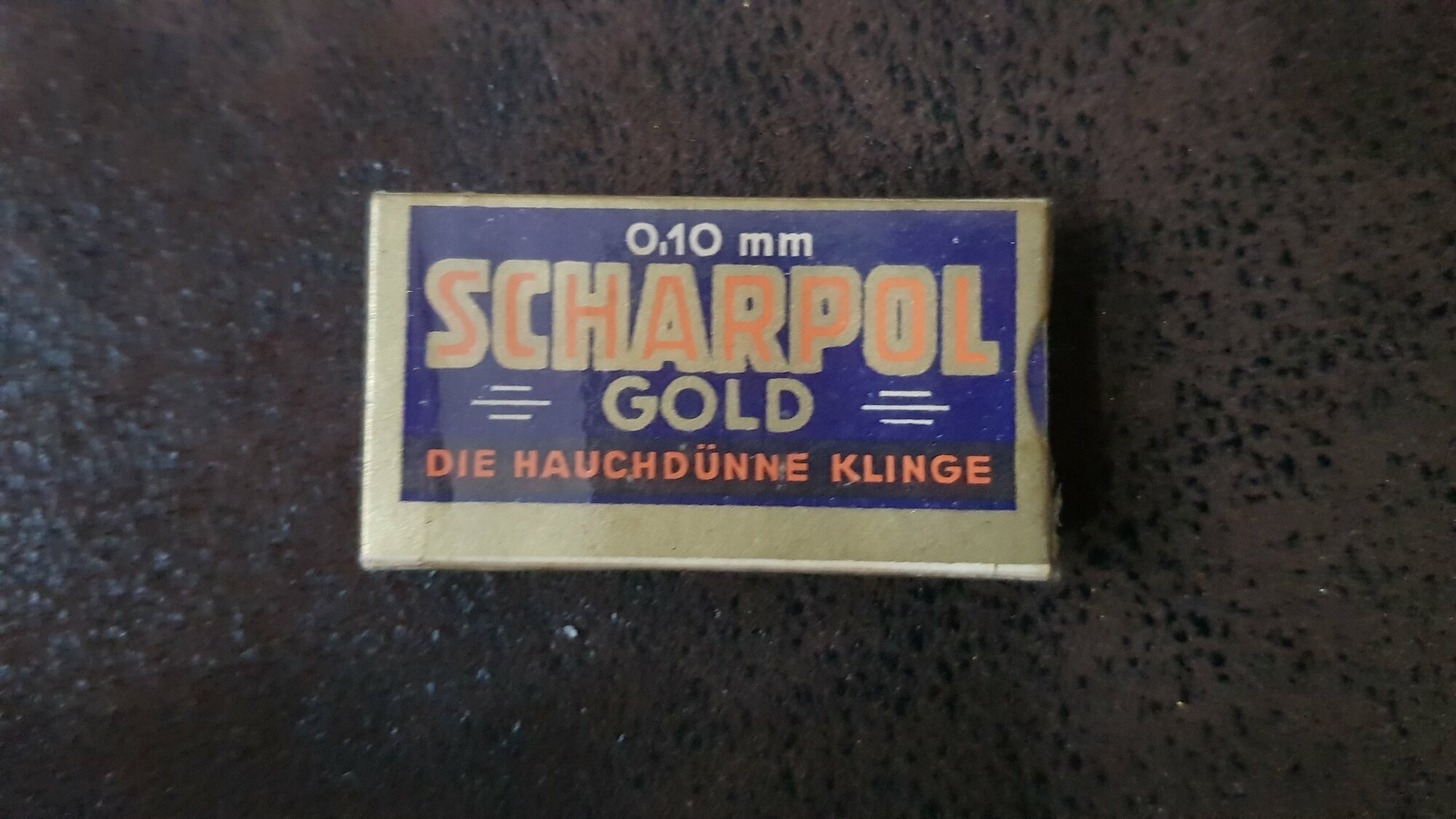 *The blades
Each pack is wrapped in plastic (which is falling apart on touch because of its age) and contains 10 blades. Each blade is individually wrapped (both sides of the paper visible below) in an 'envelope' and once more in what might be wax paper but very old.
As seen in the pictures, the blades have rust-like stains (I'm no expert so I can't say it's actually rust), however, the edges of the blades do not have stains, that is why I decided to try them. 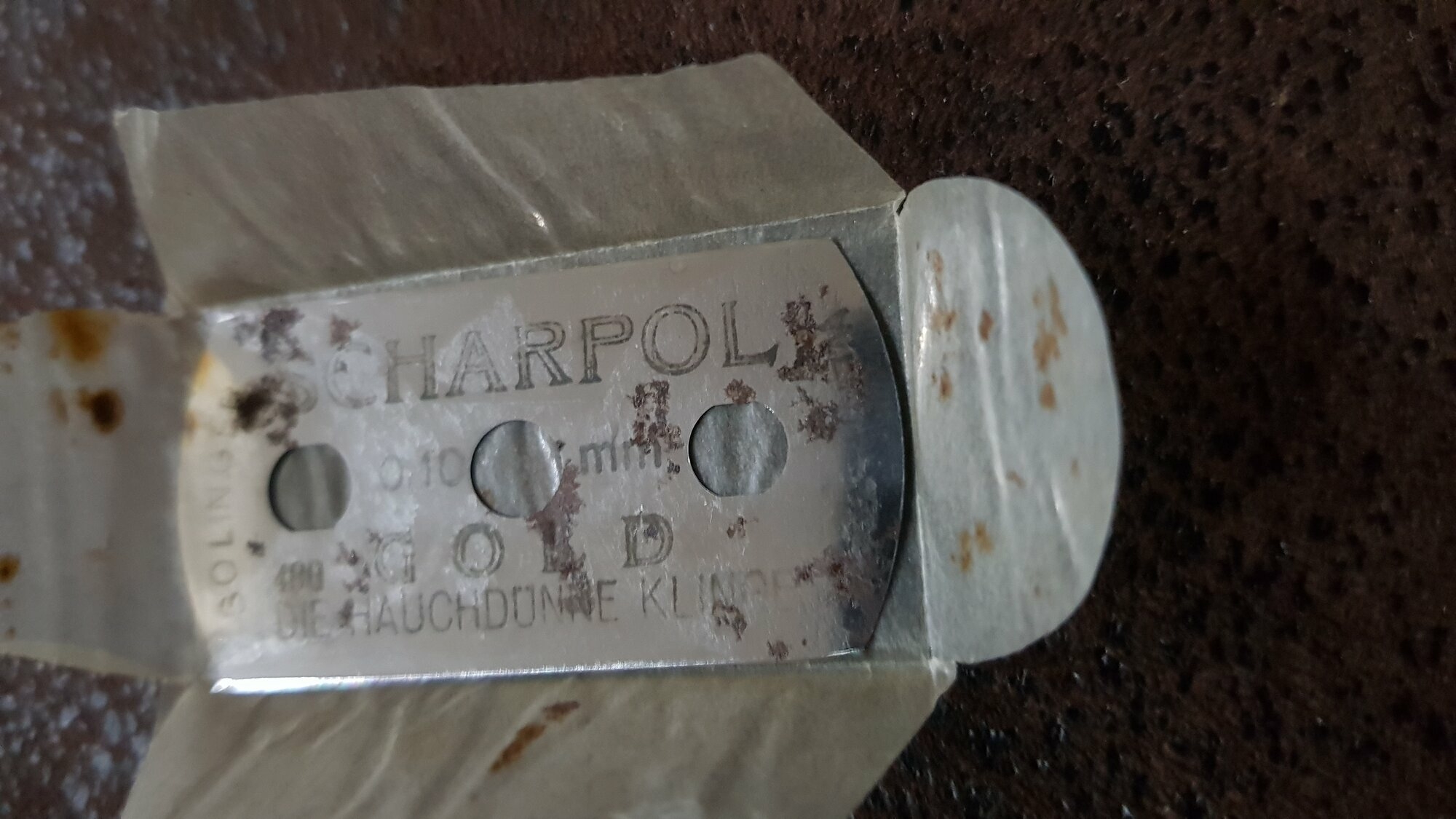 *The razor
I wanted to use a razor which was probable for someone to use in the 1940s. However, I don't have that many razors and the closest I have is a 1950s Super Speed which would be cheating so I went further back to a Ball End Old Type. I think that would have been a realistic scenario. Here's what it looks like loaded: 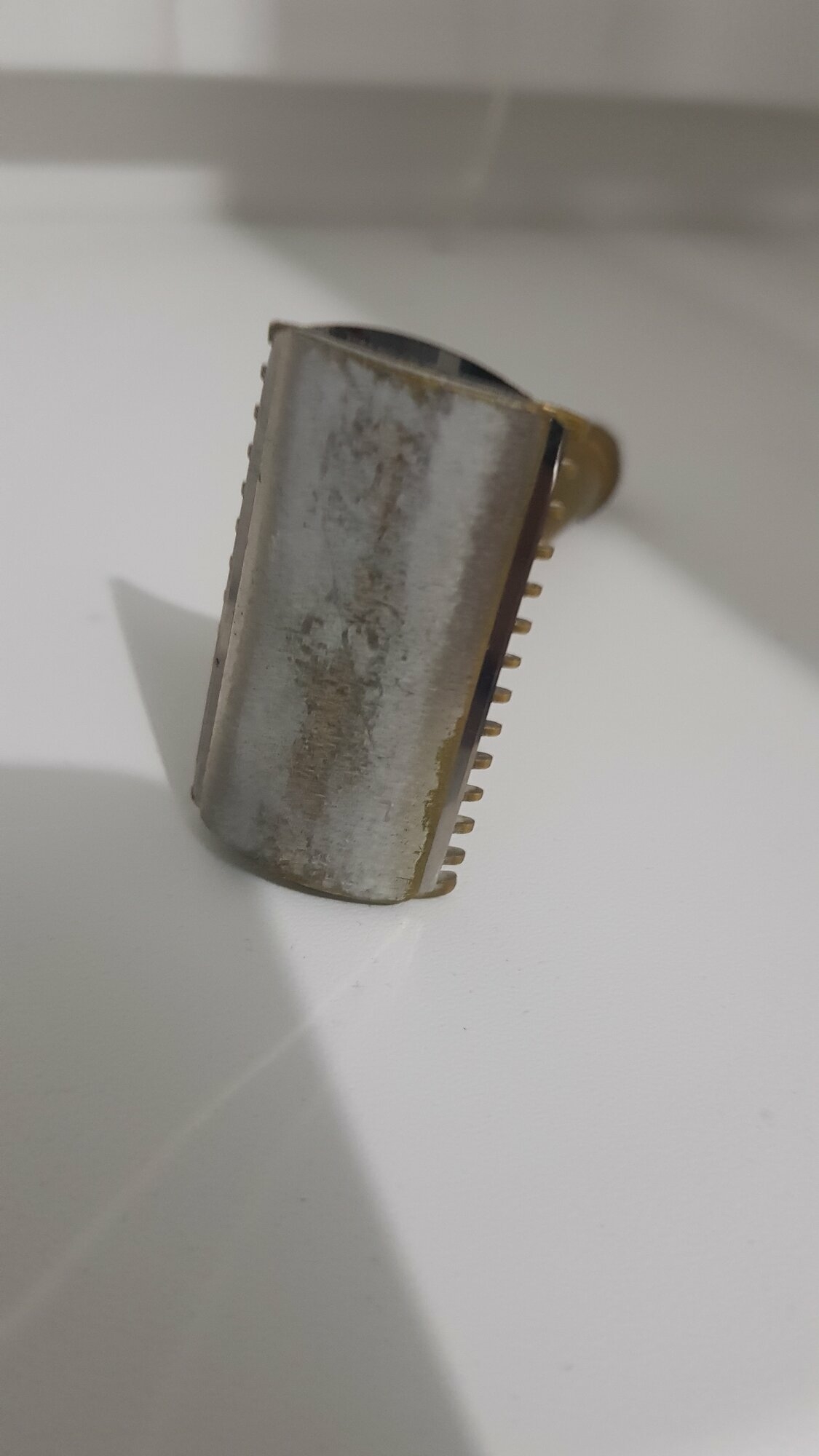 *The prep
My prep is really simple and I never had problems with it: Plenty of warm water on the face and Arko soap with the Proraso/Omega boar brush.
Before trying this combination I was using Astra SP in my Old Type and got wonderful results so I was used to the OT.
*The shaves
I have very thick whiskers so I shave every day. Usually just WTG and sometimes XTG when using something mild.
1. From the first stroke I knew it was going to be a far cry from modern blades. These blades were rough. Not dull, they were efficient, just not smooth. I don't know if it's the old technology for sharpening or the possible absence of coating but these were simply not smooth.
I did my usual routine when using the OT: One "Gillette slide" (diagonal strokes) pass WTG and another one for cleanup.
When applying the aftershave I noticed that it gave me a DFS but my face did feel a little abused. I had no irritation or nicks, just a bit of an unpleasant feeling. That feeling however, went away very quickly.
2. The second shave was noticeably better. I don't know if I got used to it a bit or I broke it in but it was better. The blade wasn't as rough as it was the day before. It still wasn't as smooth as modern blades but a lot smoother than before. Just like most blades, it got better after the first use. Same routine, very good results.
3. The third shave was just like the second one. DFS, no irritation, no unpleasant feeling.
After the third shave I decided to bin it. Not because it was dull, I believe it could have gone for a couple of more days but the blade was now actually rusty. So that's the whole story.
I apologize for the long post and hope you found it interesting.
As for the other blades, I still have them and will probably use a couple more and sell the rest.

Interesting find! Thanks for sharing your experience!

Thank you for sharing this !

@SuperSilver, history and finding use for old things are two things that resonate with me. I really enjoyed your post. Thanks for sharing the history, those images, and your courage to load and use those Scharpol Gold blades. Wonderful!!!

Thanks for the photos and for sharing your story!!

Very interesting post. Thanks for giving them a try out and reporting your findings here. I am always reluctant to try out older blades but many members here swear by them and use them exclusively.

No, rust does not cause tetanus. I presume the blades were not stored in a stable or cowshed.
You must log in or register to reply here.

Do Treet blades have a reputation for rusting?

Sharp makes sense, but what is smooth?
2