New contest for a new item!

I am in. Mid 80's northern Illinois I was in high school parents would not let me go out of town to get my girl friend and her friend for a double date. Since I already had rented a couple of VHS movies. I was about to go get a couple of buddies that lived in town and pizza so we could watch the movies at home. It was -26 outside parents had a wood burning stove and the basement was 110. That will take the chill off quickly.

Random.org has selected our three lucky winners. They each just need to email me their shipping address at: [email protected]

Congratulations to each of you and thanks for all who entered. Keep your eyes open for the next contest!

I thought it would be fun to let you in on the coldest The Captain has been. It would have been about the winter of '76-'77 and back in Iowa it was seriously cold, even for there. I had a 1953 Dodge truck that looked like this one: 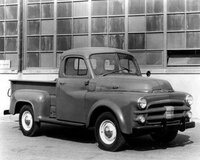 We had 42 days in a row that it never warmed UP to zero - that is, temperatures were negative for that many days in a row. Broke all kinds of records. My truck had a radiator heater so it could be plugged in every night and it started every morning, no problem. But once it was started... The tires were bias ply tires, anybody remember those? The portion of the tire that was in contact with the driveway would freeze each night. So as I drove off in the morning at literally less than five MPH those four frozen flat spots would roll around and all come in contact with the pavement at the same time. And they were frozen stiff. So every rotation was, "WHAM!!!!" (Truck shakes wildly) Next was, "WHAM!!!" (Truck shakes wildly) and on and on down the residential street for about 1/4 mile when the rubber would start to round out and not slam. I was so relieved on the day it was +5 degrees and the tires didn't slam on the way down the street. Gads!

Moderator
Congratulations to the winners, thanks again Captain’s Choice for the very generous offer.
S

Awesome, thank you much! Really excited to try this out and thank you for your generosity!

Congrats to the winners. Thanks, Captain, for giving to the community.