Antica Barbieria Colla has re-released their hard shaving soap. This is a reformulated soap, not the same as the old version of a few years ago. Ingredient labels shown below.

Price: the new version is about $32 US for 125g delivered from ABC (I bought 4 to get free shipping and they emailed a free product offer which I have not yet redeemed). The old version retailed for about $70 US from US resellers but was cheaper from ABC, about $45 IIRC.

Consistency and appearance: The new soap is denser, whiter, smoother, and with a translucent waxy appearance. It is a palm oil soap. The old version was more opaque, less dense, less smooth in appearance, less white, and was a coconut oil soap. Both are hard cured non-milled soaps similar in consistency to Martin de Candre, especially the older version.

Scent: Both are a very light almond scent. They could be considered unscented by many.

Ease of lathering: Both are easy to lather, the old version is a bit easier to lather as expected, sharing a formula very similar to MdC.

Quality of lather: Both excellent, the old version is more MdC like though it was better in all aspects, especially post shave feel. The new version‘s lather is still rich and creamy but a little slower to lather and a little thinner, though I expect that more loading would add to the new version’s lather density. One very nice quality about the new version is that it is very slick, like SV beta 4.3 slick. Shaved skin loses some slickness if it dries, but a quick wipe with wet fingers brings the slickness back without re-lathering, very much like SV beta 4.3. Post shave is still excellent. 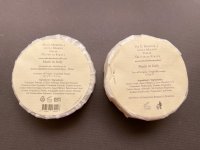 Badger in the Sun

Awesome comparison. Thank you. ABC is a soap I've been eyeing for a while.

Moderator
That's quite a considerable formula change! Like a brand new soap.

Nice review, thanks for the update.

Moderator
Contributor
What about shaving naked?

j/k. That is a great review and pic to go with it. Appreciated.

Excellent presentation! Thanks . I'm glad they lowered the price. $ 32 is a price closer to reality. Overall, in your opinion it is over SV, which offers a larger amount for the same money?

alin said:
Excellent presentation! Thanks . I'm glad they lowered the price. $ 32 is a price closer to reality. Overall, in your opinion it is over SV, which offers a larger amount for the same money?
Click to expand...

Is there a noticeable difference in performance of soap vs cream?

anoop said:
Is there a noticeable difference in performance of soap vs cream?
Click to expand...

I think it's still a pass for me as the almond scent is most likely derived from benzaldehyde, which lights my skin on fire.
A

shavefan said:
I think it's still a pass for me as the almond scent is most likely derived from benzaldehyde, which lights my skin on fire.
Click to expand...

Where did you find out about this?

anoop said:
Where did you find out about this?
Click to expand...

Benzaldehyde is the most used fragrance for 'almond' scent. Several years ago I tried many traditional Italian shave soaps that were almond scented and all resulted in irritation of my skin. It took me a while to find the cause but I narrowed it down to the common denominator which is benzaldehyde.

However, I think Wholly Kaw uses a benzaldehyde free almond scent so maybe this new formula from ABC does as well. Matter of fact, I'll email them with the question and update here.

Update to my original post after using it several more times - not much to update really.

Blooming the new version a little helps, and if bloomed it lathers about as easily as the old. Just put a little water on the surface while you shower/prep and life is good.

The lather is a little lower structure than the old, but the lather is still far better than most competitors. This is a non-issue but since I was doing a comparison I mentioned it.

And that’s about it, the initial impressions were pretty close considering they were based on one shave. I am considering that ‘slightly inferior’ may be incorrect, it’s just different.

ABC is having a buy three get one free sale until October 16th. As you might suspect, it isn’t quite as simple as that. If you buy three products, the CHEAPEST additional product is free, so you can’t buy anything cheaper than the soap - not that this is much of a problem at ABC! Next, €100 gets you free worldwide shipping, but you’ll have to buy 5 soaps to get free shipping where it used to be 4 ex-promotion, but not to worry, if you do so, 5 soaps are the price of 4 without the promotion. Christmas is coming quickly and shipping is likely to be an issue this year I think.

I just received the soap. It’s not as good as sv or any artisan soap out there but I still like it. It gets the job done. For me ethos is top quality artisanal soap and abc fits the bill when I want to use something more traditional.
You must log in or register to reply here.