Needing help with this antique set.

I've tried to find any details of this razor set for couple of days and literally haven't found anything info except that this is german. Seems like this set is missing some pieces. That can have carbon(?) In it. 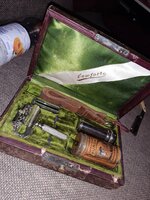 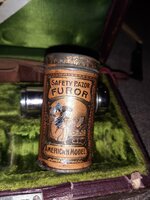 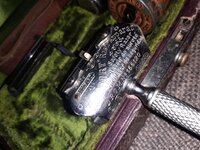 Values are not allowed on the forums, but it looks like a great razor. Very nice.

Moderator
Welcome to the forum. As mentioned by @Lightcs1776 we are not allowed to do appraisals on the forum. It is a very nice old single edge razor. That is all that I can tell you. Hopefully another member will know more about it. Call out to @romsitsa who might know a little.

Welcome to the forum !!

Glad you found us, welcome!

Welcome!
It is a "lather-catcher" type razor from the turn of the 20th century, one of the earliest types of safety razors.
Kampfe/Star, Ever Ready and Gem are much better known and more readily-found brands of this type of razor.

These kits would commonly come with several branded wedge-blades and slots for keeping them in the case. I see you have some, but if they are not "Comfort" brand, then they are not original. The blades didn't last forever, but were touted as having a life-span of at least 20 years, so many kits are still found to-day with some of their original blades.
A similarly-branded strop, especially sized to suit the width of the wedge-blades was included. The original strops rarely survive, at least in usable condition.
The kits also contained a blade-holder for stropping that attached to the end of the razor's handle and was then stowed away inside the handle when not in use. Yours appears to be missing the blade-holder. It was an extension to the handle. See here with blade holder stowed:

And here with blade holder out for use:

Also, the tin is not original to the set. Furor was a competitor brand.
Furthermore, the tins were sold on their own, with a complete razor stored inside, broken down, of course. They were suitable as a budget form of travelling case, but what you have is a deluxe kit in a luxury travelling case. Thus, I don't believe it would have originally included a tin.
However, your set probably originally contained an enclosed travelling shaving-brush and round shaving stick case, possibly even a comb and cosmetique (cosmetic cream), as these were often included in deluxe travelling kits. So, the space holding the tin originally held something else.
Finally, while the case is certainly branded "Comfort" it doesn't necessarily follow that the razor is correct to the case.
That is a question for some-one more expert than I.

ps. By the way, the "Atlas" brand razor looks virtually identical to yours and may suggest the same manufacturer, see here: 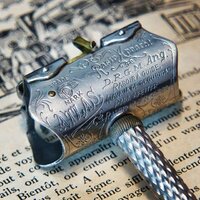