Been conditioning this wedgeway off and on since lapping. I think it is finally at equilibrium. This may well have potential, it feel very cohesive and clean. Be interesting to see if the fine "gummy" edge means this was made to cough up a smoother edge than most of these. 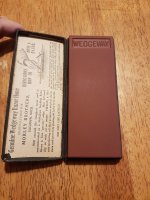 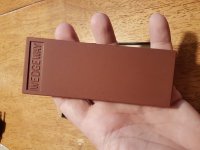 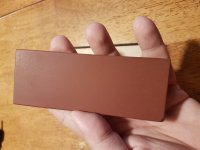 Contributor
Gummy is an interesting adjective to describe an edge... maybe what we think of as "coticule feel"... doesn't seem sharp but cuts hair well?

Anyway, Yesterday was the mystery frictionite with the popcorn effect on the sides. It's a Black/Grey stone. Grey side has a grit you can feel to the touch, Black side feels like glass to the touch. Both feel very aggressive (and gritty, not like finishers) under the razor. Was very strange. Few hones feel as smooth to the tongue test as the black side did, but it felt midrange at best under the razor.

Shave resulted in quite good comfort. Little noticeable irritation, a small amount of a/s burn. No significant complaints, but not ideal either.
Closeness was almost patchy. The easy spots were smooth, but the more difficult spots were pretty prickly still in both XTG and ATG.

Based on performance and behavior, this seems more like the American Buddy than the 00's... though it definitely feels coarser under the razor.

Kind of looks like the "exide" hone, came in two sizes.
The smaller one had rounded corners.

Contributor
Gray matches. Black looks a bit different than I remember exide being, and finer.

Contributor
Today’s shave was the synthetic coticule. These stones seem to vary a bit. Of course there are the JGES ones which are VERY coarse... but of the slate backed white ones, most seem quite fine... what varies is speed and hardness. David lent me one a few years ago that I felt was a bit slow and very soft. I’ve owned a few since which ran between this and that one, and kept this one because of the size (it’s about 7x3”). This one is very hard and moderately fast.

The shave was very good. Only a little irritation and one of the closest in recent memory.

Moderator
People are usually bummed when they get those

Contributor
They can be pretty slow. If you approach one like it’s a coticule, you may have trouble. This honing took about 70 passes off an 8k... and it’s a big one. 100+ wouldn’t be improbable in a lot of cases. They also don’t repair or cover up bad midrange work like coticules often can.

Dcaddo said:
People are usually bummed when they get those
Click to expand...

Lol I had more to say but got interrupted and didn’t realize that got posted. I was going to say people are bummed when they get those but they’re actually pretty decent stones. Most guys buy them as cotis so I can see their frustration but I’d rather have one of those than most of the other B-Hones. Once you get an eye for them you can spot them a mile off

Contributor
I’d rather have one than an equally sized average coticule. They’re good finishers. 1.5x6” coticules are a dime a dozen and these are much rarer.

Another great review.
When I got my first syn coti, I was bummed thinking I found the real deal. I was edumacated to what it was and put on the back burner. I only had a few dollars into it, so what. It was not until I used it for the first time and found out what it was capable of doing. Consistent edges every time. It is now a hone that I am glad to have in my arsenal

Contributor
Itsapeach got a retest this morning. I scrubbed the hone thoroughly and used the front side this time instead of the back. Made a pretty big difference. Although I’m not sure what to attribute that to. Comfort went up by a large amount, and closeness went up a little.

Shave was much improved. It IS painfully slow... to the point where it’s one of the few hones I wouldn’t recommend going to off 8k.
It also doesn’t seem crazy fine. It lost some closeness vs the Thuri, and while there wasn’t much irritation, it definitely felt like it wasn’t super sharp during the shave.

Overall 88/100, but not ideal because of how slow it is. Given how slow it is, I can’t even say for sure that it wouldn’t get worse with more honing (still surviving on the Thuri finish). Also virtually no feedback.

Contributor
Peek in retest (dry) came and went. Not enough of a difference to justify a new score. The difference was I was comparing it against a lot of junk last time and this time the majority of what I'm testing is decent.

Brought a duck up to 8k and went to the wedgeway. Going to see what a "gummy" edge means to the people that made these. It doesn't look horrible under the loupe or anything, though it does not provide the gorgeous mirror the ohishi 8k does either.. No trace of foil no weird sounds on the strop.

Well, Wedgeway (at least this example) is a very credible barber's hone. I guess gummy means smooth to them because there was no real harshness to speak of and more than sharp enough.

Forgot to mention, sewing machine oil buffer. Used the unstamped side as it all seems the same. Good stone though, it's no jnat but once my face dried the shave was actually really close fwiw. It would be interesting to see whether the edges improved with surface break in. The edge definitely seemed more gentle than the norm, usually synth or paste edges trigger my dermatitis something awful on the sides of my chin but nothing.

Contributor
Yeah, I'll say that I've definitely discovered there are a good amount of decent razor hones out there, and a few good ones. Trouble is sifting through all the bad ones.

And also they are rarely consistent. Swaty's are the most egregious example of this, but probably only because it's a numbers game (they were made for many decades and countless numbers were sold). So far the synthetic coticules are the only ones I'd say strike me as both consistent and good. Frictionite 00's seem pretty consistent, but I'm far less impressed with them than most people seem to be. And I've had maybe another ten or so that perform about as well as a 00 (but none which I've had enough of to confirm they are consistent), and a half dozen better quality ones. Thing is the stones I've gotten duplicates of (outside of the Frictionites, Brazilian quartz and synth coti's) they all vary, and breakdown isn't the cause. I suspect most stones from that era just were inconsistent, and people dealt with it. Given that, even with the barbers hones that give me a good shave, I'd hesitate to recommend them.
You must log in or register to reply here.
Share:
Facebook Twitter Reddit Pinterest Tumblr WhatsApp Email Link
Top