MY JOURNEY, AND REVIEW, OF THE CARBON SHAVING CX-316-L

So here it is. After a few weeks with the Carbon Shaving CX-316L, I’m finally ready to give my opinion on it.

Since this is my first “quality” razor, take what I have to say with that understanding. I have no other experience with DE razors, other than my first one – a Merkur 38C Barber Pole.

I love the Merkur 38C Barber Pole razor. It was my introduction into DE or “wet shaving”. Because of what I had read, specifically about letting the weight of the razor do the cutting, I have always pictured that in my minds-eye. The Merkur 38C has a longer handle than most. And because of that extra length, it was exactly what I had expected. I was in love since my very first shave with it.

So naturally, my first high-end DE razor would have that similar trait.

My journey had me going in a few (general) directions. But I finally narrowed it down to the Carbon Shaving CX-316L.

A “HUGE” factor for this boy was that it had to be American-Made. I will always patronize (give my hard-earned, taxed dollars) to American-Made products over others…when possible.

I’m not saying there are not spectacular products out there from other countries, because there are. But this was just my “put-my-money-where-my-mouth-is” opinion. Nuff Said.

Upon receiving it, I was pleasantly pleased. My initial observation of the presentation, and the packaging container, were impressive. Pride was taken for the safety of the razor during shipment. And you can also see that they took their time with the kewl design of the colors, style, and fonts, used for the container.

I was already smiling before even opening the container.

Upon carefully opening the container, I was even more impressed. They had the razor itself wrapped in a small hemp or twine sack. (Smiling bigger).

When I pulled-out the razor, I was totally digging the polished head, and how small and low-profile it was. Exactly what I wanted. (I always have difficulty getting those whiskers, tight under my nose). The second thing that immediately caught my attention was the milling work. I really liked the small diamond-shaped pattern on the raised parts of the handle. They made for a nice grip.

The shape of the handle was unique. And from all the positive things I have heard about it, it was still a gamble for me in the long run. I didn’t know if I would like it or not. But upon holding it for a while, and playing with it in my hands, it started to grow on me. I realized after the first few times using it, that the deeper middle area of the handle provided an excellent grip for me.

The diamond-patterns are great. And those in themselves provide a nice grip. But let’s say, hypothetically, that I happen to get some fresh lather on my hand that is holding the razor. My hand “may” slip off the diamond-patters. But if my fingers are in the deeper middle portion of the handle, it will never slide off the handle. (My sliding fingers will meet the raised portion on the middle part of the handle, and stop). Hope that made sense.

Going on with the shave.

I shave both face and noggin. And as we of the same camps are familiar with, the skin of the face and head are totally different. The skin on the face is thicker, fuller, more forgiving. Whereas the skin on the noggin has much less cushion, and every little pimple or mosquito bite is prone to be nicked. So my goal was to find a blade that would be a good medium. One that would give me, both, a good head and face shave.

I know, I now…just swap out razor blades if I have to.

Nope, I wanted that “do all” razor blade.

But I’m getting a bit ahead of myself.

The first blade I used was a Kai.

I went at it with full confidence, with a cracee-sharp blade, and with no knowledge of mid-aggressive blades.

So my journey with a mid-aggressive razor started.

The first step was understanding that “blade gap” is a dimension that people (and manufacturers) use, but does not really tell you much about shave comfort. So my first learning experience was that “blade gap” was correlated to blade angle, and was important to let lather and shaved whiskers through. I doesn’t really tell you much else. (Unless you get more, specific, dimensions on the razor. And you know how to use all that other information, in conjunction with the “blade gap” of the razor, to understand more of how that razor will shave).

What does that mean?

The Carbon Shaving CX-316L was already a “blade positive” razor design. And on top of that, because the Kai is one of the widest razor blades, it made the blade stick out even more.

I got a super clean shave that first time…along with removing a bunch of upper dermal layer of skin from my face. Massive, rosy red, razor burn.

So the next step after understanding all of the above, was to experiment with different razor blades to find the perfect match for me while using the CX-316L.

When I wrote to Sean, the owner of Carbon Shaving for suggestions, he told me the Astra blade was a solid blade to start with.

Evidently he has a set list of razor blades that are mild, neutral, and aggressive, when used with the CX-316L. Heck, let me quote you the partial response he gave me:

“Regarding blade choice, we use Astra for prototyping and built and tested the configurations using the Astra blades for consistency.

Everybody has a preference but some blade choices our customers have recommended, that I like are:

Polisilver (although they are no longer making them as of recently)

Gillette Nacet, similar to the Polisilver in that it tames the Cx down a bit if you prefer a milder feel.

Kai blades are if you are looking for a stiffer blade feel”.


And using his guidelines, that is where I started.

I used the Gillette Nacet and the Personna MedPrep to try a milder shave.

I used the Feather and Astra (because of similar widths) to try a medium shave.

And then I tried the Kai again, being more cautious now that I understood it was super sharp, and super wide. (More blade positive/aggressive).

The milling tolerances are also super tight on the razor. When I place the Personna MedPrep into the CX-316L and tighten it down...I can hear the tiny squeaking of the razor blade as it is getting tightened-down onto it's alignment tabs. There is absolutely ZERO adjustment of the blade needed to get it properly aligned on the razor. Those are some incredibly tight tolerances!!

May I also add, that along my journey I have also come to realize that the lather you make, and the angle of the razor while shaving, also plays a huge factor in all of this.

Using the Personna MedPrep, I use more of a “neutral-angle” shave angle. (I ride the top and base of the razor evenly across my face, as the flesh is fuller and can give a bit more). But on my head, with the same Personna MedPrep, I use a more of a “steep-angle” shave angle. (I ride the base a bit more, as the skin is thinner, less resilient, and more prone to nicks).

It has been an awesome learning experience, and I am getting outstandingly close shaves now. Being a bit OCD, and seeing that I shave at night before going to sleep, I have plenty of time to wind-down and meditate on my shaving. I usually do not stop until my head is nasty-spanking loud. (Baby butt smooth).

Beautiful razor. It was pricey, but well worth it. I have no regrets whatsoever.

And sorry for the soapy film that was still attached to parts of the razor. I THOUGHT I cleaned and wiped it down better. But the close-up shots revealed a bit of lather residue that was not gotten.

But then again, like I started-out saying, I’m no pro. My DE razor experiences are limited. And I’d be super hesitant to try an aggressive one. But based on my thick-beard daily face shaves…and thin-hair head shaves…it’d be too much).

Did I mention I just purchased a new straight razor? 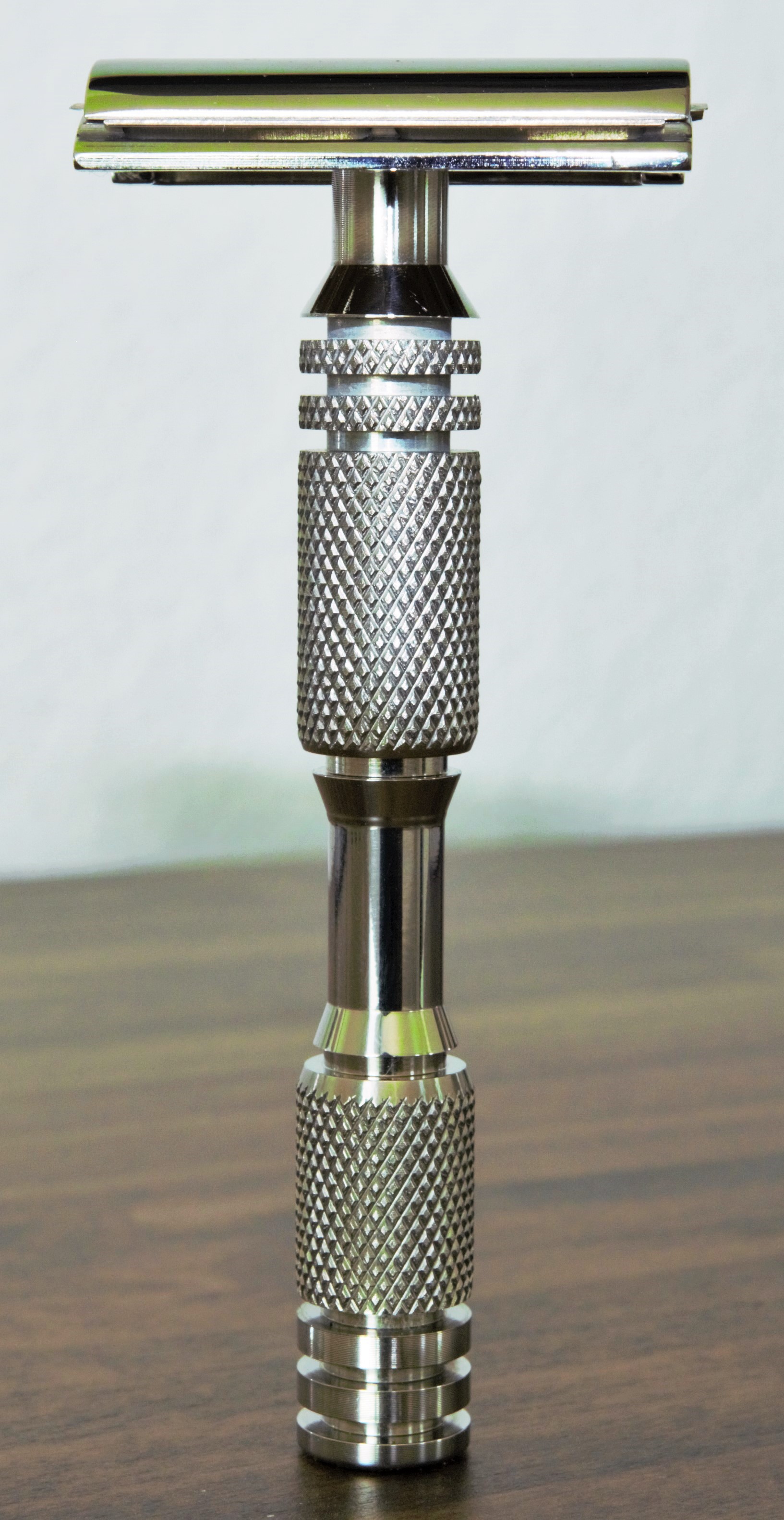 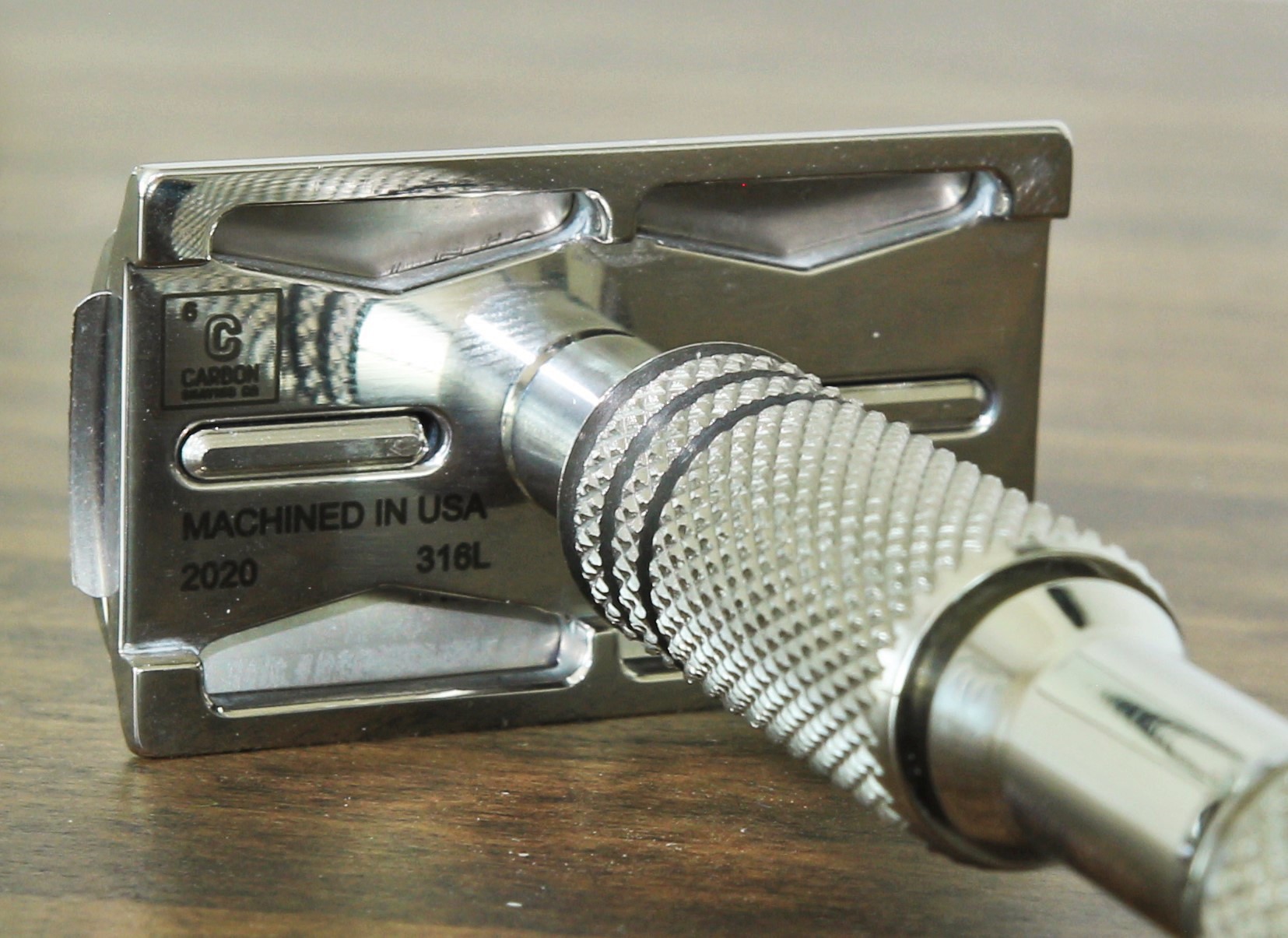 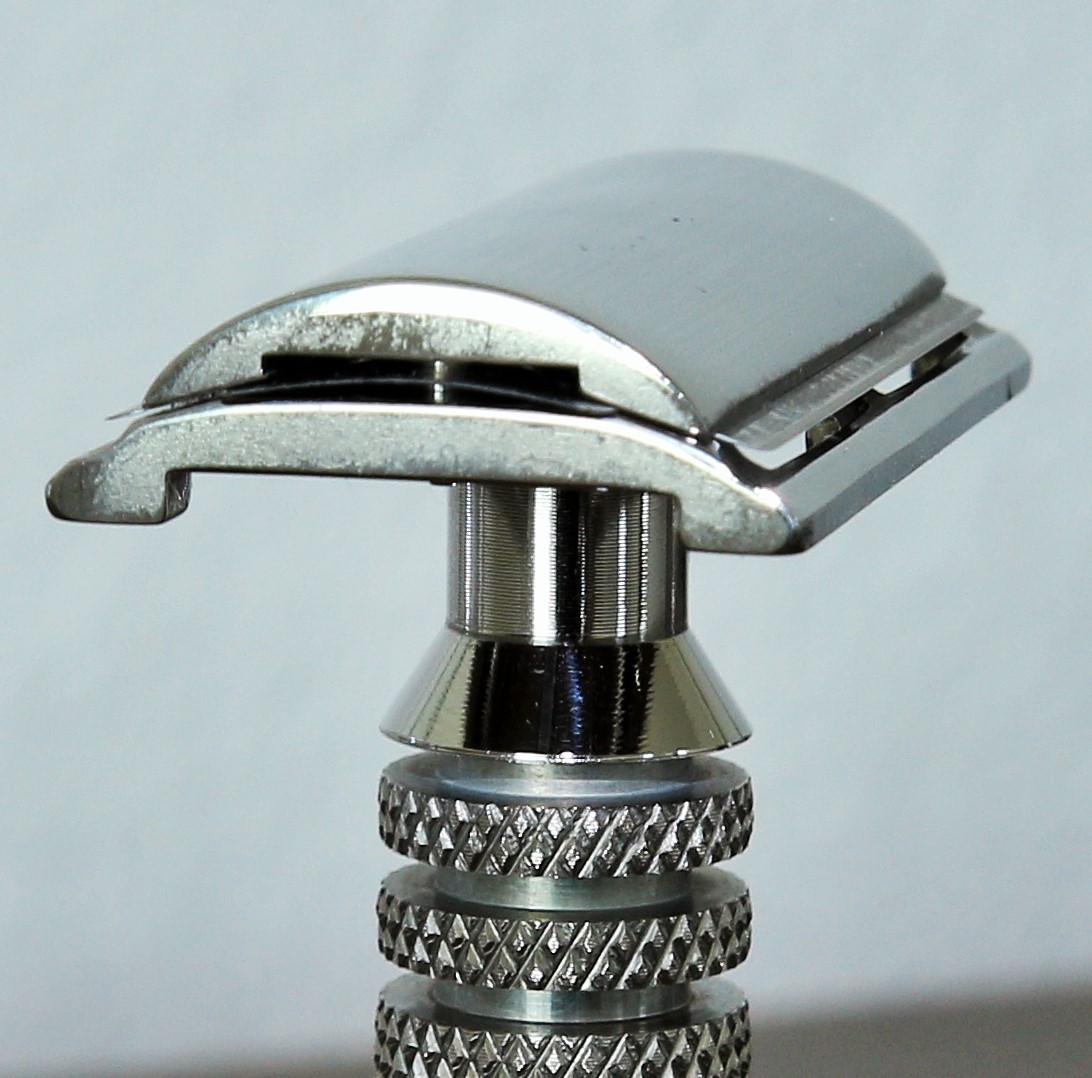 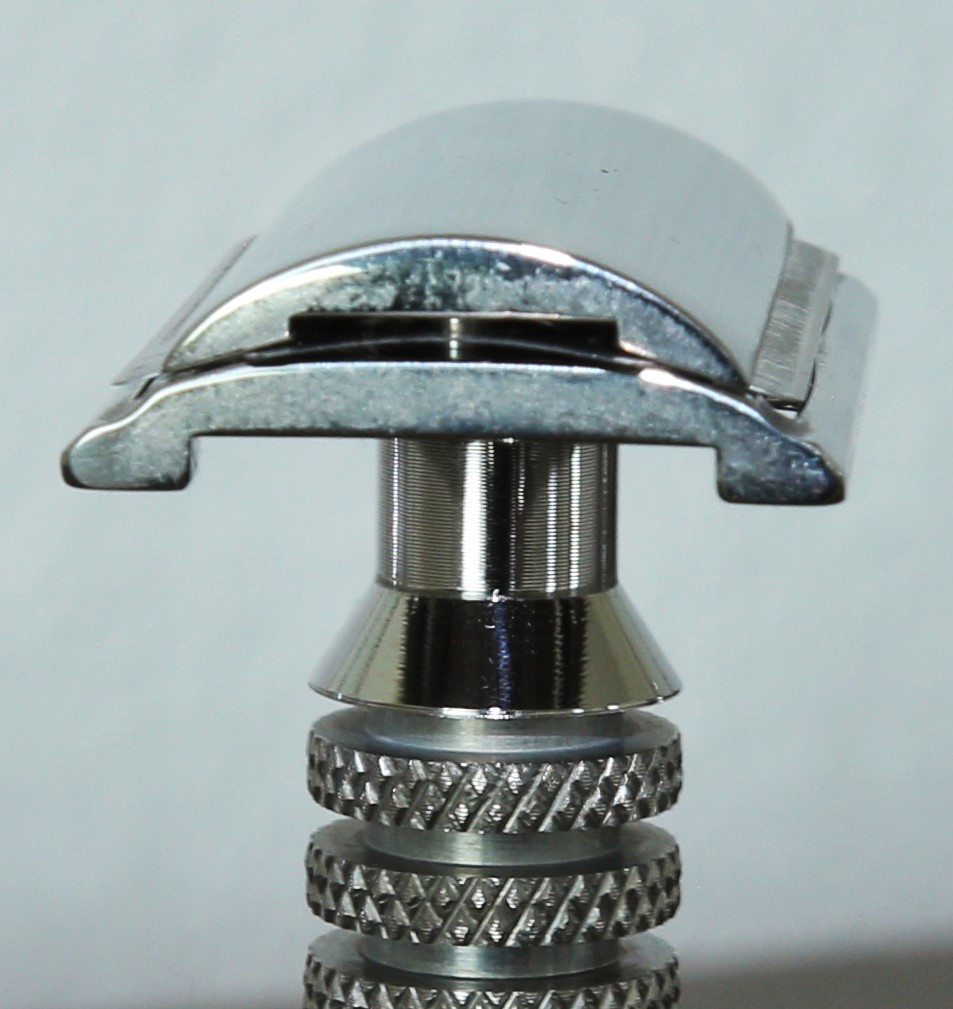 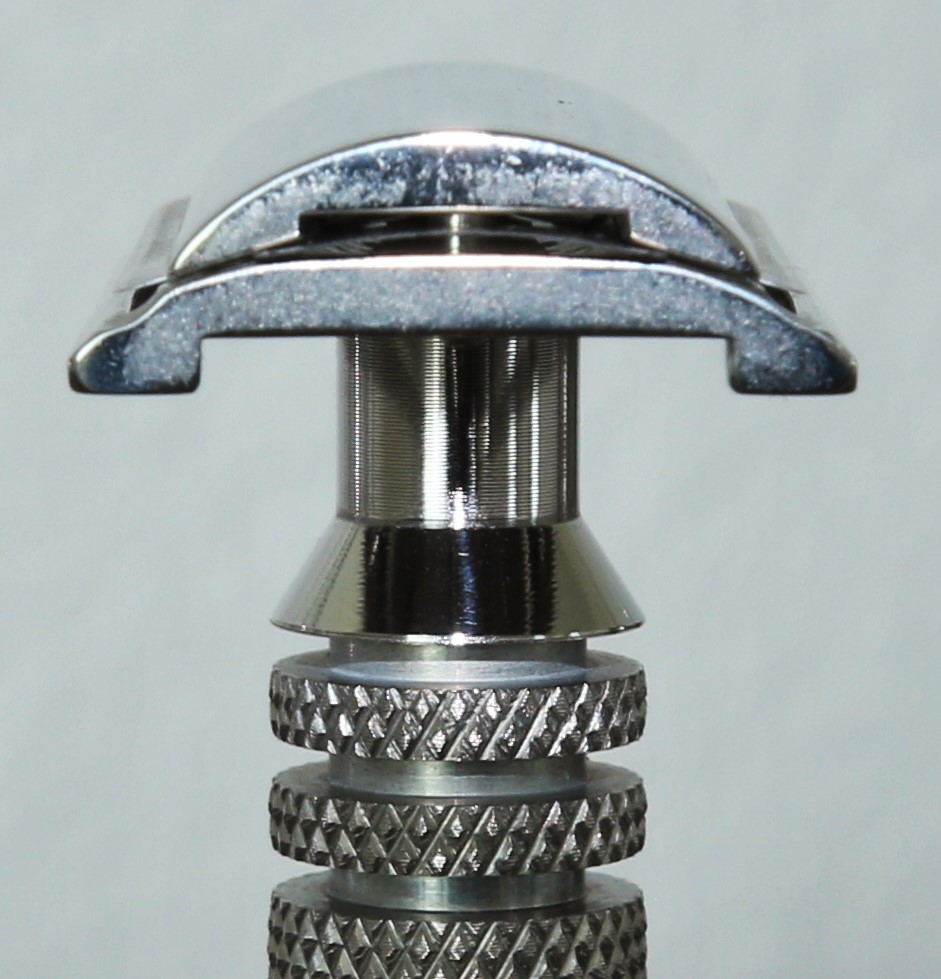 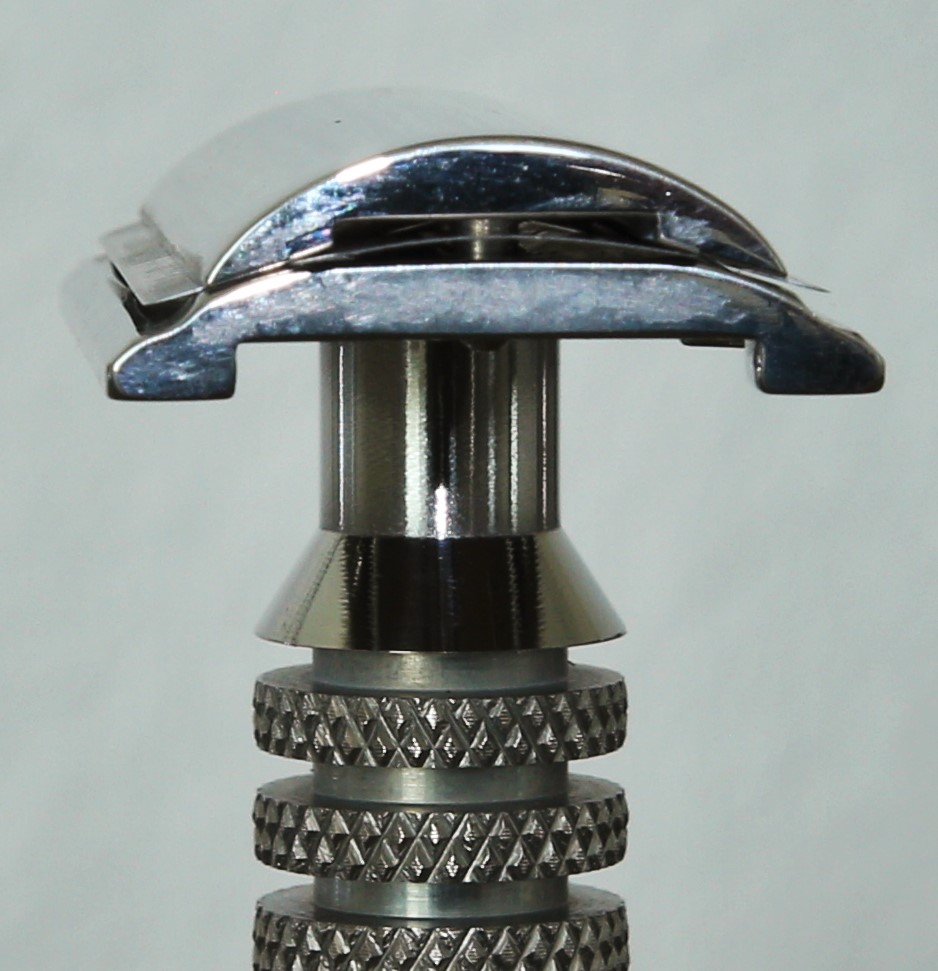 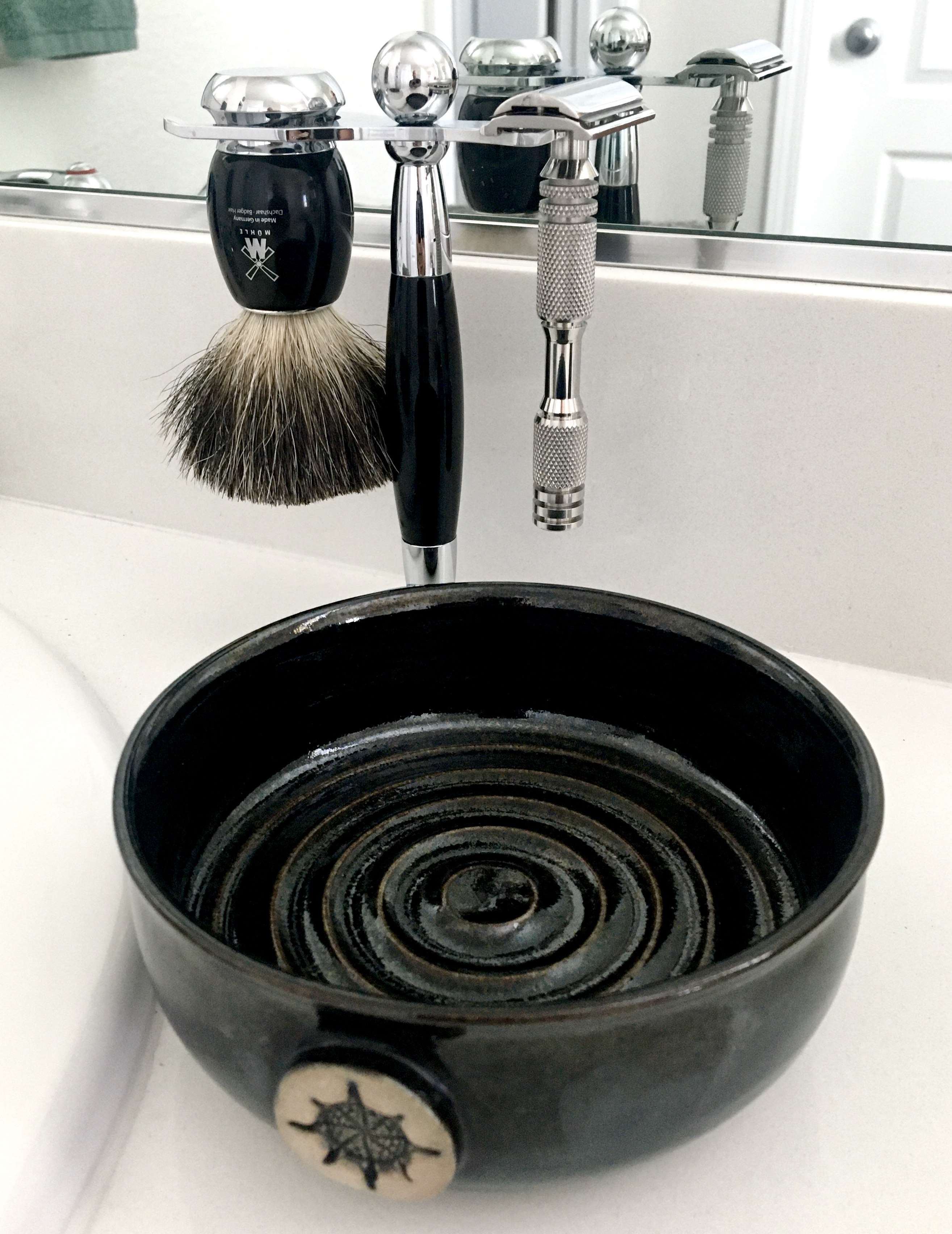 Contributor
Nice looking razor! Hope you have many years of enjoyable shaves with it.

Why all the CAPS?

A very good read. Congrats on the purchase of a fine, USA made razor. More importantly is the fact that it has been a worthwhile investment for your shave regimen. I recently just made a purchase of the Carbon Cx-Ti w/R2 handle as well and am waiting for it to be delivered within the next couple of days.

Contributor
Excellent review! It is interesting that many of the ‘mid aggressive’/blade forward shavers pair really well with Feather blades. They certainly are my preferred blade lately.

Excellent review @Raymondmillbrae !
A few months have passed since you wrote your review. Has this razor become your go-to razor?
Looking at the photos the blade exposure is generous. I´m wondering if its not too much for a daily driver.

Contributor
I get a great BBS shave with this razor. The problem is after 3-5 shaves in a row with it one area on my neck gets irritated and I need to switch to something else like the Ti .95 SB or Windsor Pro SB. I would not have thought that the Nacet was considered a milder blade than the Astra SP, but I'll try one the next time I decide to have a go with the Carbon.

Unfortunately, the Carbon - plate was too mild for me.

thank you, @MtView !
The Timeless bronze with the .78 open comb plate did the same thing to me. I had to switch to the solid bar bronze.
Some blade feel is pleasant but not too much.
You must log in or register to reply here.

My journey so far and razor rankings

S
I like big gaps and I cannot lie
2