Wow...what a long and full life with so many experiences!

He will be missed (by family, friends, Texas and a grateful Nation), and God bless him, keep him and may he Rest in Peace!

Mr. Overton, from one soldier to another...I salute you and my evening cigar and drink (Jameson), is in your honor.

"Richard Overton, the nation's oldest World War II veteran who was also believed to be the oldest living man in the U.S., died Thursday in Texas, a family member said. He was 112.

The Army veteran had been hospitalized with pneumonia but was released on Christmas Eve, said Shirley Overton, whose husband was Richard's cousin and his longtime caretaker.

"They had done all they could," she said.

He died Thursday evening at a rehab facility in Austin, Texas, she said.

Overton was born in Bastrop County, Texas and was inducted into the U.S. military on September 3, 1940 at Fort Sam Houston, Texas, CBS Austin affiliate KEYE reports. He served in the all-black 1887th Engineer Aviation Battalion.

Overton was in his 30s when he volunteered for the Army and was at Pearl Harbor just after the Japanese attack in 1941. Overton served in the South Pacific from 1940 through 1945, including stops in Hawaii, Guam, Palau and Iwo Jima during World War II. He left the Army in Oct. 1945, KEYE reports.

Overton worked at local furniture stores before taking a position with the Texas Department of the Treasury - now part of the Texas Comptroller of Public Accounts - in Austin.

He once said that one secret to his long life was smoking cigars and drinking whiskey, which he often was found doing on the porch of his Austin home.

His recent birthdays drew national attention and strangers would stop by his house to meet him. Even well into his 100s, he would drive widows in his neighborhood to church.

"With his quick wit and kind spirit he touched the lives of so many, and I am deeply honored to have known him," Texas Gov. Greg Abbott said in a statement Thursday, calling Overton "an American icon and Texas legend." 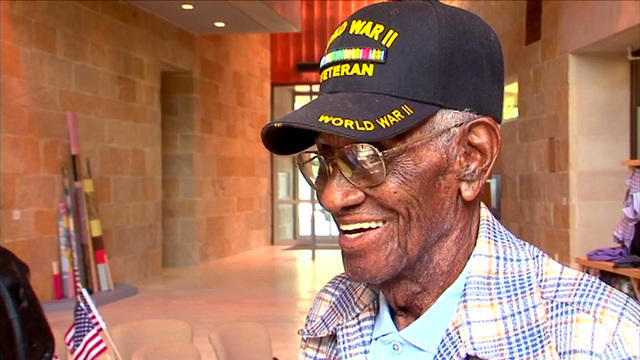 "I may give out but I never give up". Richard Overton

...a crisp salute to an old soldier and a true gentleman. RIP, Mr. Overton.

He has my respect and awe for his service. We have lost a hero.

Wow what a guy indeed RIP!

I remember seeing a piece on him a few years ears ago. Big cigar in his hand and whisky on the table near his chair. Seemed like a guy you hang out with. He had a heck of a run. RIP.

Moderator
What a life. The things that he witnessed in his lifetime the children of today would have no idea.
RIP Mr Overton.
You must log in or register to reply here.