Mitchell's Wool Fat Soap (MWF) - my perfectly matching AS... and yours!

Rather by accident, I found an aftershave which perfectly matches Mitchell's Wool Fat Soap: 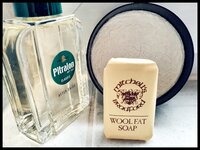 I didn't know about this aftershave until recently. The scent of the aftershave has very similar floral notes to the soap (when I opened the AS bottle the scent reminded my immediately on MWF's scent), but the aftershave extends the lovely scent of the soap with a classic & timeless, very tart and mentholated spicy scent of cedar. Soap and aftershave complement each other perfectly.

But beware: the aftershave can cause excessive masculinity....

MWF can, after all, be combined well with many aftershaves because its scent is rather unobtrusive - so my question is:

Which aftershave do you prefer in combination with MWF?

(I'll check back later, after having applied the AS I got the strong urge to chop down some trees with an axe....