I know there are a number of guys out there that value their accessories. You can tell by some of the special interest threads. I am really interested to see how everyone organizes their jewelry and accessories. Watch boxes are a fairly common item among collectors and many jewelry boxes have slotted sections that work well for rings and cuff links. What do you do for other items? And what about at home vs. travel?

I am mostly looking for some storage and organization solution for other items, tie bars, collar stays, lapel pins, and the like.

Please share some pictures of your storage solutions, or even your jewelry collections in storage to help share some ideas! I am sure there are some members here that have come up with far more elegant solutions than clusters of things in a box.

Contributor
I have no jewelry that comes off my body. Wedding ring stays on 24/7 and so does my necklace with my St. Michael pendant.

Moderator Emeritus
I don’t have any jewelry boxes, per se, but I have a couple of nice old carved wooden boxes, and I keep stuff in those loose. I have one for watches, and another for cuff links, rings, edc pocket knives, etc. 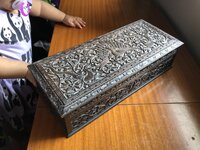 I have this Wolf watch winder and box. Works for me. I saved a ton buying on amazon though. Was less than half the price compared to the manufacturer website. 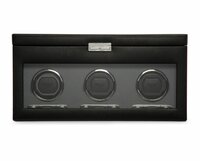 martym said:
I have no jewelry that comes off my body. Wedding ring stays on 24/7 and so does my necklace with my St. Michael pendant.
Click to expand...

If I ever lose my wedding ring, I will be heading to the ER (it’s tattooed on)

I don’t know if it’s a “jewelry” box but I keep a few necklaces and my wedding ring in it. The cigar box next to it holds some reserved shave soap. 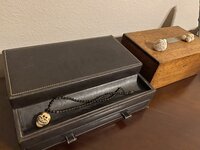 I finally got around to cleaning my study and while I was in there I took some photos of my jewelry box. I got it on eBay nearly 20 years ago and I haven’t been able to find another like it.

I drop it in a dresser caddy I've had since HS graduation. Failing that, in the sock drawer. My class ring in is my wife's jewelry box, though. Since everything else is cheap tie tacks and a tie chain, there's really nothing to store.

What you are actually looking for is called a men's valet. You can get jewelry inserts if the insides don't suit your needs.
D

I bought two of these for my cuff links and those I have "inherited" from my deceased father and father in law.
I am quite happy to date.