Hi folks,
One of the guys over at SMF was asking about these and I posted some pics, thought I would share the wealth here too. I recently got the Men-U "Premiere" synthetic brush, along with their cream, and expecting to be underwhelmed, was pleasantly surprised. The brush is far softer than boar bristle, but not quite as luxurious/soft as badger-it has a different feel. That said, it must be INCREDIBLY efficient, as the LOADS of lather I got from that tiny amount was without adding any cream or water after the first picture of a dollop on the brush. I am very pleased. As far as comparing it to the other brushes, its really apples and oranges.
Anyway, here's the pics....
as you can see, its travel friendly.... 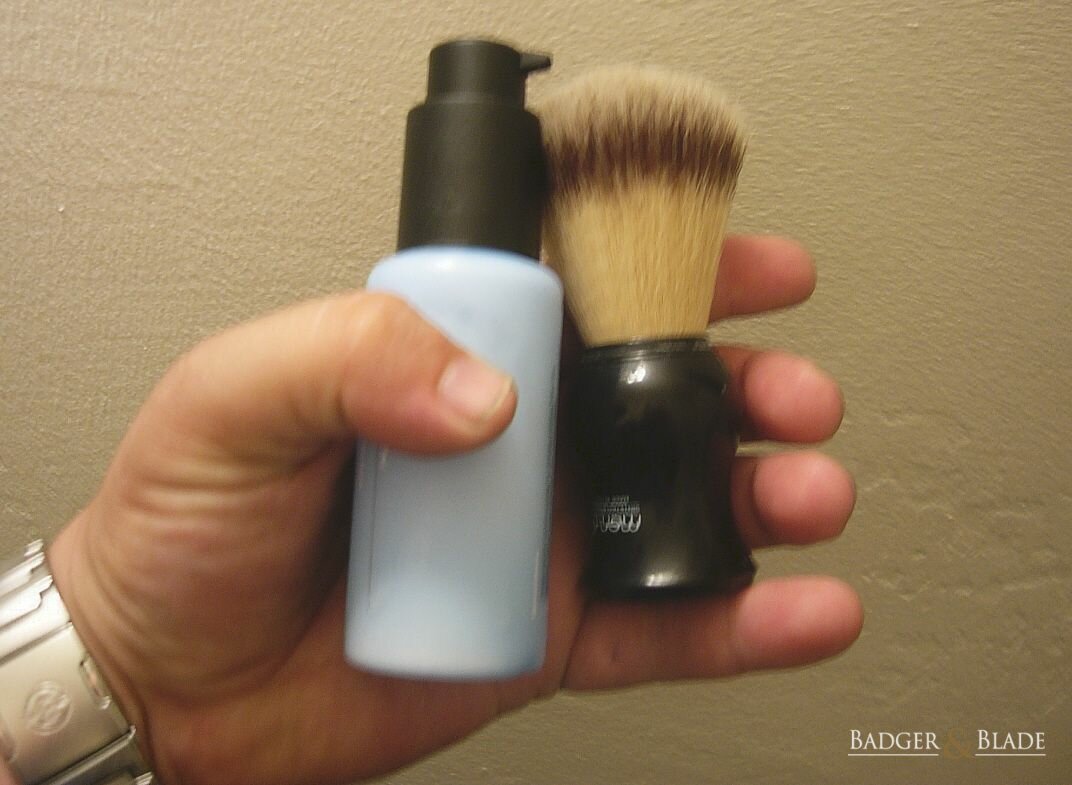 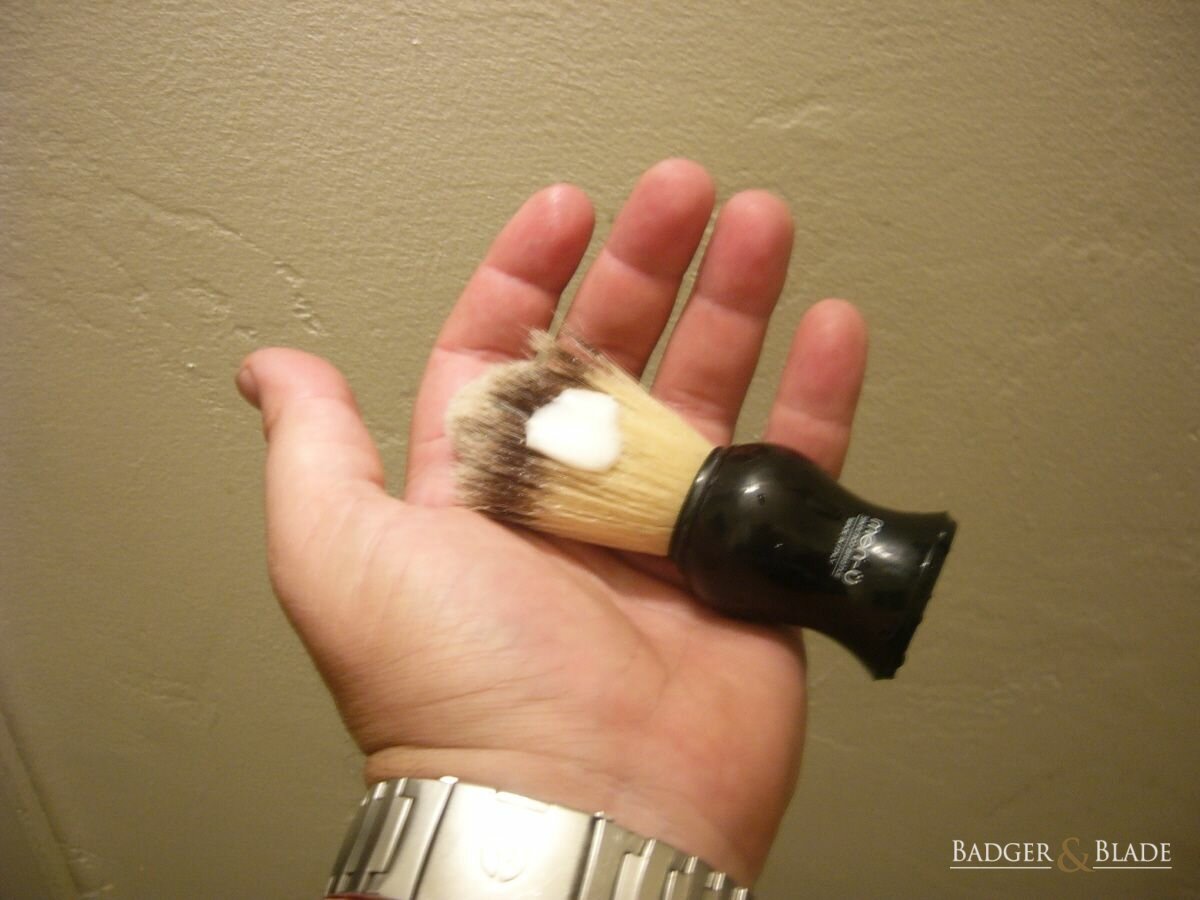 for a LOT of lather; and I experimented to see if it was the cream or the brush; its the brush-I get similar results with other creams..... 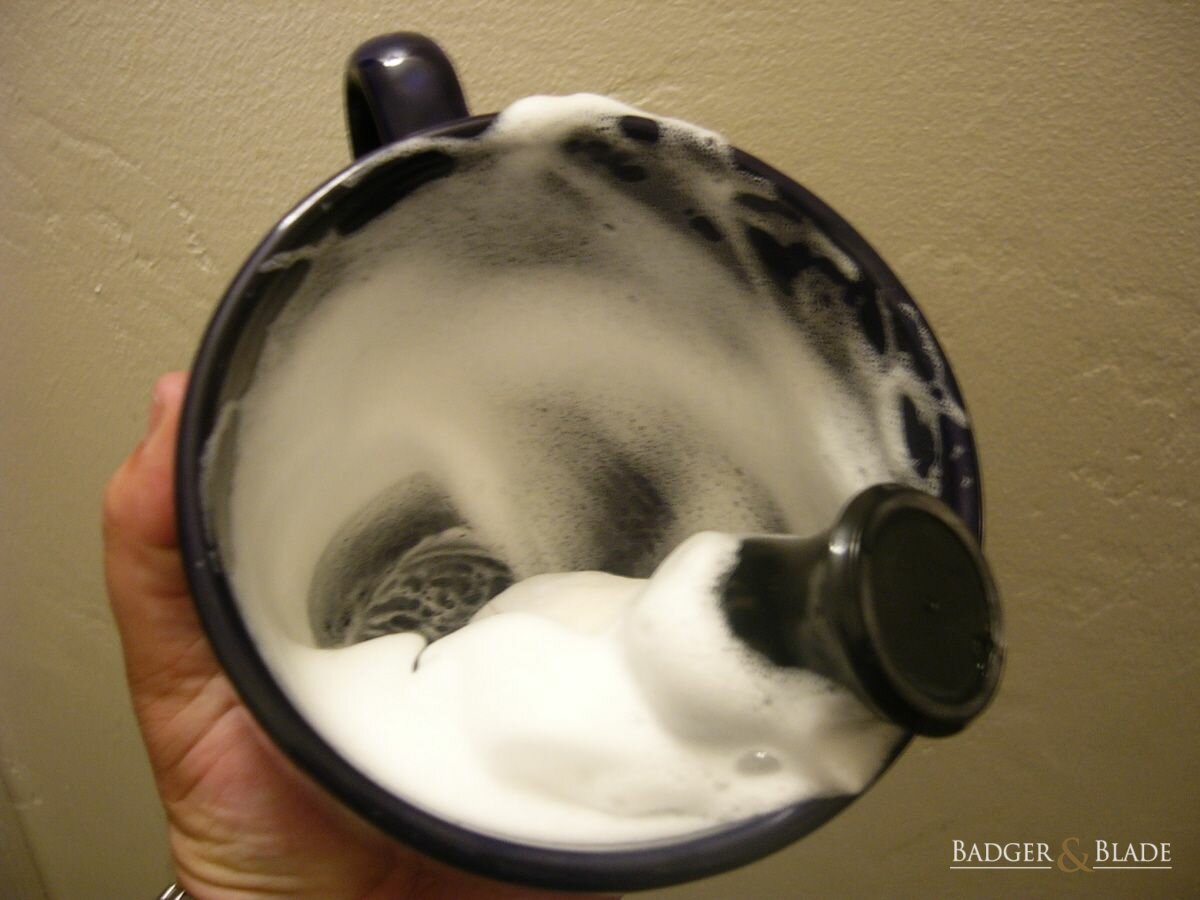 I like the brush; I already think this is going to be my go-to travel brush, and perhaps day-to-day as well. Its just too efficient. Now, if they could only make them a bit cheaper-after all no rare badgers had to be shaved for this one.....
John P.
Last edited by a moderator: Feb 7, 2017

John,
Cool pics.... now what kinda watch are ya wearin' though?!?! Neat looking clasp on that sucker!
J

Joel,
Thanks, I know they're a bit blurry. Lighting is crappy here, lucky I am moving this weekend. As for the watch-
only the FINEST Timex....(lol I didn't want to break out the fine "Casio" timepiece, and have you guys get jealous....)
Yeah got this one at the exchange for about 50 bucks. So far its done well, analog stopwatch, date window, alarm, and light.
One day I might venture into pricier watches, but right now just plain don't make enough.
John P.

Greetings John,
If Uncle wanted you to have one of those high $ timepieces, he would have had it tattooed to your wrist!

Just remember, takes a lickin' and keeps on tickin'.
J

Thanks for posting the pics. Hard to tell, but the lather looks a bit on the runny side. Is this due to the time involved in taking the pics, your photography skills or my bad eyesight?

Seriously, just wondering how it holds up through the shave!

Thanks for the review. I like the idea of a 'cheaper' synthetic brush as a travel brush. How much did it set you back?

Randy, the lather is not runny at all. I wasn't kidding about my crappy lighting; I have to wet the brush and put the cream on it, then run into the hallway and hold it under the "good" light to take a picture with -the other hand-and then return, do the next step, then run back out into the hall....same thing again. This site only lets me upload 3 pics at a time; I was able to get 5 pics of it over at SMF, one of the pics shows the brush, with the lather clearly thick enough and "peaking" from the side of the brush, without dropping....so blame my picture taking skills, lol.
Do you use a bowl or lather on your face? I usually lather on my face, and when I do so this makes a very thick consistency lather; like house paint before it has been thinned, or real whipped cream, perhaps. Not a lot of excess suds everywhere, it all sticks close to your face. Maybe more pics forthcoming.
Nick, They are going for about 50 bucks, normally, but if you log on to the wetshavers at MSN, Don has worked a decent discount, and is working on an even better one. Thats what I did; never pay full price if you can avoid it.....
To be honest, I like this brush BETTER than I thought I would; better than silvertip badger? depends. Efficiency? this thing beats any badger brush I have seen for its size, hands down-if ...I mean, I actually got this thing to make LATHER from L'Occitane cream....(which has consistently NOT lathered with any other brush I've thrown at it-perhaps they've reformulated but doubt it...)..... Luxury? Its nice, but I think the badger has a better "feel" on my face, than this brush, even if it takes a tad more water and cream. Which is best, a Rolls-Royce, or a Ferrari....they are apples and oranges. Same thing with this brush. Not quite like any other brush I've used.
I like mine just fine.
John P.
edit: Thought I would add that this brush produces similar performance with other creams, it isn't just the "Men-U" cream. I got loads of lather from C&E, Trumper, Taylor, Truefitt, and even some Activ I got from Joel a while back. So far this thing is a lathering MACHINE. Now if it was even cheaper.....and a little bit more luxurious....it would give silvertip a SERIOUS run...

As for the price, thanks for the heads up on the deal, I'll definitely stroll on over there and check it out.

Thanks Nick.
Might want to email Don personally, I think he's got an even BETTER deal in the works....might want to hold for a bit and save even more....If they get really cheap I'll be wanting a spare or two. I didn't like this brush when I first tried it, but I am really starting to love it now, as I think I could get lather from a brick.
John P.

Nice review, John. I like it when folks try out of the ordinary stuff.
M

This brush sounded like an ideal companion on my travels...small and effective. I tried it with a QED Shave stick and was rewarded with a great lather and a shave as good as I received using my super badger. The only thing I can complain about is the feel...it certainly does not give me that soft, comfortable feel that the badger generates. I am now waiting to see the dry time...an other important travel issue. Next I will try it with my Trumper's cream and I will report further.
J

Mitchll
I agree it doesn't feel quite as luxurious as super badger,(softer than boar, but you can still tell) but FWIW the good news is mine dries very quickly, much quicker than my badger brushes do. I also agree about the lather. This small brush is pretty impressive. I haven't found a cream yet that it doesn't lather at LEAST as good as my badger brushes do. It also seems to do it with less cream, does it seem that way to you as well? I may never run out of cream now.

JohnP said:
Mitchll
I agree it doesn't feel quite as luxurious as super badger,(softer than boar, but you can still tell) but FWIW the good news is mine dries very quickly, much quicker than my badger brushes do. I also agree about the lather. This small brush is pretty impressive. I haven't found a cream yet that it doesn't lather at LEAST as good as my badger brushes do. It also seems to do it with less cream, does it seem that way to you as well? I may never run out of cream now.

I've used this brush twice now with Trumper shaving cream and Taylor's. In each case it was verrrry impressive. If only it felt more luxurious. I used it again with the QED shave stick to consist results as previously.

All in all, a great brush that I will use more for traveling than at home as I like my luxury!

I just ordered one of these as a travelling companion. The "deal" that Don at Wetshavers worked out is:

You enter the discount code DJG during check out and the site does the rest. I'm ordering knowing full well that they have a 30 day full guarantee and they will take the brush back with no questions asked. Too good for me to pass up!

Thanks Howard, I saw that Howard ordered A Men U Brush, so I jumped in and ordered one too. I ordered mine in Black. What color did you order Howard? Howard I'm still looking for a buyer for the GIANT brush. If anyone has a XXXL size face email me. Have I got a deal for you!

The only color left is black. Supposedly, this brush has been extremely popular. I am excited to try it. I don't have any fantasies about it being superior to a fine quality silvertip - but taking it for what it is - I'm curious.

A lot of people "poo-poo'ed" the Feather razors, too... Contrary to popular belief, there CAN be notable improvements to our 'tried and true' shaving accessories!

JohnP said:
it must be INCREDIBLY efficient, as the LOADS of lather I got from that tiny amount was without adding any cream or water after the first picture of a dollop on the brush.
Click to expand...

That's not as a result of the brush. The cream is concentrated. Try it with a real brush and you'll see what I mean.

As you can guess, I tried and the brush and cream and was underwhelmed, without any prior expectations. I've never used a boar brush. My first one was a small Cutlery World pure badger which is old and still outperforms this brush by a mile. At this price (I think it sells for about $52), it should be compared to the badger. I assume it would still cost less.

I don'y know what I was expecting (the idea of a synthetic, animal sparing brush was attractive), but my first reaction was that the brush feels flimsy and like a toy. Just look at it in the pictures. It looks like I want to dust my coat with it. It didn't hold much water and did make plenty of lather, but only because the cream is concentrated. It didn't hold much more than one pass worth of lather, and it felt OK applying it but not as smooth and full as the badger.

After I finished with the brush and It was dry it did develope a little bit of a bloom. There it was sitting on the sink next to my SMF brush. I wanted to laugh, but I was the sucker that had bought it.

The cream was amazingly efficient and it was fine, but it didn't have the luxurious boquet or body of a Taylors. If I know these people it's probably about the same price.

So, I'm just wondering why anyone would want to buy this brush at that price. Save your money, or buy a small badger like mine. I noticed Classic shaving has a Vulfix #405 for $49.99.

Seeing that, I'm annoyed that I bought this brush (well, I got a discount and only paid $37, but the Vulfix is still a much better value).

I don't know if I'll use the brush again, because I have the SMF brush, a Kent BK8 and the badger. I think I'll check my closet to see if I have a jacket that needs dusting.

Why don't you return it, Joe? They offer a satisfaction guarantee.

If I'm not happy with the brush, that's exactly what I intend to do with it!

Joe,
The guarantee is pretty solid. Oddly enough though, after reading the experiences of others, I suspect it is an issue of technique...
You must log in or register to reply here.

Is there any way to improve the performance of a synthetic brush?
2