Not in this month due some items I mentioned in the April GRUME I would be picking up which have now been purchased, but just checking in to wish everyone good luck for the month ahead!

I will be back to GRUME in June but with baby number 2 due in a couple of weeks time I don't know if I will have time to log on and join!

Abz88 said:
Not in this month due some items I mentioned in the April GRUME I would be picking up which have now been purchased, but just checking in to wish everyone good luck for the month ahead!

I will be back to GRUME in June but with baby number 2 due in a couple of weeks time I don't know if I will have time to log on and join!
Click to expand...

Congrats on the baby. Hope you have time to enjoy them.

There's something about an Aqua Velva man.

Second shave of May GRUME, a lovely shave on a lovely spring day.

Being an admirer of the 3017 participants (and past running out of room), I am currently committing to one soap, (mostly), for 30 days. Today marks the 20th use of Soap Commander’s Endurance.

Endurance IMO, is a very good, clone of the original Old Spice. This commitment has enabled me to use a small repertoire of Old Spice-like aftershaves. Today, however, when I opened the on-deck AS cabinet, the dusty, AV Ice bottle called out to me, "pick me, pick me!"

An excellent shave this morning, but I think AV and I will only have an occasional one morning stand.

On the third day of GRUME...
Still in

Summary: I let the razor do the work-no pressure. On the first pass, I focused on one stroke and not repeating the same area. Second pass I used the "slide" technique. I have a slant razor but think the slide method works great with the Rockwell.
Shave was very enjoyable and smooth. WTG shaving does not produce a BBS face but for me (and my wife) it is sufficient.
GRUME-er-ing
Last edited: May 3, 2021

Today, I used a Friodur 72-V, 6/8ths near wedge (or is it quarter hollow?), that was on loan from a friend. I'm expecting mine to arrive in about a month and he was kind enough to let me try his and get an idea of what it feels like. The rest of the setup consisted of my standard brush and soap, namely the 59 and MWF. 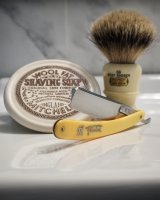 3th day of the GRUME ... and big fail after day three.
Couldn't resist the offer on a local forum and bought 3 soaps and 2 aftershaves for almost nothing, it was a steal I couldn't resist.
Next time, there's always next time (and just maybe I will break my record of 3)

My long nightmare is over.

For the past two weeks, all of my honing/sharpening time has been devoted to a razor that was being almost as stubborn as I was, a Titan made from 70HRC steel. I bought it because I wanted to know what is like to hone and shave with such a hard steel razor. Spoiler: honing it is a real pain.

I won't tell the whole story here; I've told it on this thread. What I will say is that I had to take it through my whole sharpening stone sequence twice, the second time with diamonds. This is the first shave with it after that second, more aggressive pass. 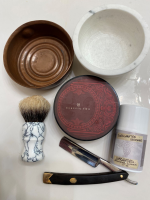 It was tons better than after the first pass, because I finally flattened the thing enough that I could reach the whole edge on the stones. And it took a very keen edge, an edge I actually enjoyed shaving with, and felt confident enough with to try some XTG moves (more like tacking a sailboat into the wind than actual horizontal strokes). That's a very good sign. It was comfortable this time, too. After the first shave, I thought I might shave with it every few months, for novelty. Then determination to make it actually function right welled up in me, and dominated my thoughts until I had reached completion. Now it just goes into the rotation.

It's a bear to sharpen, resisting the stones, and being very "stainless," in the sense of gliding on the stone instead of biting, and being very, very reluctant to relinquish a burr. But the slippery quality, at least, was a real benefit when shaving. It was as though I was using Teflon shave cream.

Hard to imagine a greater distance from "shave ready." I had to reshape the thing.

Also in the picture is the Tallow and Steel Classic II, whose scent I seem to like more every time I use it. Only a few shaves left. I guess it's fortunate that it was a limited run, and is no longer available.

Then there is the Declaration Grooming aftershave liniment, which knocked someone out of the April GRUME, and, when I was later felled by a brush I could not resist, I decided to grab some too. First time using it; didn't expect it to be so thick. Not sure how I feel about it yet. 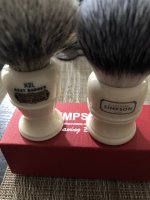 No shave today, but been doing test lathers with these bad boys. I agree with my friends complaints about the synthetic being tough to splay, but I can learn to get around that. I may end up regifting it and letting someone else give it a shot if it ends up spending more time on the shelf. The Colonel on the other hand is absolutely terrific. I would have never spent money on a Simpson brush but man, what a piece of work. Even for one of their less expensive models. I’ll have to introduce my Dad to this brand.

Oh my, so many Straight razor shavers!

May month is gilded with gorgeous straight razors.

I'm going to complete the testing of the loaner Lupo 95 for a week or two, as soon as I'm done with it I'll bring the Kamisori back.

Lupo 95 is a winner and definitely a good razor to have.
Since I have a Game Changer 84 Open Comb, and after spending some time in the GRUMEs, I can comfortably say that I don't need it.

Even though I can find a place for Lupo 95 in my rotation, it'll not be added in the 'desired items' list, atleast not when Game Changer is already present.

It actually feels good to be able to see clearly what is needed.

This sort of restraint/ control/ understanding was unimaginable for me a few months ago.

@Abz88
Hearty congratulations, best wishes for the (future) newest member of your family.

I shaved just now for only the second time in the past 10 days or thereabouts. That's unusual for me. I seldom go 2 days without shaving. So I wanted a real workhorse no nonsense shave. Gillette Silver Blue on about shave #8 or 9 in the red tip Super Speed; Arko stick rubbed into my beard, and a great lather worked up by my Simpsons Eagle G2 Pure badger brush. Mowed the beard right down in two passes and a few touch up strokes. Finished up with Booster Polar Ice, another no nonsense product. Still in restraint.

Perfect shave today after a day off from shaving with some of my favourite shaving products. FCS soap and AS is great stuff (idiotic names occasionally), Karve makes a great razor and Simpson Pure gets better with each use. Also, the Astra SS is not as popular as the Platinum, but it is a better blade IMO. 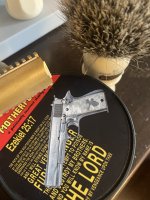 sandorfi said:
3th day of the GRUME ... and big fail after day three.
Couldn't resist the offer on a local forum and bought 3 soaps and 2 aftershaves for almost nothing, it was a steal I couldn't resist.
Next time, there's always next time (and just maybe I will break my record of 3)

Sorry to hear you fell prey to your SAD so early in the going. Feel free to post your feedback about the soaps and aftershaves when you use the purchases. Of course, you can re-commit and continue to play along from home, and we'll hope to see you next month.

Contributor
Still in. It's getting a lot cooler here tomorrow - may go with CF Lime and AS balm.

I think we're pretty informal. A lot of us do a roll call on each post from habit. It's not necessary unless @FoolishMortal decides to lay down the law and make it a rule

Hold on, let me check?

MtView said:
Still in. It's getting a lot cooler here tomorrow - may go with CF Lime and AS balm.

Responses are appreciated, but not mandatory.

Generally speaking, I look at the roll calls as serving two purposes: (1) an update to the list and (2) a subtle method of reminding people that they are participating in the GRUME. If someone has dropped out, this can trigger that member to post the fail; if someone is contemplating a purchase, this might nudge that person back onto the path of the righteous.

So, feel free to post that you're "still in", whether a roll call has happened or not, including just a simple SOTD post...or don't. Your call.