FoolishMortal said:
Finds like that are hard to pass up. That's why I don't go into antique stores anymore! Well, that...and most of them closed due to COVID.

Please feel free to play along from home, and we'll hope to see you next month. And listen to Owen Bawn!

What is a rolls call?

Still in over here, I don't think there will be a shave today, still feeling pretty good.

@Owen Bawn That Brad Sears looks really nice, I like the look of their "arley" style brushes. They are def in the save up, long term sorta things for me though.

It's great to be back to the Wolfman for an easy, long-lasting, BBS shave.

Owen Bawn said:
If you are going to do ARKO-SHARKO AUGUST, and you are in the July and August GRUMEs, we'll find a way to get a month's worth of Sharks to you. I promise.
Click to expand...

pdieten said:
I've been working on a partly used stick of Arko lately, and that is good soap that I have no problem with, but my relationship with Shark blades is such that there is no way in everloving h e double hockey sticks that I'm breaking GRUYERE just to buy some even if it does rhyme.

If we're really lucky I might be willing to load one of my excess of Silver Star blades, but that's as far as I go. Arko-Starko. Done.
Click to expand...

PM me your address and I will send you a few Shark Super Stainless blades so you can give them a try.

JWCowboy said:
If you are willing to extend that same courtesy to your pal here in WNC I'd be down for joining you. I have a couple of sticks of Arko (never used it before) but no Sharks and I'm in the 4 month sabbatical. A single tuck should do me for a months worth of shaves no problem. I typically shave for one week on a single blade
Click to expand...

PM me your address and I wlll send you some Shark Super Stainless blades. Had a fellow B&B'er do this for me with Astra Superior Platinum's.
L

not sharp, not smooth, sometimes tuggy. some nick on each pass and plenty of alum feedback.

not sharp, not smooth, sometimes tuggy. some nick on each pass and plenty of alum feedback.
Click to expand...

I never had good luck with those blades either.

wmadoty said:
PM me your address and I wlll send you some Shark Super Stainless blades. Had a fellow B&B'er do this for me with Astra Superior Platinum's.
Click to expand...

Thanks! PM coming your way. Only caveat is that I believe I have to reciprocate with some blades to you so as to make it an official trade as I don't think the restraint rules allow me to solicit gifts

AOS preshave oil, AOS lavender soap, Paladin brush, FOCS razor with a GSB on shave #6. Finished with alum block, Osage Rub and AOS aftershave gel. Was in a bit of a hurry so just shy of BBS but a good DFS.

Have a great week gentleman.
H

After I pressed the Eject button on the April GRUME, I went a little nuts with the purchases. I have a nice rationalization, though. It goes like this: I discovered, during my first restraint period ever, that I was not quite where I wanted to be with my shave gear. So I after my failure of restraint, I scrambled and made purchases to bring me up to ready, a place from which GRUME success is far more likely.

How do you like that one? Sounds farfetched, even to my ears, when I write it out like that, but I have a strong reason to believe it might actually be true: it's exactly how I've behaved with other hobbies. Once I have my hands on the stuff that has me in the place I want to be, further temptations become a weak, feeble thing, and I just don't buy much. Why shouldn't it happen with this hobby, too?

Exhibit A in "a little nuts with the purchases" is the brush I used for the first time today. 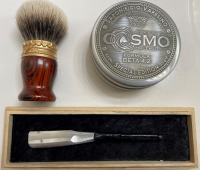 I had two SV shave soaps on hand, and wanted to try a couple of others, and it turns out SV sells brushes, and...

I was actually stunned by how great this brush is. It feels great in the hand. It seems to push all my buttons, the right skritch, the right backbone, and a readiness to produce a rich lather that had me actually laughing with joy for a moment. Maybe it's optimized for their soap. Love how it looks, too.

The SV Cosmo soap was part of the same order. I loved Desert Vetiver so much that I wanted to try some others. The Cosmo is not like anything I've ever smelled in a soap. It reminded me of the salty, minerally aroma you smell at a Florida beach that is absolutely littered with seashells. I like it a lot. I live in a desert, but it makes me feel as though I live in a beach house.

The razor has an interesting back story. I've told it in full on my intro thread, so I'll sketch it here. It's an Iwasaki Tamahagane that I bought on eBay. When it arrived, and I saw the back side looking like that, except less shiny, I thought I'd been ripped off, sold a pig in a poke in the form of a used-up razor. But I finally learned that such razors have plenty of life left, and can be honed, and I went at it. It's now my favorite razor. The heavy use it saw before it got to me might actually have helped with that, making the razor a touch less tall, and a bit more acute in angle. Maybe it also helped that I had to use about a zillion strokes to get a bevel, since there was so much metal touching the stone, so it got a ton of polishing. I've since learned how to open up more hollow, but on this one, it was pure repetition. It's maneuverable, super super sharp, and you can feel the hairs cut with the feedback through the handle. Using it feels like I am in total control, and I could make it do absolutely anything.

Owen Bawn said:
I quite literally have several thousand dollars worth of shaving brushes. Yes, I'm in 'restraint' in that I'm not purchasing anything new and I'm choosing not to use a brush that knocked me out of a GRUME, but believe me, there's nothing ascetic about my restraint. I'm using the best shaving brushes in the world, and I have plenty of them.

This past Feb-early April I decided only to use pure badger bushes for Lent. They aren't exactly a cilice or a flagellum or a hair shirt but a pure brush does inflict a wee modicum of discomfort on the user. But my 5 pure badgers are all either Rooneys or Simpsons; in other words, even when I practice asceticism I do so in luxury.

A tip of the hat, Owen, for being true to GRUME. Although I

Owen Bawn said:
Even after reading B&B for years, whenever I see the word "tuck" I think of a hemorrhoid treatment, not razor blades.
Click to expand...

There aren't too many other words that have multiple definitions that might be as life altering as Owen's aforementioned uses of the word "Tuck."

I'm in for Arko Thursday.
H

Contributor
I found a razor that does not tempt me in the least. 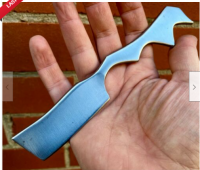 I've been pondering this picture all morning, trying to imagine shaving while holding onto that grip. Especially ATG on the neck. Completely failed.

I also enjoy how it's obvious that it's not sharp, or he wouldn't be able to hold it like that.

On The Tenth Day Of GRUME-ing...

Summary
I did it.
I finally paired the Feather razor with a Nacet blade. I have been having courtship difficulties with this razor. I am determined that the razor and I will have a good relationship. Every razor I combine with a Nacet works for me. The blade gets very good marks for comfort and efficiency. Anyway, the razor actually felt familiar and I knew when the blade was at the right angle. I am going to give "her" (the Feather) more opportunities to woo me with her charm. It was an excellent shave!
I AM IN FOR ARKO THURSDAY.

Contributor
Ambassador
I am out.

i have been waiting for a RazoRock Game Changer .84-P plate to come back into stock at Italian Barber for ages and I got the email notification last night. Ordered. And yet again... down in GRUME flames I go.

Don’t cry for me, fellas. I am good with this purchase and buying a $30 razor plate isn’t gonna open the floodgates. I won’t be calling Mark at Simpsons to commission a new custom brush.

See you in June.

SharpieB said:
I am out.

i have been waiting for a RazoRock Game Changer .84-P plate to come back into stock at Italian Barber for ages and I got the email notification last night. Ordered. And yet again... down in GRUME flames I go.

Don’t cry for me, fellas. I am good with this purchase and buying a $30 razor plate isn’t gonna open the floodgates. I won’t be calling Mark at Simpsons to commission a new custom brush.

It's a great razor. You're going to enjoy it.

redrako said:
It's a great razor. You're going to enjoy it.
Click to expand...

I have the Gamechanger razor but not the .84 SB plate. The .68 SB is too mild and the .84 Jaws is too aggressive. Hoping this one will be just right.