Long time a way wanted to say hi and such

I don't come on here much at all anymore because you guys make me want to spend money lol. No in all seriousness I just have been quite busy and up until a few days ago have been satisfied with my shaves. The other day I went to change my blade and then decided you know what I am tired of loading up my 3 piece (I forget the name of it from Italian barber) razor I want to use a TTO again. I just so happened to still have my micro touch one I started with I opted for an Astra blade instead of my normal Gillette blue silver that I use in my normal razor.

I enjoyed the shave as much as my normal setup but then it reminded me I still want a vintage Gillette. My dream Gillette is a 1983 D1 black beauty but anyway.

So this evening I was browsing fleabay for Gillette adjustables, sorted by ending soonest and there was a decent 59 Fatboy ending soon with a current bid of something like $11 or so so for kicks I threw a bid of $15 and won! I got it for $13.50 +6 for shipping I am so excited to be getting a Gillette adjustable I just had to come share the news.

It also got me to thinking why are most modern DE razors 3 piece instead of TTO? I mean it is 2017 shouldn't things be more technically advanced instead of the cooler ones being from the 80s and older mostly from the 40s, 50s and 60s? And why are there not many adjustable DE razors aside from those from the high end?

Welcome back. Glad you're back aboard. You might take a look at the Parker Variant which is a really nice adjustable razor that competes with the Merkur Progress (and beats it in some people's opinion).

Welcome back! As for TTOs, Adjustables and three piece...I much prefer the three piece myself. I like the fact that the blade is always stable and I know what to expect with every shave. I'm okay with TTO razors, but have on occasion forgotten to make sure the wings are tight before I put razor to skin. No major catastrophes, but I will take stability any day. As for Adjustable razors, I think they were just a sales gimmic at the time of the Gillette Adjustables.. I have not used mine for a while now, but once I picked a number I never changed it. YMMV of course.

IMHO the reason for the proliferation of 3 piece vs TTO is economics. The former is just easier to mass manufacture and sell at acceptable profit margins. Again, just my view. Best wishes.

Welcome back. My assumption is that it is simpler, and therefore cheaper, to manufacture a three piece rather than a TTO. Just a guess, though. Enjoy your shaves. And congrats on your new purchase. Keep your eyes open and you'll find your desired Gillette.

Congrats on the Fatboy score. That's a super deal.

Thanks I am super excited about it the new razor. For me I like mechanical things (I am an automotive technician by trade) so I find the TTO more interesting than screwing a handle into two pieces of metal I have never found the TTO I have to be unsecure at all. I guess the good thing is I like old things too so I plan to buy a few old Gillettes

Welcome back to that same old place that you laughed about, @Djwyman!

In response to your questions:

Djwyman said:
I mean it is 2017 shouldn't things be more technically advanced instead of the cooler ones being from the 80s and older mostly from the 40s, 50s and 60s?
Click to expand...

The difference likely lies in the fact that DE razors were a mass-market product in mid-20th century US/UK/Europe and are a niche-market product today. There are today many fewer unit sales over which to spread the fixed engineering and production costs of a TTO or other mechanically-complex (in comparison to a three-piece) razor and it's not clear that our niche market would reward the effort with a premium large enough to make the effort worthwhile. (It would be interesting to see how large was the premium TTOs and other more mechanically-complex razors commanded over three-piece razors in the mass, mid-20th century market.)

Djwyman said:
And why are there not many adjustable DE razors aside from those from the high end?
Click to expand...

As DEs have become a niche-market product in US/UK/Europe, the typical DE user looks a lot like the shaving enthusiasts who populate sites like B&B. The tastes and preferences of shaving enthusiasts tend to run retro, rather than techno. I recall there being a lot of anti-adjustable sentiment in another online shaving community I used to frequent. (The thought was that an adjustable razor is the enemy of developing and maintaining good technique with respect to blade angle.) Those retro tendencies make adjustable-razor enthusiasts a niche within what is already a niche market. Producing an adjustable for these folks makes sense only if the premium they're willing to pay for an adjustable is high. Thus, adjustables will tend to be high-end products.

Welcome back! For me 3-piece is the most stable set-up. YMMV of course.

Contributor
Contributor
Welcome back home. Pull up a stump and set a spell.

There are quite a few TTO type razors out there that are all basically Gillette clones. I have the Feather Popular, the Weishi 9306 and the Viking Chieftain (a rebranded Baili) and they are all well built and inexpensive. But my black handled Gillette Super Speed still gets the most face-time.

Hello there, nice to meet you.

Sent from my SAMSUNG-SM-G900A using Tapatalk

so I got my less than $20 fat boy in the mail today and I must say I am over the moon excited about this thing it is in GREAT shape. I was actually not sure what I was getting until it showed up as the description was of an E3 1959 but the pictures were of a slim but either way I figured at $13.50 plus $6 for handling it is not a bad deal. what I got in the mail was what the description saind and is infact an E3 1959. VINTAGE~GILLETTE 1959 DOUBLE EDGE ADJUSTABLE SAFETY RAZOR E3 | eBay 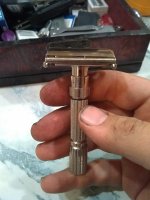 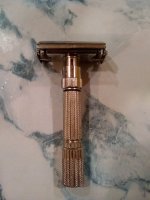 actually after looking at the pictures I see something is bent on the head. Does anyone know how to straighten that? or is it done for?

Further update I was able to correct the crookedness of the head by bending it slightly with my hand. Then I gave it an alcohol bath then I took me a shower and then tested that puppy out...I set it to level 5 with a Gillette silver blue (my favorite blade) let it rip. Oh my! that is one of the best shaves ever. I don't know if it was dumb luck, my skills have gotten that good, or it's just that good of a razor but in any case I am happy. I still plan to try other settings but so far I know 5 is pretty awesome.

Moderator Emeritus
When the vast majority of the world's men shaved with DE razors, it would have been easy for Gillette and other manufacturers to believe that they would have that playground to themselves for all time. Now, with only a small percentage of men using a DE regularly, anyone wishing to make money in that area is likely better served by producing simple, 3-piece designs and recouping development costs ASAP.

Congrats on the score- and it is only a score once you have repaired the obvious damage.

Welcome back. Looks like you got a Fatboy in working order so great result.

So today I went to the store and bought some scrubbing bubbles (well the generic version anyway) some 3-1 oil and came home and cleaned this thing up. It is all lined up, cleaned, polished with some tooth paste and threw a little oil down the tube and on the threads to kill the squeak it had. I think it turned out good enough for me. While I was cleaning it I went ahead and cleaned my other 2.5 and they look good to 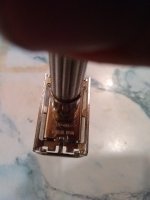 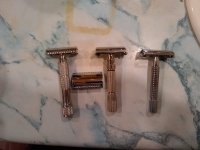 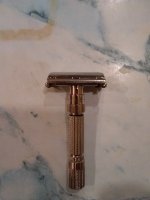 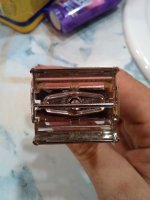 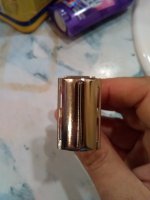 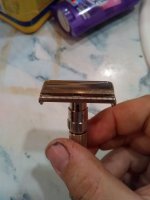 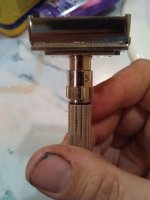 Recommendations for a more aggressive razor.
2

Today i was generous.