Long Break, Getting Back On Track

I haven’t been around much since last summer. As I have been wont to do around here these past 15 years, I occasionally take a several month break from B&B and then reappear as though I never left. Well this time I have lifelong dream come true news.

Mrs. OldSaw and I have had a summer home in northern Wisconsin for many years. Most of that time it was a fairly old and rundown mobile home on a back road near a lake that we had access to through my brother. We longed to have our own lakefront property but it was always just out of reach or needed so much work that it just wasn’t worth it.

A few years ago we were at the point of removing the mobile home and building on that lot and found several suitable plans. During that time we also found two properties on a neighboring lake and put in offers. The seller got a little persnickety when we asked for a septic inspection. With renewed hope of finding an affordable lake home we began our search again. We met with roadblocks and missed opportunities. Finally, in the middle of negotiations with the difficult seller, I said, “Let me try “Dan” one more time.

Dan had a ramshackle old cabin on the lake just three doors down from my brother and across the road from my parent’s. Besides being closer to my family (brother, parents, an aunt, an uncle, brother-in-law, and cousin) it was a much nicer lake than the other one. I had first planted the seeds to buy Dan’s place over 30 years ago. I’d occasionally remind him that I was still interested when I’d see him on his annual visit. Of course, I wasn’t the only one interested. He had neighbors on either side who wanted pieces of his three parcel tiny estate (one small lake lot with tiny cabin and two vacant wooded lots across the road, which allowed for a conventional septic system). Did I mention that one of those lots connected to our original mobile home lot? 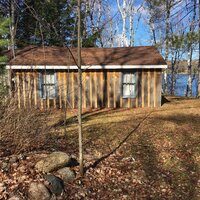 Anyway, Dan still has a landline and in order to reach him you have to call and leave a message on his answering machine and if he feels like returning your call he will, eventually. So I called him and explained the situation and that we were still interested in his place, but we had to make a decision soon because we were in negotiations and of course if that fell through and we built on our backlot, then we wouldn’t be able to afford his place Later.

As good fortune would have it, when Dan called back a week later he said, “Yeah, I’ve been thinking about selling it, but I have to run it by my grandson first.” Oh joy of joy!!! There was a glimmer of hope. This was the first time in over thirty years that he ever said he might sell. But that grandson in the wings could snap it up and we would be out of luck. So now we play the waiting game and while that was going on the difficult seller on the other lake went completely goofy with weird stipulations about boat launch easements, a shared well, and still no dice on the septic inspection.

So finally Dan called me and said his grandson is no longer interested and he would sell to me. Then out of the blue one of the neighbors starts asking my dad what’s going on with Dan. When will he be here? What are his plans? So now I’m really getting worried and tried to pin down a deal without tipping off the neighbors. Dan agreed on a ballpark price but said it was too late in the season to move out and wanted to wait until spring. It was a long winter and at the first sign of spring I left him another message and we finally met at the property and my wife was able to see inside for the first time.

It had some nice features in the living room. 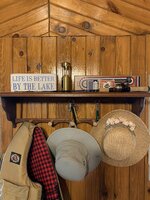 But the bathroom was hideous and the kitchen wasn’t much better. 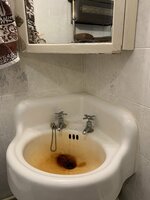 After looking it over, Mrs. OldSaw agreed that we should buy it and then the other shoe fell... he had a granddaughter who had to sign off but we at least had a fair and agreeable price locked in that wasn’t too far off from our original ballpark figure. So again we waited on needles and pins. After a week or two Dan called me and said it’s yours. Of course, there was all the paperwork and legalities to take care of but I remember Dan saying, “Don’t worry, Dennis. It’s yours. This is really happening. I’m a man of my word.”

Finally, after nearly a year we had our little lake cottage. It was small and cramped and built on a damp cement slab with little opportunity for improvement, but it was ours AND it was on the lake, yay. Soon we realized that things were a bit too crowded when our three children and their spouses visited. So we discussed remodeling with a builder friend and a basement with a concrete friend. They both advised us to tear it down and build new from scratch with a walkout basement. Of course, this wasn’t what I wanted to hear. But after much consideration we sold our house in the city in one weekend last summer and hired a builder.

This is what he built, as seen from the lake. 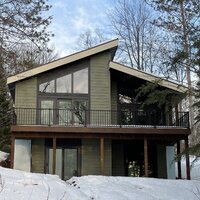 And from the road. 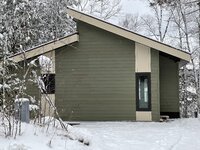 And from the living room. 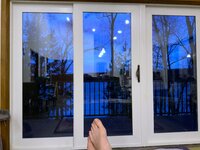 This all took considerable time and with health restrictions, etc. we couldn’t just move in to my aged parent’s basement across the road during the build. So we rented my brother-in-law’s cottage just a few doors down from my parent’s. Thinking that we would be moved in to the new house by Christmas I figured his little three season place would suffice and we could stay on top of the building project.

Wow! It’s getting late. I’m going to have to continue this in additional posts. But suffice it to say, my shave gear has been resurrected from the depths of storage and new pots and pans are on order for the induction cooktop. More to come. Thanks for reading.

Contributor
Congratulations!!
I really don’t know what else to say.

Congratulations and enjoy your new home.

martym said:
Congratulations!!
I really don’t know what else to say.
Click to expand...

First, that written narrative outlining the lead up to your final acquisition of your dream property reads like a plot summary for a "Perry Mason" episode, OldSaw! The only thing missing was the murder!

Second, congratulations! It's really nice when "things" work out for you in life. This comes from one "Sconnie" boy to another. My sister and brother in law have their retirement cabin up in the Wisconsin northwoods, too.

Thanks for sharing it with us.
M

I hope there are no lake monsters which crawl out of the lake at night. 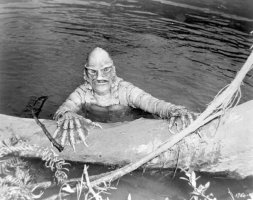 I expect you'll soon be regaling us with tales of shaving with lake water. I, for one, am looking forward to them!

From a fellow Wisconsinite, enjoy your place up nort!

Jbird45 said:
From a fellow Wisconsinite, enjoy your place up nort!

Ain’t up nort until you’re north of 64. At least that’s what I was always told. Some people say north of 8. Well, I’m only a few short miles from highway 8, so it’s north enough for me.

But really, once you get out of the cities there’s not hardly a bad place in Wisconsin. I just drove from Iowa (Dubuque/Hazel Green crossing) to Crandon, WI. There’s some pretty awesome scenery in Iowa county, Dodgeville area. Drove past Taliesin and The House on the Rock. I love Wisconsin and it would be even better if Lake Michigan wrapped underneath and over Illinois.

Fantastic story! Congrats beautiful home.
You almost lost me with that sink.

OldSaw said:
Ain’t up nort until you’re north of 64. At least that’s what I was always told. Some people say north of 8. Well, I’m only a few short miles from highway 8, so it’s north enough for me.

But really, once you get out of the cities there’s not hardly a bad place in Wisconsin. I just drove from Iowa (Dubuque/Hazel Green crossing) to Crandon, WI. There’s some pretty awesome scenery in Iowa county, Dodgeville area. Drove past Taliesin and The House on the Rock. I love Wisconsin and it would be even better if Lake Michigan wrapped underneath and over Illinois.
Click to expand...

Crandon! That's where my family's land is. Kind of the same situation as yours where all my aunts, uncles and cousins are all within walking distance of each other. My grandpa originally bought 20 acres up there in the 60's and most of it is still in the family today.

I agree, it doesn't feel like up nort until north of 64, and north of 8 is pretty too. I like to think of Crandon as almost perfect, far enough north of Lakewood area and far enough south of three lakes/eagle river, so you avoid some of the tourist traffic.

LOL! The joys of living on a lake in the Great Lakes Region: HARD water!

FarmerTan said:
LOL! The joys of living on a lake in the Great Lakes Region: HARD water!
Click to expand...

Just Gave My New Stuff Away

My experience with two replating companies.

Screwed up that recipe