I had an E-Shave Lime and Vetiver cream I gave to my son (I don't really care for creams), but I loved the lime scent first thing in the morning. I try to keep my soap stock down to just a few, so I don't like to buy just to try large tubs so I've looked at Stirling, Seaforth (offer samples) and Col Conk (not sure as someone made the "smells like a Jolly Rancher candy" comment). Before I do, I'd like to hear from others regarding a nice strong, natural smelling Lime soap with good lathering performance (body but more importantly slickness/protective) choice--does not need to have a matching aftershave.

My son asked me if I knew of a good Bay Rum soap/or cream and aftershave--I admit I'm not a bay rum person (maybe I am, I just don't know it yet), so I'm hoping that others may be able to provide suggestions. He favors a strong scented soap (also lathering performance/slickness), but doesn't care for Bay Rum that's too "Clove forward" scent wise, or one that's a challenge to lather (heard that Ogalla Bay Rum might be one of them). The aftershave and soap don't need to be from the same company/brand, just pair well. While I'd buy his first bay rum soap/aftershave, any future purchases would be on him, so not looking for anything over $25 for either the soap or aftershave as he doesn't have the disposable income available.

Any and all suggestions are appreciated from the fine members of B&B!

Contributor
Shannon's Soaps 25th St Lime, a fantastic natural lime scent that does have a matching aftershave also it has great performance and its quite reasonably priced.

For bay rum I love Barrister and Mann soap but it might be a bit too clove forward, Bootlegger's Bay Rum or Captain's Choice are two of my favorite aftershaves. You would have to mix your own bootlegger's.

Contributor
Vendor
Ethos Lime is a great lime scented soap, and a great soap as well - performs very nice (and it is with GD and DG soaps in my favorite list).

Chiseled Face Bay Rum has a distinct bergamot/lime and ginger note that make is much brighter and than most bay rums. It's a favorite, very citrusy and bright! Here are their notes on it:
This is a tropical bay rum - quite different than most bay rums on the market today - this one actually has a bit of a rum kick to it and is spiced up with ginger and lime to give it a lighter more tropical feel.

For a good performing soap and aftershave combo, Captain's Choice Bay Rum or their Lime have been favorites for years. If you want an eye-opener aftershave, try their Cat O'Nine Tails. It's a must try-think Home Alone. I keep hoping for a Co9T soap. Ogallala probably fits your "clove forward" scent. I love their Bay Rum, and Bay Rum, Limes and Peppercorn aftershaves, however, Ogallala and Conk shave soaps never really performed well for me. 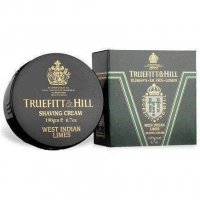 Lime is one of my favorite scents for soap and this one does not disappoint.

Contributor
Anne Bonny from Dr Jon’s. A really great when it comes to scent and performance

Chris7495 said:
View attachment 1317616
Lime is one of my favorite scents for soap and this one does not disappoint.
Click to expand...

Do you know how close this is to the Crabtree and Evelyn West Indian Limes? I've been hoping to find something comparable.

I'm kind of new to Bayrum Aftershaves and soaps. PAA atomic age Bayrum is sure talked about a lot and has no clove(I like some clove in my Bayrum). Colonel Conk Bayrum soap is OK IMO with good protection, I really enjoy Ogallala Bayrum & Sandalwood aftershave but it has some clove and the Ogallala Bayrum soaps are very good in slickness but the foam is a little different than other soaps.
PAA Atomic age Bayrum aftershave and Atomic age CK6 Bayrum soaps are the ones I almost pulled the trigger on but they are twice as much money as Ogallala products & are they better?
Citrus scents if natural tend to flee quickly and are usually top notes on most fragrances.
These are the ingredients in the Ogallala Bayrum soap I used this morning for my shave. 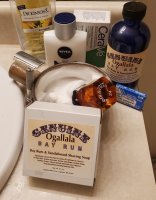 Contributor
Captain's Choice makes an excellent version of each, but my favorite lime is the limeade scented Razorock What The Puck.
J

Having recently tried a sample, I will echo Beefdrippings suggestion of Dr. Jon's Anne Bonny for performance and scent. I will add to it that Anne Bonny has no added clove to it, or other spices. You can smell the faint clove-like characteristic of Bay Rum itself, however. Also, (courtesy of WCS recent sale) I wound up trying the ASB of English Phoenix & Beau's Imperial Rum. It has some other spice, but also lists no clove. I can even say that these two work well together, FWIW, in my experience.

I like Nomad soap with Captains Choice lime aftershave....great combo.

njpaddy said:
For a good performing soap and aftershave combo, Captain's Choice Bay Rum or their Lime have been favorites for years. If you want an eye-opener aftershave, try their Cat O'Nine Tails. It's a must try-think Home Alone. I keep hoping for a Co9T soap.
Click to expand...

I do not think I could expand upon that which was so perfectly stated.

BrianP said:
Do you know how close this is to the Crabtree and Evelyn West Indian Limes? I've been hoping to find something comparable.
Click to expand...

Sorry I have not tried the Crabtree and Evelyn lime. Hope you find something comparable.

Chris7495 said:
Sorry I have not tried the Crabtree and Evelyn lime. Hope you find something comparable.
Click to expand...

The search continues! These recommendation threads are helpful.
M

My favorite Bay Rum is the offering from Rod at Stirling. It still amazes me to this day that so many people confuse the nutmeg in it for clove!! It's one Stirling soap I will never be without... 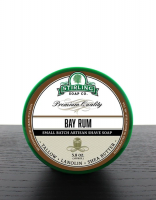 and they have Lime too... 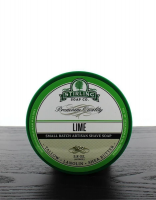 Contributor
Your post seems to me to be a request for suggestions for a Lime soap and a Bay Rum soap.

For a slick Lime soap I would consider:
Taylor of Old Bond Street Lime Zest - Not a candied lime scent, but more of a natural lime mixed with a slightly woody undertone. TOBS has always met my slickness and protection criteria which has recently gone up.
Mike's Natural Soaps Lime - Although I don't have this particular Mike's soap, it's been getting good reviews from B&B members. I have other Mike's soaps and I can say that Mike's Natural soaps have excellent slickness and provide good protection during the shave...in my opinion, definitely above average slickness and protection for this soap.

Mike's Natural Soaps Bay Rum - Might as well parrot the above for their Bay Rum.
Phoenix Artisan Accoutrements Atomic Age Bay Rum CK-6 Formula - Dynamite scent, extra slickness! They have several takes on Bay Rum and if I'm not mistaken all come in their CK-6 Formula...which is slicker than their regular CK formula which isn't bad either quite honestly.
Chiseled Face Groomatorium Bay Rum - Mentioned above by several members. It has tallow and other slickening agents. And as mentioned above, great take on Bay Rum
Wet Shaving Products Bay Rum Formula T - Tallow and shea butter make this Bay Rum with a lime kick...very slick.
Zingari Man The Nomad - Also mentioned above, Zingari Man soaps are good in the slickness and protection department. Their Bay Rum and Mystic Waters Bay Rum have a very similar scent.
Mystic Waters Bay Rum - Tallow with other slickening agents put this soap into the above average slickness category. Nice scent...see Zingari Man The Nomad above...very similar scent.
Captain's Choice Bay Rum - Also mentioned above...I always seem to have a good experience with Captain's Choice soaps and creams. In their Bay Rum scent, I have both the soap and the cream and both provide above average slickness for me. An extremely true, no-nonsense Bay Rum scent.
The Sudsy Soapery Bay & Citrus - Tallow and triple butter shave soap...slip sliding away in Bay Rum!
Phoenix and Beau Imperial Rum - Tallow with additional slickeners make this Bay Rum, Spice and Lime soap a good bet for protection and glide.
Barrister and Mann Bay Rum - One of my favorite Bay Rums...a thirsty soap, but definitely above average slickness and glide.
You must log in or register to reply here.