Mmmm, mmmm, good...love me some good Cracklins, but where in South West Louisiana (or anywhere in the Bayou State or the South for that matter), can you get'em

So, the question is...where do you go to get your cracklin

The Cajun [and Creole] boucherie dates back centuries, a communal hog butchering where careful attempts were made to use every inch of the animal to adequately feed the coterie. Usually held in cold weather months, the boucherie produced items for backbone stew, sausage such as andouille and boudin, ham hocks, bacon and pork roasts, among other pork products.

Even the skin of the pig was used. Called grattons in French, or by the more popular name of crackling or cracklin’, South Louisiana residents drop the pig skin with fat and sometimes meat attached into vats of hog lard. The frying time varies per cook but most know cracklings are done when they pop and form “eyes” and float to the surface. Some cooks pull the cracklings from the fat and allow them to cool before deep-frying them a second time at a higher temperature. Once doused with seasoning, the final product becomes a crispy, tasty snack.

Cracklings are cooked throughout the South, but the fatty pork nibble is especially popular in Acadiana. Fresh cracklings under heated lamps or those packaged to go can be found in both meat markets and grocery stores and at your local convenience shops or gas stations.

“Crackling gets under your skin,” wrote George Graham in his cookbook Acadiana Table: Cajun and Creole Home Cooking from the Heart of Louisiana. “It burrows deep into your psyche and finds a portal lobe to a sensory connection you never knew existed. In the real sense of the word, it’s addictive. The fact that most every little store around Acadiana sells pork crackling at the register bodes well for how far this porky addiction has spread.” In that spirit, we huddled with University of Louisiana at Lafayette history professor and Cajun cuisine expert Robert Carriker to bring you this guide to Acadiana’s favorite snack". 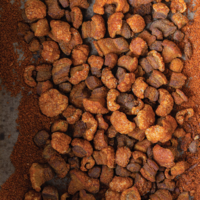 The Process: Boucheries still exist, but for the everyday cook creating cracklings can be a tough — and heat intensive — job.

Rocky Sonnier, who runs Bayou Cabins in Breaux Bridge, creates batches of cracklings for his bed and breakfast visitors, serving them up for the first meal of the day. The former winner of numerous crackling cook-offs through the years, Sonnier begins with four gallons of hog lard and 75 pounds of pig skins, slicing the pork into long slabs and cooking them for an hour and 45 minutes in the boiling grease.

“When they start floating and blistering, what we call eyes emerging, we take them out,” Sonnier explained.

He then raises the grease to about 400 degrees and drops the cracklings back in for about a minute or two. In the second round they pop like popcorn, Sonnier said, and that means they’re done. Removed from the boiling fat with a slotted spoon, Sonnier places the cracklings on newspaper and seasons them with salt, red pepper and a little garlic.

Sonnier learned how to cook cracklings from his elders 35 years ago. “In 1985, everyone had a different way of cooking them,” he said. [...]

What makes Cracklin so good

The key to producing tasty cracklings starts with the frying. Leave the cracklings in lard too long and they’ll turn dark brown [, hard] and burn. The fat should remain soft and [the meat] chewy while the outer skin is crispy when all is said and done.

“I look for the softness and the hardness,” said Desiree Ardoin, the spokesperson for the annual Port Barre Cracklin Festival. “There’s a happy medium in there.”

Seasoning also plays a role. Most contestants in the festival’s cook-off season their cracklings with salt and pepper, but many have used vinegar, cayenne and their own seasoning blends, Ardoin explained".

Read More: The Best of Cracklins 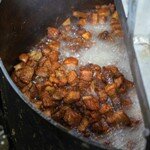 Oh, man. Now I am hungry AND miss living down South.

Contributor
My favorite is The Best Stop in Scott, LA, just outside of Lafayette, but it's hard to go wrong in that area.

I’ve got some lamb belly waiting in the freezer for making cracklins (and suet to render for making some yak/bison pemmican).

Contributor
I've used the neck skin on a goose for my cracklins. Lots of fat and flavor

Slightly different, but just as good.
1. Fly to Rome
2. Go to Termini Station and take the commuter train to the town of Frascati
3. Pick either one of the trucks parked in the main square and buy yourself a porchetta sandwich
4. Have another sandwich, this time examining it to see the perfect combination of crackling skin, fat, meat, and seasonings
5. Buy a couple more for the train ride back to Rome

We call them Pork Scratchings in the UK!
C

We have them in N.C. Some bbq places take the skin and deep fry them to a crisp.. They sick to your teeth, I had to turn the water pick up all the way..

I can get fresh chicharrones made at the Mexican market. The ones with some meat on them. I learned from my Filipino friends to dip it in vinegar with thin sliced chili in it. It’s really tasty that way and goes good with a beer.

Buster said:
I can get fresh chicharrones made at the Mexican market. The ones with some meat on them. I learned from my Filipino friends to dip it in vinegar with thin sliced chili in it. It’s really tasty that way and goes good with a beer.
Click to expand...

My Filipino daughter-in-law adds some thinly sliced cucumbers in her "dip-dip."

Have never liked cracklings. They're called pork rinds here, and are sold by the bag. Once we rendered our own lard, and skimmed off the cracklings, but didn't care for them.

Ambassador
Oh, yes. The ones they sell in the refrigerated section. Not in the potato chip aisle ...

But Cubans and Filipino people do it right. Masas de puerco, and the vinegar garlic dipping sauce ...

Pork Pie In The Oven!