An old sample of a mineral found only in the Belmont area of Charlotte, NC. It is not a mineral in its own right, but a quartz porphyry. This unique rock was used as the stone representing North Carolina in the Washington Monument. Other rocks called "leopardite" don't have the strange, regular pattern of spots that the Charlotte rock does. "Lepoardite is actually a metavolcanic rock. It occurred in a thin dike. It is described as a quartz porphyry. The white "matrix" is composed of plagioclase, K feldspar, and quartz. The "spots" are manganese and iron oxide minerals. It occurred at the corner of Belmont and Sigel Avenues in Charlotte on the property of the Salvation Youth Center (long gone). It is very rare now and collectors of NC minerals hold on to it tightly." 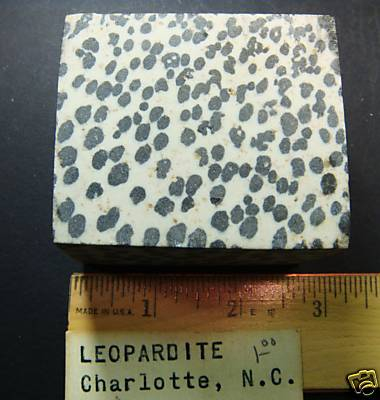 Is it just me or does this look a lot like a coticule? I have a slurry stone that matches it. So does anyone know anything about this Leopardite and if it has any honing qualities?
L

Cool looking. Have you tried it?

The big La verte coti yes. I don't think I will be lucky enough to find this Leopardite. After reading more it seems extremely rare.
L

Oh - I thought that slurry stone was the leopardite. Clear now

Reminds me of a spotted stone they sell from Alaska as a local semi-previous type.

LJS said:
Oh - I thought that slurry stone was the leopardite. Clear now

Reminds me of a spotted stone they sell from Alaska as a local semi-previous type.
Click to expand...

Yeah that is why it caught my interest it looks exactly like my Coticule La Verte Slurry stone. I just ran across an article about it in passing and thought it was interesting. Then after looking deeper and finding some old info on them. I found they are so rare it wouldn't be worth even looking into.
You must log in or register to reply here.