Le Grelot - back from the dead

Vintage Le Grelot by P. Hospital. Immersed in the devil’s spit you can see the model - Le Roi Soleil. As a newbie to French straights, I was hunting for a reputable one at a good price. 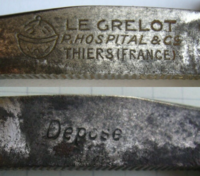 My weapon of choice - worn out DMT 325. By using the edges of the DMT I was able to do massive corrective work to the blade faces. The blade’s spine would be off the hone, and by moving the spine further away from the hone I was able to make contact with all parts of the blade’s faces. I’ve never seen this method done before, but it works amazingly well and is INCREDIBLY fast. I mean about a hundred times faster than the 40 grit alum. oxide sandpaper I made an attempt with. Also, since the edge of the DMT is flat, you don’t have to worry about divots in your blade face that might come about when you sand too much in one place.

The tang also got the DMT treatment, and that turned out even better. The left stamp gradually got more hollow towards the middle of the stamp, which worked out better for the DMT because it took down metal on the edges first. This method leaves nice sharp angles! Another benefit to using the DMT is that you can fine tune the angle of the tang around the tang hole so the blade centers in the scales properly. Luckily, this blade seems really straight, but if it wasn’t, I could grind it around whatever side of the tang hole until it was centered.

In the DMT experiment I ended up grinding a bit of the stabilizer off, and rather than leaving a half bitten stabilizer on I removed it entirely. The pics show it almost completely gone. P. Hospital made some Le Grelot 14’s back in the day, so this style isn’t that weird.

Then I bought a 4 x 1 sun tiger 1000 grit pocket hone from Lee Valley and rubbed this all over the surfaces. This smoothed out all the DMT scratches.

FYI - you WILL get streaks all over the blade faces, because your point of contact is very small. These streaks are extremely easy to remove with 400 grit sandpaper, and in my experience the worn out DMT and 1000 pocket hone didn’t leave behind any deep scratches at all. As for the tang area, that’s flat and I didn’t get any streaking there whatsoever. 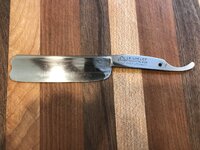 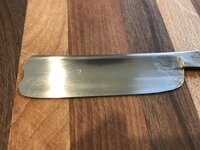 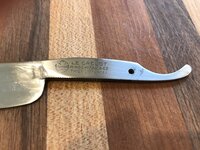 Stabilizer worked down even further, sanded up to 3000, and polished with Flitz. I swear the scratches seem to come out easier after the DMT/1000 pocket hone treatment. This thing is as straight as an arrow, it’s the straightest straight I have. Overall it’s not perfect, but I’m ok with that considering I went down into Hades to get it.

The only thing that concerns me is the pitting around the tang hole. It’s black, and I think black means it’s a patina and actually prevents further rusting? I would appreciate any input on that. 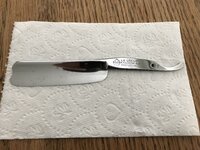 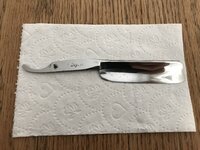 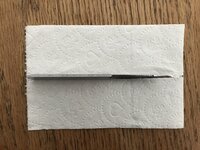 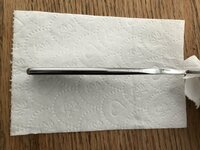 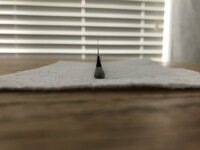 Awesome! A worthy blade for your time that's for sure.

Thanks, it just needs some shoes. I'm concerned about the pitting though.
S

Doesn't look like there is any pitting close to the edge, so you should be good. Greta job... Looks amazing.

You did a stellar job

You are going to have some issues with the remnants of rust. There are some deep pitting (holes) in the blade - some closer to the edge.
It is not such a big deal though, when you encounter them you will have to hone for a bit to get past them. They create "U" shaped irregularities in the edge.
Very nice save!

Thanks everyone, I like to deal with the razors that most people give up on lol. That’s how you get the best deals.


stone and strop said:
You are going to have some issues with the remnants of rust. There are some deep pitting (holes) in the blade - some closer to the edge.
It is not such a big deal though, when you encounter them you will have to hone for a bit to get past them. They create "U" shaped irregularities in the edge.
Very nice save!
Click to expand...

Speaking of, I just had to do this very thing with a restored W&B FBU. There was a nasty “hole” in the edge from pitting that I nicked myself on a few times. Enough was enough so I DMT’d it out this morning, still has a healthy 15/16 left.

Sometimes the pits don’t make it to the very edge, some are shallow enough they get honed out at the back of the bevel. Let’s hope for the best for this saved soul.

What about the pits around the tang hole? Do you think they should somehow be cleaned out before pinning, or are the pits dormant enough to prevent further red rust from forming?

musicman980 said:
What about the pits around the tang hole? Do you think they should somehow be cleaned out before pinning, or are the pits dormant enough to prevent further red rust from forming?
Click to expand...

So long as the active rust has been halted it should be fine. A good metal protectant will help some.
I'm sure down the road it may appear again given the location.
Proper maintenance will carry it for the rest of its life, which is now much longer thanks to you

I might clean the pits around the tang hole then fill them with JB Weld. My pinning materials are in the mail, and I've got a scale material in mind...

Those pits by the pivot are fine, inconsequential, and 'safe'. There's really no need to fill them.

Moderator
Great job. I know nothing about Straights but I think it is a great save. Interested to hear from you when you get to give it a test run.

Haven’t had the proper tools to make new scales, so I slapped on the old ones with a new faux bone wedge. 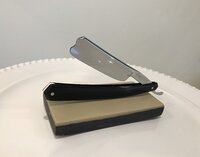 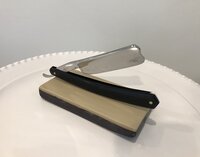 Contributor
You rescued a beautiful piece of art...

Looks good to me. The pitting around the pivot hole is a pretty minor thing. You could spend a lot of time for not much gain, by going all out on it, or just enjoy a very nice razor as is.
You must log in or register to reply here.
Share:
Facebook Twitter Reddit Pinterest Tumblr WhatsApp Email Link
Top