I finally got to the range on Friday to test fire the pistol. The barrel fit is still so tight that I have to let the slide drop at least half way for it to go in to battery. I was a bit concerned about this, as I feared that the gun might not cycle reliably. There was nothing to worry about. The gun ran like a Swiss watch. I had one failure to go in to battery and after running several tests with different magazines (using the same round that had first stopped the gun), I was able to determine that an out of spec cartridge was the culprit. When I got home, I tried the plunk test (dropping the round in the chamber) and it passed without an issue.

This is a BarSto match barrel. That means it has a TIGHT chamber. I am going to drop a chamber reamer in it and open it up to SAAMI spec dimensions. It is also about .0008 short on minimum headspace (no, I didn't add an extra zero to that), so I will open that up at the same time.

It runs. It shoots like a Les Baer which makes perfect sense, as Baer builds their guns so tight that when new, you can't cycle them by hand. You have to shove the muzzle against the bench to get them to unlock.

I put a sanding drum in my drill press and using a block of wood to raise the frame and keep everything square, blended the beavertail and slide to frame interface. This is as simple as it gets. Sand it till it all matches.

This morning, I tore it down (including removing the plunger tube), grabbed a 32 lpi checkering file and serrated the back of the slide. I also match serrated my three extractors so when I need to replace one, it will drop in and match.
How I did this:
I pulled the slide from the frame and stripped it except for the extractor and firing pin stop (to keep the extractor where it belongs). I sat the slide on a hardened bench block and laid the checkering file on the block as well, so when I started my cuts, the lines would be parallel with the bottom of the slide and perpendicular to the centerline of the gun. 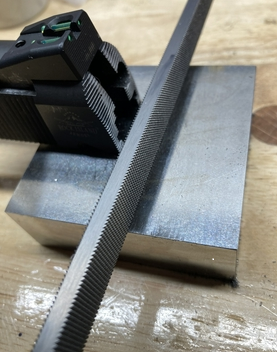 This job was harder than it looks and easier than I had feared. It is a NICE custom touch. I have shot a 1911 with this treatment and there is no flash or glare from the back of the slide.
Once I had my first "file width" of lines about half way cut, I moved the slide to a bench vise with soft jaws and finished the job, pulling and changing extractors till all three were match cut.

Next, was to put the slide back on the frame with the barrel in place and using the serrations I had already cut in the slide, finish the corresponding part of the frame to match. This is a crummy picture, but it serves the purpose. 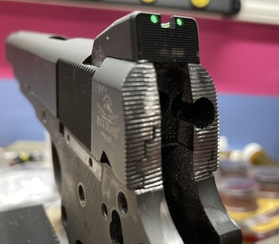 Back to the range trip:

The gun shot about 4" low at 20 yards, so when I got home, I took the necessary measurements, did the math, and ordered a new fiber optic front sight from Dawson Precision of the correct height to put the gun on target. While ordering the sight, I noticed that they had a front sight calculator, so I plugged in my measurements and their calculator came up with the same answer I had. Made me feel good.

There is a gunsmith at the range and he went over my pistol. It looks like he** because of all the aluminum marks on it from me using aluminum drifts. When he racked the slide and tried the trigger, his eyes got big. Absolutely no creep, crisp as breaking glass, and no perceptible overtravel. Oh yes, it also breaks at 2.75 pounds, consistently. I have a LOT of hours in just the trigger. The range master grabbed it and did the same thing, handing it back to me and in front of the smith, said "Best trigger of any handgun I have ever tried". I thanked them and we left.

Today, I go to Double Eagle Pawn Shop to pick up my new AK47. It's an underfolder built on the Polish design. While I'm there, I'll drop the 1911 frame off to have the serial number moved (under the right grip panel). Once that is done, it will be time to start work on the refinish job. Strip parkerizing, hand polish (after lapping all flat surfaces to keep them FLAT), and hot blue. Polishing a 1911 is way tougher than it looks. Edges must stay sharp, curves must stay uniform and smooth, and most importantly, flat surfaces must be as close to an optical flat as possible. Nothing screams 'amateur' as much as a gouged or wavy flat and smeared lettering.

I'm beginning to think I might actually finish this thing.

Your knowledge of the workings of a 1911 is absolutely fascinating to read and makes my head hurt at the same time.

You have probably forgotten more about the 1911 then I will ever Learn.
M

OkieStubble said:
Your knowledge of the workings of a 1911 is absolutely fascinating to read and makes my head hurt at the same time.

You have probably forgotten more about the 1911 then I will ever Learn.
Click to expand...

I don't deserve that, but thank you.
I love these pistols. So much so that I have spent a lot of money learning how they work and how to work on them. I only wish I could shoot well. I'm terrible with a handgun. Always have been, regardless of how much I have practiced.

Shotguns are also a weakness of mine. There are four Italian O/U shotguns resting in my safe. What gauges? 16, 20, 28, and .410 (which is a bore, not a gauge). I don't know how many tens of thousands of shells I have fired through shotguns over the years and I still feel like a flagrant incompetent when blasting away at clay pigeons. I don't know how the people around me can keep from laughing. Perhaps my hearing protection saves me some small embarrassment in that regard.

The bottom line; I love to shoot. I'm no good at it, but that doesn't seem to detract from my enjoyment.

I spent my career as an engineer in aerospace. 43 years to be exact. I am currently learning how to work on mechanical watches and have already fixed one antique clock of ours and have two more that need attention. I don't know how to take a day off which is sad, because I am retired.

There is an old saw about engineers being naturally fascinated with guns, clocks, and locks. Yes.

I'm seriously considering leaving the serial number where it is, just to be different from the first BBQ gun.
More to come on the pistol. I'll be out and about today and will pick up what I need to strip the parkerizing.

Good read and I hear ya. I used to be a pretty good shot and then I got old.

Mhinagoya said:
Fellows, I apologize. I never thought of doing a step by step and now, all the internal work is finished. I will be more than glad to report on the initial firing, sight regulation, and do a series on surface prep and bluing.
Anyone who wants the home recipe for hot bluing, please send me a PM with your email address and I'll send it to you. You need a 'grill' propane tank, turkey fryer burner, and a glazed steel pot from somplace like WalMart. I think I paid eight dollars for mine. The chemicals are Sodium Hydroxide (lye), Sodium Nitrate fertilizer (NOT Ammonium nitrate), both sourced from Amazon, and two gallons of distilled water. CHEAP, and outstanding results. You will also need some iron wire like you tie rebar together with (hardware store), and a couple sticks of steel rod (same hardware store). I bought a four foot chunk of 1/4 inch and cut it in two. The rods are for stirring and hanging parts.
Paying a gunsmith to hot blue it the first time is what drove me to learn how to do it myself. His price was reasonable, but the finish wasn't what I was looking for. I wanted a black mirror finish. Blind Hogg's recipe gives just such a finish and at a somewhat lower temperature than commercially available salts from gun parts suppliers.

Note: Don't put anything that isn't iron based in hot bluing salts. It can kill the salts or it will simply dissolve (zinc and aluminum come to mind). This process isn't gradual.

Yes, I learned how to hot blue pistols and small parts in my garage with a turkey fryer, lye, and sodium nitrate fertilizer. You can't imagine how handy this is. Idiot scratch? Blend it out, fire up the tank, and all is like new after 20 minutes in the salts. Want to polish out your rifle's bolt handle and re-blue it? Easy. A buddy polished out a single action Ruger revolver and an old, beat up PPK and ran both through my tank. They looked better than they had when new.

One last thought; I didn't give credit where credit is due. Photographs do not and cannot do those grips justice. They are gaboon ebony inlaid with cocobolo and they are flawless. Absolutely stunning. I was blown away when I opened the package. They weren't cheap (close to $150), but if you saw them in person, you would agree that they justify their asking price. They are made to order by a company called WoodCaliber. You will wait a couple of weeks for them (maybe more), but when they arrive, you will have some of the finest 1911 grips on the market.

Let me know if you want the "how to" for hot bluing in the garage and I'll send it to you in a PDF file.

Please by all means send me the file on how to do the hot blue, to [email protected]

I tried to find a way to send a pm but that feature does not seem to show.
M

jkingrph said:
Please by all means send me the file on how to do the hot blue, to [email protected]

I tried to find a way to send a pm but that feature does not seem to show.
Click to expand...

Bill.
You must log in or register to reply here.

Making razor scales with no shop, no bench, no experience and no skills.
2 3