As long as it ain't faux shrimps!

The Mrs made Shepherds Pie with cauliflower, we don’t have a food processor so the cauliflower was not mashed like taters but it was sure good 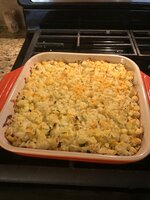 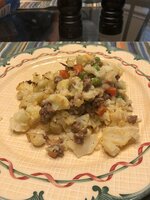 Jnatcat said:
we don’t have a food processor so the cauliflower was not mashed ...
Click to expand...

There's a cheap fix for that!! 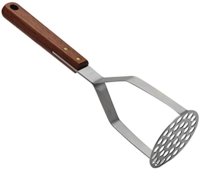 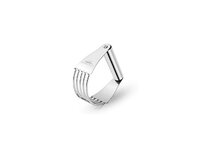 Or a hand mixer.

My Cardiologist told me that with my atherosclerosis, there is no way I should ever consider the keto diet.

Ejones0310 said:
My Cardiologist told me that with my atherosclerosis, there is no way I should ever consider the keto diet.
Click to expand...

Doctors being specialists, they tend to know a lot about their specialty, but outside that they can fall back on received knowledge from decades past just like the rest of us. I encourage you to make your own investigations about the benefits of the ketogenic diet, and in general the dietary issues around your condition, and make your decisions from there.

This is just the tip of the iceberg.

Ambassador
Tonight was something very interesting. Here in Austin, Texas we have a restaurant that makes a spicy Mexican/Spanish rice. Its wonderful. Haven't ate it in years. I thought I would make that recipe and substitute "riced" cauliflower instead of regular rice. Its simple. Onion, jalapeno, garlic, cumin and cayenne...s &p. Saute it all up in a little butter or olive oil....bingo. try adding a little chicken stock or maybe a small amount of chicken boullion base.

Oh, the other is grilled flatiron steak with Hollandaise sause...just sayin. 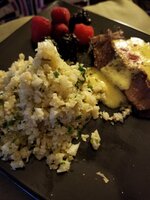 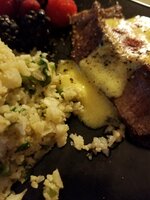 Doc4 said:
Doctors being specialists, they tend to know a lot about their specialty, but outside that they can fall back on received knowledge from decades past just like the rest of us. I encourage you to make your own investigations about the benefits of the ketogenic diet, and in general the dietary issues around your condition, and make your decisions from there.

This is just the tip of the iceberg.

Sugar and carbs are the culprit.

Ejones0310 said:
My Cardiologist told me that with my atherosclerosis, there is no way I should ever consider the keto diet.
Click to expand...

It's time to change your doctor.

Ambassador
Whoops I forgot to tell you to add chopped cilantro to the mix.

That frickin cottage pie looks amazing. I typically eat much lower fat than traditional low carb (trying to sharpen up just a tiny bit) but every week or so have a higher fat day. I only have riced cauliflower and don't know where the hell my food processor is, I wonder if that would work? And knowing me, I'll be too lazy to buy one of those smashy doohickies, too, but I might give this a shot on my high calorie day.

And the thing is we knew it. We knew it fifty years ago. We knew it was a problem but we were driven off course through some of the things that Gary [Taubes] talked earlier and because the Sugar Research Foundation actually made us go off course on purpose. Because they sponsored a whole program within the Sugar Research Foundation to basically obfuscate the truth. Started in 1965 with a literature review published by the New England Journal by Fred Stare, the head of nutrition at Harvard School of Public Health and his assistant Mark Hegsted who became the head of the USDA which singled out fat and cholesterol as the dietary cause or coronary disease and downplayed the evidence that sucrose was also a risk factor. The SRF said the reviews objective contributed articles for inclusion and received drafts and the SRF's funding and role were not disclosed. It's all been a big fraud. The whole thing. The last 50 years of nutrition information in America is a big fraud. All of it. And that's why diabetes has continued to increase not just in prevalence but in incidence. Because we actually put the Bunsen burner underneath it to make it boil over. Because we were lied to. Now you guys know that. The problem is we got to get everyone else to understand it too. So is sugar public enemy number one? Trans fats used to be. But now they're gone. So now this is public enemy number one because we could do something about this. And you wouldn't have to go low carb. You just have to go low sugar. It's called real food.

Ambassador
I rarely eat sugar. The only sugar in my house is for the hummingbirds. I drink vodka sometimes though.

Not so much about sugar... it's about carbs.
So if you do lots of carbs you are in the same boat.

The issue isn't carbohydrates, the issue is the gross overconsumption of them relative to most people's actual caloric needs. Having spent this many years studying nutrition and coaching folks about diet, there are two variables that remain constant: people greatly underestimate how much they're eating, and people greatly overestimate how active they actually are. Case in point, ask someone how many calories do they think might be in, say, a large meat lovers pizza. One thousand tends to be a common answer, because "that's a lot", after all. Try 3000-5000.

Carbohydrates are, while not completely essential, a very convenient energy source that requires few resources to convert to energy. Their usefulness is obvious, the issue is that most folks don't actually move around that much, so obviously, less energy is needed. Americans in particular have also been brainwashed into thinking that if they're not constantly snacking they're going to wither away and die within the next couple hours. By the time they know it, they're consuming far, far more calories than necessary; normally in the form of simple sugars and poor sources of dietary fat. If already eating i in a caloric surplus, and most are, a combination of high sugar and high fat makes it very easy to store energy in the form of body fat. Not to mention those types of foods are often low on the satiety scale, at least relative to caloric density, and frequent and uneven insulin spikes just drive people's hunger through the roof. All said and done, someone who works a desk job, then goes home and sits on the couch, ends up eating 3500-4000 calories a day instead of the 2000 they swear they're eating. High fructose corn syrup is another culprit, as many aren't aware that fructose repletes liver glycogen, and the liver can only hold so much before spillover occurs. Fast, convenient, calorie laden food, coupled with a pharmaceutical industry filled with medical professionals who won't even bother telling you that metabolic syndrome can largely be controlled by diet. That's maybe not a bad thing, I've heard some downright awful advice given to patients regarding nutrition. The fact is that GPs aren't schooled on things like this, but since they have Dr in front of their name, they feel they're automatically experts on everything. Many don't even understand cholesterol and it's function in the body, yet they're free to write off scripts for statin drugs that open up an entirely new can of worms.

Poor nutrition information, people less active and a very stubborn group that will continue to rationalize their poor eating habits and have no willingness to change, even if what they're currently doing kills them. That is, if the pharmaceutical industry doesn't kill them first.

tonich said:
Not so much about sugar... it's about carbs.
So if you do lots of carbs you are in the same boat.
Click to expand...

If we are talking ketogenic ... yes (except for fibre).

If we are talking about someone eating S.A.D. (standard America diet), getting them to cut out sugar and other refined carbohydrates is the biggest and best step forward they can take ... whether they want to take the further steps to get to keto or not.

Ambassador
Tonight we grilled chicken, pork chops, sausage and poblano peppers. I steam some cauliflower and made faux mashed potatoes. Im not a sauce guy really but tonight i put on a little sugar free. 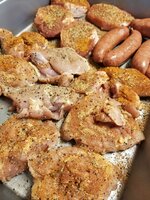 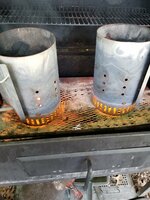 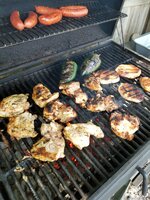 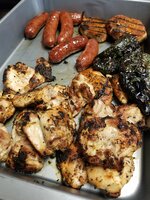 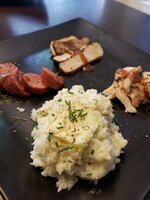 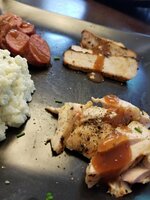