Keep Brisbane in your prayers

If you haven't heard, there has been a bit of rain lately on the eastern coast of Australia.

Unfortunately, there has been some flash flooding in Toowoomba which for those of you who will not know, sits on the very top of a mountain range. The received 6 inches of rain in 30 minutes, and due to having a large amount of rainfall in the last two weeks, the following happened:

This fell into the already sodden valley below, plenty of news photos and videos if you care to look. Many people have been swept away, including those in cars trying to flee was was a 6-foot high wall of water in the valleys.

In 7 hours time, Brisbane's CBD will have 12 substations switched off to prevent electrical shorting across the city. Many buildings and homes will be flooded in the course of the next 3 days. Estimates of 6500 homes to be inundated tomorrow alone. Thursday is likely to be the worst day in Brisbane.

Joel I will. This is just incredible. 9 people killed already due to these floods...

My heart and thoughts go out to our Aussie brethren.

I wanna be sedated!

Mr. Scruffy said:
My heart and thoughts go out to our Aussie brethren.
Click to expand...

I too shall keep out friends in the land down under in my thoughts and prayers.

Blimey! Thinking of you guys from across the ditch.

Good news this morning - the peak of 5.5 metres forecast for this morning was well below that mark. It's not over yet though, plenty more water to float down the river. The Brisbane River is also tidal, so the water is going up and down all the time with the tides. There might be further peaks to come yet.

Ipswich, just south-west of Brisbane experienced a peak overnight of around 20 metres (about 66 feet). 22 metres was forecast, and this saved about 3,000 premises from being flooded.

Still a long way to go. Estimates at this time suggest 2 years to rebuild all the infrastructure which has been damaged, and a cost of around $12 Billion dollars (Aussie and US dollars approximately equal). This is not just in Brisbane alone, there are many rail lines all over the state which usually carry coking coal for export which have been simply washed away. The Queensland Premier (Governor equivalent) has said this morning that this would be a rebuilding process that you would normally see after a war.

A couple of quick statistics:
25,000 homes have been totally or partially flooded in Brisbane alone, and many, many more across the rest of Queensland and the north coast of NSW. It's believed about 11,500 residential homes have been fully flooded (water to the gutters).

The death toll stands at 12, with another 80-odd reported missing.

Probably the best outlet for overseas people to look at is the Australian Broadcasting Corporation news website (our equivalent to the BBC or even NPR in the US): http://www.abc.net.au/news/

Not to derail the thread, but please keep Sri Lanka, Brazil, and the Philipines in your prayers too.

The link below gives before and after shots.

This is a photo of the apartment belonging to my friends cousin....

It is a five story apartment block. 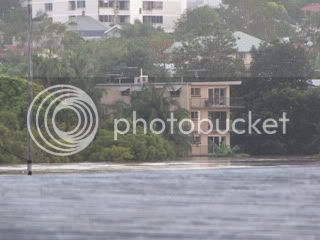 Batten down the hatches and grab your rubber boots everyone.