FarmerTan said:
Lol, I sure feel sorry for your friends, my friend!
Click to expand...

Let's just say I'm glad my wife don't have an account on here!

She already hates all the enablers on here..... which is basically every single one of you.

She already hates all the enablers on here..... which is basically every single one of you.
Click to expand...

Damn it.. I'm new here!! I don't need to be blamed for what you degenerates were doing before I got here!!


But I certainly approve of it!!

Hydguy said:
Damn it.. I'm new here!! I don't need to be blamed for what you degenerates were doing before I got here!!


But I certainly approve of it!!
Click to expand...

I'm kinda (yeah, kinda, lol) illiterate in the ways of the interwebs. My 86 year old Mama is tons better than me.

But I'm on here too much, and I NEVER looked at the stuff that tells who is online, who's a member, etc. But last night I did, and I saw a bunch of "probable lurkers" outnumbered members like 2 to 1 , I think.

So all you lurkers: join the fun! To all you members not joining the Hall of Fame: do it!

To all you old fart know it all's: be nicer! People who just joined us weirdos that spend time talking about shaving need your wisdom, not your condescension! You were a newbie once.

A long time no see, folks. Here's a picture, details (may) follow, lol. 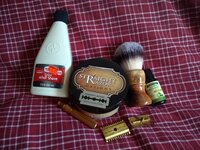 Thanks. That little bottle has gone a looooong way! I put about 20 drops into that aftershave and it's right up there with expensive ones to my nose.

So, I was the winner of something like 30 or 35? Rockwell blades. Had no idea what to expect. Tried them once back in January, PC (Pre-Covid, lol). It was a decent shave, but for some reason I put them aside.

The Frankenrazor has been used exclusively with the Rockwell blades for about a month.

I had been using the Marvy experimental brush with all kinds of strange soap.

Today I used the awesome brush that I call "the all seeing eye" that @Graydog gave me. (Lol, I do rinse it!) The soap is from @njpaddy and is glorious. Glycerin based? You could read a newspaper through it, and it provides plenty of glide, cushion, comfort, etc.

I may use the Marvy experimental non-rinsed brush for all of my "Arko August" shaves to see which is the winner between my face and that Marvy!

Thank you. As you can tell if you read this entire thread, I have poured my very existence into this ongoing research!

FarmerTan said:
Thank you. As you can tell if you read this entire thread, I have poured my very existence into this ongoing research!
Click to expand...

So many comments, so little time. 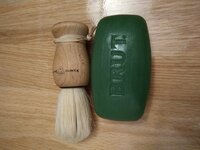 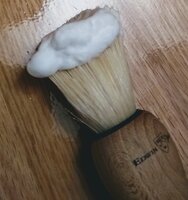 The above two pictures are what happens when I'm tired and my brain skips lanes.

I've got this brush that I haven't rinsed out since last August, I think.

Thinking is dangerous, lol. So I decided to use some Brut bar soap mixed with whatever is in that brush. Smells a little like Arko. So I dampened my face and the brush and rubbed it on my Brut soap. Smelled like you might think it would. A little off.

Face lathering was wonderful. Really slick, but the seventh shave on a Rockwell blade might be one too many. Two passes produced a BBS shave.

Followed it up with some strange AS brew I concocted: equal parts Avon Blend 7 and something else I can't remember, with a few drops of Orange essential oil! Don't laugh; my wife liked it!

I broke down and rinsed that brush off that @shavefan gave me after about a year of letting it do a second Petri dish experiment.

You folks are reading the writings right now of a bonafide hero: when I rinsed it out, I ain't lyin'.... SOMETHING BLACK rinsed out of it! I assume a spider had made a home in that brush and I unintentionally evicted it! Not really sure what it was, as it went down the drain so fast. My werking hypothesis is that the Arko fumes killed it, thus saving my life. We'll never know for sure I suppose.

You might note the lather from the Brut and whatever else was in that brush before I rinsed it out. Really nice stuff.

Last night I looked at that Marvy brush that hasn't been rinsed since July of 2019. It had a "long bristle" sticking out of it. I pulled on it, and a whole clump came out! I then took it outside and ran my hand over it and it shed like crazy, and finally stopped.

So I decided to use it today, face lathering Arko for the last time. Well, it didn't lose a single hair! So I plan to use it as long as it'll last. Hopefully throughout August.
You must log in or register to reply here.
Share:
Facebook Twitter Reddit Pinterest Tumblr WhatsApp Email Link
Top