Tomo said:
Long story short, the Jnat is back in my good books (for touch ups). I’ve even come to like the slight side to side slope of the stone. This used to bug me but I come to see it as an advantage. Using the stone with the slope falling into the blade, it holds water and slurry beautifully. Using it with the fall away from the blade it useful for diluting slurry in the final stages.
Click to expand...

I am very fond of JNats too, and have often deliberately re-created this situation with perfectly flat stones, holding the stone in one hand and tilting. Like you, I find it very useful for water/slurry management. But there is also a tendency for the stone to engage the edge more when it is moving "uphill" on the stone. It's an alternative or supplement to the trick of slightly applying torque to emphasize bevel contact over honing guide contact.

First attempt with a shimmed GC.68 (~ 0.78mm gap). It felt like there was extra horsepower for pass 1, without making it unpleasant to use ATG. I included full XTG and ATG without getting any styptic drama.

Got a BBS face and DFS neck (which is all I try for there).

Is it worth it? Probably. I'll use it unshimmed tomorrow, to firm up my opinion.

If I was going to do this regularly, I'd try to make a neater-cut shim than this attempt. 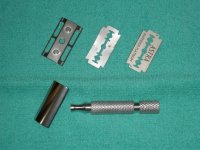 It’s been in the low 90s with about 80% humidity here. That’s not in @Contact_vs_Feedback ‘s realm of hellfire but it’s pretty warm for here in June. I managed to sunburn my head today in less then an hour (always wear a hat gentleman.) The sunburn brings up PAA Frost Byte. I talked with @Sinnbad11 about it a few months ago and was planning to buy some on my year end restock but managed to get some in a trade along with some matching PAA Frost Byte Star jelly. I figured hot temps and a sunburned head was a good excuse to break it out. Frankly the Frost Byte wasn’t as cold as I thought it would be and I’m stuffed up with allergies so I can’t smell it right now. From memory it’s pretty minty. My wife says I smell like a spilled can of wintergreen chewing tobacco. I don’t think that’s a compliment. I like the Frost Byte though. It does feel good on the sunburn and does cool you down.

Head shave and neck/goatee trim only.

The more I use Star Jelly the more I like it. It took a little bit to get used to but it’s grown on me.

Have a great day gentleman!

Still in, I think we're getting some releif from the high humidity today so will be out at the park with the kid. On the mwf/Timeless alum/nacet/sem boar.

Temperatures here is also getting better and in a week or two Monsoon will arrive.

My shaving has been interrupted since past two weeks due to a particularly nasty bout of red pimples (I know I know, nasty information) which are just giving me a tough time, as they are very slowly subsiding and being painful and irritation.

I'm looking forward to shaving again, after this irritation business is over.

I blame the stress of the academics more than the temperatures, thankfully I completed a long-term project and now I can look forward to preparing for next step for my career.

henrickd said:
My wife says I smell like a spilled can of wintergreen chewing tobacco. I don’t think that’s a compliment.
Click to expand...

In some parts of the US, that’s practically a mating call!

Contributor
Still in! Won't be shaving today. Need to give the neck a break. 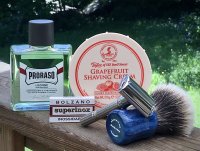 I haven't shaved since Sunday. But I haven't spent any money either. So I look like hell but at least I'm still in restraint. One thing I'm learning right now is that pledging to use synthetic brushes exclusively for a solid month apparently makes me not care much about whether I shave. A lot of the eager anticipation I usually feel about a daily shave has dried up rather quickly, and that's a little surprising.

I dug out my Schick Krona that @hopper_64 remined me I purchased a couple years ago at a thrift store for under two dollars. I cleaned the thing up and never used it. I would look at it occasionally, but always grabbed something else. Hopper_64's SOTD post reminded me that I had that razor and encouraged me to give it a try.

I loaded up the Schick with a Dorco Prime that has well over 10 shaves on it that I received from @JWCowboy. I used my homemade soap. I had no idea what to expect but I am pleasantly surprised. The shave was very mild and I find the razor to have a large sweet spot. It was very easy to find and hold an efficient angle with this razor and it was very forgiving on mistakes. I find the Krona to be very well balanced and comfortable in the hand.

I found the shave from the Schick to be very different from vintage Gillette razors. I like this razor a good deal and will likely take it on a camping trip with me latter this month. Glad I purchased it and am looking forward to shaving with it in the future. Thanks @hopper_64 for the push. 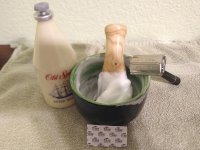 Contributor
Still in. No shave yesterday but will shave when I get to the cottage tonight. With the dreaded Simpson Classic synth. Not a brush I look forward to using. @Owen Bawn did you use this gem this week as previously discussed? Apologies if I missed your glowing review if you did.

henrickd said:
I managed to sunburn my head today in less then an hour (always wear a hat gentleman.)
Click to expand...

Thank you for the PSA, you remind me that I need to get a new baseball cap and more importantly a new panama hat.

Now on to shopping

wmadoty said:
Thanks @hopper_64 for the push.
Click to expand...

Contributor
Still in. Moved on from the Friodur to the CVH. 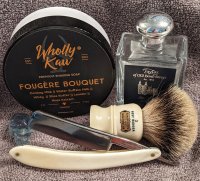 Owen Bawn said:
I haven't shaved since Sunday. But I haven't spent any money either. So I look like hell but at least I'm still in restraint. One thing I'm learning right now is that pledging to use synthetic brushes exclusively for a solid month apparently makes me not care much about whether I shave. A lot of the eager anticipation I usually feel about a daily shave has dried up rather quickly, and that's a little surprising.

Or perhaps I'm just fat and lazy.
Click to expand...

Well you might be, but it’s also hard to get excited about shaving with a brush that never had a soul. Synthetics are a sometimes brush.

I used a Gillette New improved, replated in Nickel, that I had totally forgotten about. The NI is definitively one of my favourite razor series.
I gave up on the TOBS cream and went back to SV soap for the last 2 shaves. The impact of that switch has been smoother shaves and what seems like improved stubble-softening, as well as post-shave feel and moisture. It could be the oils and soap quality compared to the TOBS cream that contributes to the better results. T
L

I was having too much irritation this afternoon on my throat so once I clocked out, took a walk, barely lukewarm shower and on it went . Two pass W / X TG no clean up. Not the smoothest face I ever had but just one stinging area with the alum block, on the irritated spot. No nick. No cut. Flooded the whole face with Proraso sensitive post shave balm. We shall see how tomorrow will go. I guess I will spend my day pouring aloe vera gel on my face as the skin was dry to say the least unless I just put some nivea cream on it ... Time will tell.
Last edited: Jun 10, 2021
You must log in or register to reply here.
Share:
Facebook Twitter Reddit Pinterest Tumblr WhatsApp Email Link
Top Bottom