But today this little guy got back in rotation 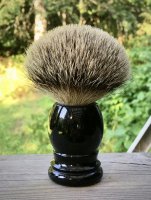 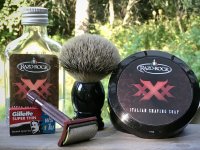 Coming back to the Kamisori after some time, it felt good. 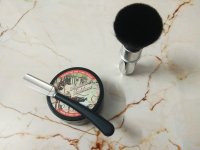 Ps: My search for a proper DE and SE razor is over as I've got a very balance rotation and I'm happy with it.

As for the SE razor, I've been bestowed the best / Perfect razor as Birthday Gift

Still in, first shave with the baby boar of my collection, the Vulfix No.28 and pleasant surprised at how well it performed.

Great looking lineup and thats actually what I thought, I have a Shavemac in a bulb knot that I find way too "bulby" (it rounds way, way too steeply for me), but obviously its a preference/ymmv thing. Those fans do look very nice.
H

Contributor
Still in. And still so occupied with honing issues that I can't imagine buying anything.

I think I might be finally ready to say I'm good at honing razors. Oh, I've been able to hone razors well enough to put them on pasted balsa. and get a great shave, for a while, but now I'm seeing the dragon.

Turns out my bevels kind of sucked, at least under the microscope, being picky, and I didn't know what to do about that. I had tried the knife trick, going down to a low-grit stone. I'd tried diamonds. I'd tried pressure. But none of that got me good results (scratches were too deep), so I went back to low pressure and would basically give up after about 2,400 strokes on a 500 or 1000, deciding that was good enough, and move on.

Watching some Doc226 videos set off fireworks in my brain. Multiple reasons, but one was the solution to my bevel problem: use serious pressure, but use it on a 1000 grit stone! That's not something anyone would ever think of with knives. Dropping down to low grits when you want to influence metal is so ingrained. Anyway, it has worked superbly. It led to the edge I shaved with, off a 1000 grit stone. It has led to crazy sharp edges, and a much easier time, on the higher grit stones. My bevels are a work of art under the microscope. Finally.

So much to explore, including the possibility that I will decide, for the second time, that my razors should be sharper than they are, and I have to start over. So I'm too busy to buy new stuff.

I finally broke, yesterday (no shave today), from my streak of shaving with the same Iwasaki kamisori. I had to, because I was not done refining it from the 1K edge I shaved with. So I used...an Iwasaki kamisori. Yes, I'm a fan. This one was a new-production tamahagane, the one that knocked me out of the June GRUME like a tornado. I regret nothing. It was a great shave, and a reminder that I need to stretch all I've learned about honing if I am ever to compete with Method edges like the one I had on that tamahagane.

Tried skipping WTG on my cheeks, as suggested elsethread, and got a comfortable and acceptable DFS with 2 passes (approximately XTG, then ATG).

The MWF was getting hard to use, so scraped the residue out into a smaller container. I'm looking forward to starting a new puck.

Multum in parvo said:
There are a couple of brands but all say 80%/160 proof. I’m looking at a bottle of Duru.
Click to expand...

I found this one at a small local store near my work yesterday.
And since I'm already out... 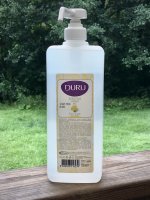 hopper_64 said:
I found this one at a small local store near my work yesterday.
And since I'm already out...

Have you tried it already?

Yes, how is it on the skin?

These lemon kolonyas you lads are getting are perfect for ARKO SHARKO AUGUST.

Owen Bawn said:
These lemon kolonyas you lads are getting are perfect for ARKO SHARKO AUGUST.
Click to expand... 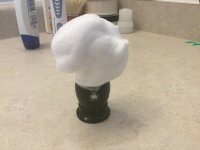 Another shave today with the muhle stf, still surprises me how it feels so... not good/limp when rinsing in hand vs actually using. 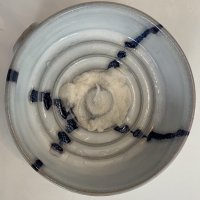 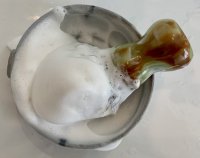 I'm not so versed with Cotton Candy lather opting usually for wetter/denser so this is only to showcase what "I" can manage with this brush.

...after about 2 minutes total: 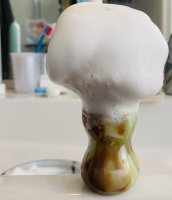 It's scrubby, it's dense and it has a super strong backbone. If you want to splay it you have to push down a bit otherwise it won't open up. Whatever you do you will never feel any scritch, scrub yes - tons if it - but no scritch.

Still in, and I can see the finish line for this month.

This morning a descent shave with my Muhle Rytmo (shimmed because it is realy too mild). After 5 shaves this week with this razor I feel a bit happier with this one, but still not comparable with the effectiveness of my focs or old style clone.
5th use of a rapira platinum lux blade, still smooth and sharp, one op my top tier blades.
Soap was a mix of Barbiere di Figaro (TFS) eslusivo mixed with proraso wood and spice cream.
DFS shave - 9/10.

Multum in parvo said:
Have you tried it already?
Click to expand...

Multum in parvo said:
Yes, how is it on the skin?
Click to expand...

Yes I tried it this morning.
Smells like Lemon zest, I like it.
No irritation so far.
L

last shave of the month, nothing to rave about, clean simple shave

Still in. Same software, though Estoril cream won’t make it another week.

First shave with a new puck of MWF. I fed it some warm water and glycerine yesterday, to get it to stick to the bowl. Excellent result, and that's my favourite soap sorted out for the rest of the year.
You must log in or register to reply here.