Contributor
Ambassador
Well, in addition to his incredibly generous LE Pipe PIF, @Whisky had sent me a couple of estate pipes to play with to try my hand at restoring them. I am trying to do this one all by hand. I could set up a poor-man's buffing station with my DeWalt variable speed corded drill in a vise with some cotton wheels, but I'm hoping I won't need them. There are some indentations in this pipe, that I am pretty sure are original, that I may try to steam up, and then I may need to polish the stummel on a wheel, but I may leave them alone.I have not decided yet. Some Halcyon II and some paragon wax are inbound, and I have microfiber cloths on hand, so maybe I can keep this project to hand work.

So far, I have removed the stinger from this Hardcastle billiard and the stem is soaking in Oxiclean now. I scrubbed the stummel with Murphy's soap and a soft toothbrush, then rinsed and dried it. Adam was kind enough to ream this for me because I don't have reamers yet.

Next I tried to get the char off the rim with Mr. Clean Magic Eraser, but no progress there. I have some micromesh pads inbound I will try later.

Next, I cleaned out the airway in the stummel with alcohol and bristle cleaners. I also followed @RookieGuy excellent example and had a bowl of Carter hall in a MM cob with a cup of Donut Shop coffee. 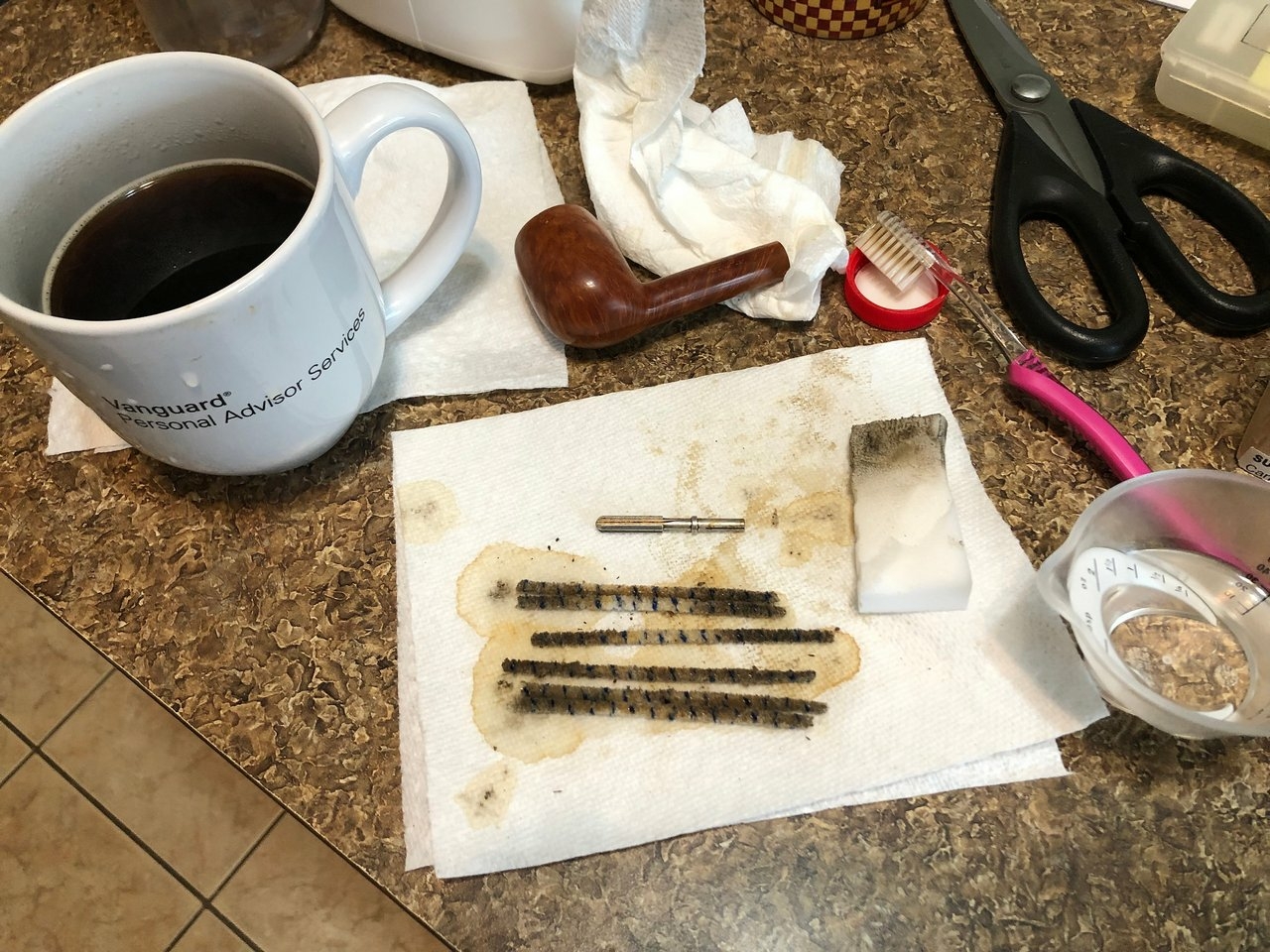 That done, I plugged the airway in the stummel with a folded pipe cleaner and stuffed a couple of cotton balls into the bowl, and filled with alcohol. Of course, I got it all over the bowl, but dried that up with paper towels pretty quick and I think I can get away without staining it later. Letting the bowl soak and the stem soak in their respective liquids, and I may get after it again tonight.

I suspect the magic eraser will clean up the stem pretty well, but I will likely have to wait for the micromesh pads to shine it back up again. Hopefully it will take the char off the rim as well.

The nice thing about this is, as Adam told me, I can learn without ruining a valuable pipe. I'm certainly having fun! I suppose, since it is a lesser pipe, I should probably try my hand at steaming out the dents. I may then have to do some stain or get the buffing wheels, but what the heck, If I'm gonna learn, may as well learn on this! I'm not experienced enough to date this pipe, but I suspect it was after Hardcastle was sold to Dunhill and it was the Dunhill seconds line.

Thank you, Adam! I'll post progress photos as I move along.

Contributor
Following with interest. I still have a bunch of pipes with vulcanite stems that have to be reconditioned…

Following. Just got my dad's old pipes and stand.

Nice work so far! Restoring pipes is a blast!

Contributor
Ambassador
Well, the bowl alcohol treatment worked, look at the yellowish cotton ball. The stem did not need a second Oxyclean soak, apparently, no discoloration there. The stain is fine, even with the spilled alcohol, apparently, if you're quick about getting to it, it does not do too much damage. Stinger sat in alcohol overnight, it's clean.

I think I won't steam the dents out on this one, so it's become less of a 'restoration' and more of a 'deep cleaning' of an old pipe, but it's generally in such good shape, it's going to be a good one to test my hand polishing of the stem and hand waxing of the stummel without a drill buffer. If I steam the dents, I might need to restain and/or polish the stummel a bit before waxing. It's a good first project, though, and we shall see how good I am at cleaning this old girl up.

I'll get after the rim char when my micromesh pads come in. Saliva will take the char build-up off the rim without damaging the finish.

Contributor
Ambassador
Ok, I got the stem rubbed off with the Mr. Clean Magic Eraser. So the next question is, do I need to sand that, or can I take the polishing cream to it? I have wet/dry paper up to 5000 grit, but the micromesh pads are still on the way, not here yet. The cream I have is a microabrasive cream used to be called VIM now it's called CIF, but same stuff. I would rub it out for an hour or so with an old T-shirt. Would using the micromesh pads speed things up a bit? I've never done this before.

I'm hoping to do this one all by hand, no buffing wheel, but I'm not opposed to getting wheels for my drill. What's the consensus among you guys who have done this before?

And are the micromesh pads wet/dry or do you only use them dry?

Is it a vulcanite stem? Than cif will work. I use it to make those nice again.
Protip, make sure all the paste is gone. Scrub it good under running water. The paste tasts not nice and has a gritty feeling on your lips (yes i got the tshirt).
On the other stems is my experiance subpar with cif. A lot of work and get results.

Contributor
I would vote for the cheapest toothpaste that you can get and the residue, if any, won't kill you

Contributor
Ambassador
Polish it is, then! I won’t wait for the micro mesh. This one was not terribly bad to begin with.

JCinPA said:
Polish it is, then! I won’t wait for the micro mesh. This one was not terribly bad to begin with.
Click to expand...

A piece from an old tee or vest should work as well. I could only do a stain shine not a high gloss so I guess this is where the buffing wheel comes into play…

I have limited experience with stem restoration, but I've always used a low speed, low power buffer. Mine is a converted Dremel Shoe Buffer, using regular buffing wheels. I'm guessing it is much quicker than doing it all by hand and I suspect you get a finish that holds up longer.

Multum in parvo said:
A piece from an old tee or vest should work as well. I could only do a stain shine not a high gloss so I guess this is where the buffing wheel comes into play…
Click to expand...

Dyslexia or autocorrect—> I brought it only to a SATIN shine and not glossy!

Contributor
Ambassador
Reading around on restoration sites, I think I'll wait till the micromesh pads come in first. Most of them polish with the pads, then do the buffing--which for me would be t-**** and cream/toothpaste

Contributor
Ambassador
t-**** was supposed to be t-shirt. Sorry.

I despise cleaning up and polishing stems. To me its the least fun of the entire restoration process haha. The last few I did I tried a different approach. I used a pocket knife blade at a 90 degree angle to gently scrap off the majority of the oxidation. Then a quick wet sand with 600 grit. Lastly I polished with a white or red rouge and added a coat of wax. I use my wood lathe as a polishing wheel on the lowest speed. It worked well and seemed to streamline the process. When doing 5 or 6 stems at a time some of the other methods (that also work well) are very time consuming. There are tons of ways to try out and tinker with

Contributor
Ambassador
I agree with you, and will likely get cotton wheels and clamp my DeWalt corded variable drill in a vise and buff them. But my first ever project, for no reason, really, I wanted to do it by hand. Granted the pipe was in clean condition to begin with, but I just wanted to see what I could do without any tools.

I suspect not all flea market pipes are in awful condition, and I have enough pipes now that I can wait for one and it's good to know how good a job I can do by hand.

JCinPA said:
I agree with you, and will likely get cotton wheels and clamp my DeWalt corded variable drill in a vise and buff them. But my first ever project, for no reason, really, I wanted to do it by hand. Granted the pipe was in clean condition to begin with, but I just wanted to see what I could do without any tools.

I suspect not all flea market pipes are in awful condition, and I have enough pipes now that I can wait for one and it's good to know how good a job I can do by hand.
Click to expand...

. Much depends on the condition on the pipe at the start. I still use the magic eraser on them sometimes haha. Sometimes you get lucky and don't have to do anything to the stem! A true miracle haha

Contributor
Ambassador
Well, it went exactly as I expected. Technically, you can refinish a pipe by hand. But it ain't easy and it's not as good as it could be with buffing wheels. The stem you see here is generously described as satin shine, and it took an hour with the CIF cream and an old t-shirt (spelled it right that time!).

The stummel I waxed with cutting board stuff, a food-grade mineral oil and beeswax and carnauba. Tuns out that works very well, and I think might be just the thing for occasional touchups instead of the olive oil I've read some use. When I get a buffing wheel I'll get after the stem some more and post that up. I also have the pipe waxes coming. And the micromesh pads to get after that char on the rim. Thanks, again, @Whisky for giving me a project to practice on. And it will likely be a nice smoker, too! 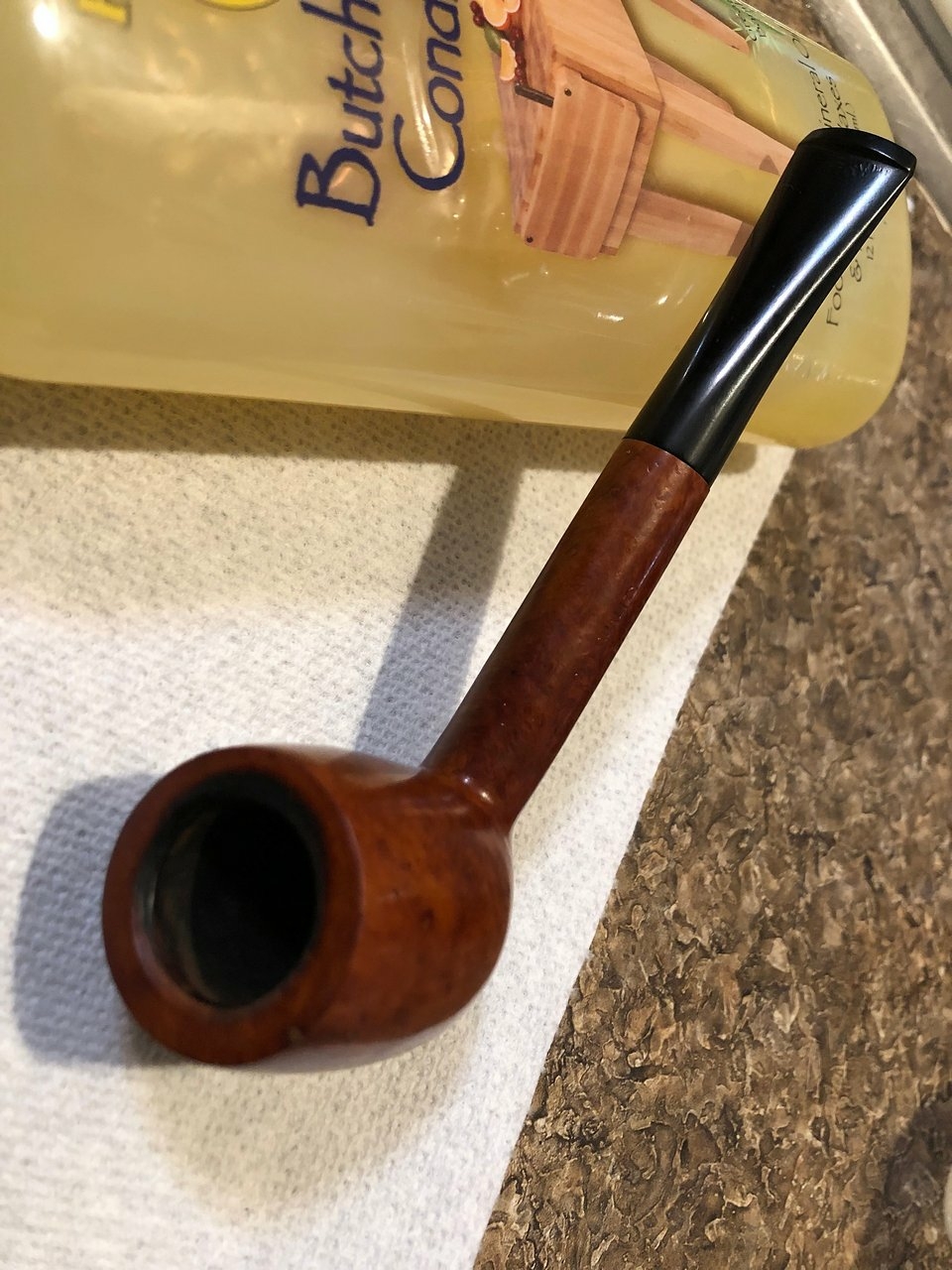 Who has restained a pipe - the whole stummel