Jack Purcells by Converse. What a shame.

Moderator Emeritus
I forgot to mention that the “Made in China” decal is removable. 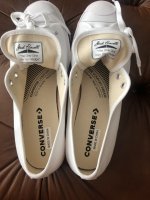 I have three pair of leather Jacks.

Moderator Emeritus
Jack Purcell’s will always be my #1 go-to weekend sneaker. But I’ve never had a pair of Pro Keds... that is until now. 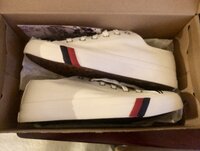 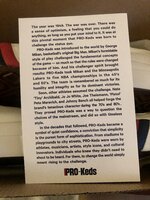 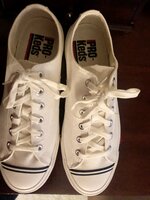 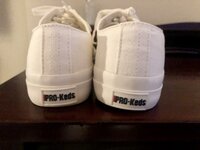 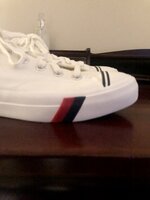 Like the iconic smile that adorns the front of the Jacks, the red-blue stripe on the outsole of the Pro Keds will be recognized by many who grew up with this sneaker during the 60’s & 70’s.

These won’t get a good workout until the weather breaks but after trying them on for a quick walk around the house, they feel like they will be a nice addition to the retro sneaker collection.

Ambassador
Thanks for the comparison and review!!

I ‘grew up’ wearing Jack Purcell’s! Sad to see the quality deteriorate.

These won’t get a good workout until the weather breaks but after trying them on for a quick walk around the house, they feel like they will be a nice addition to the retro sneaker collection.

Moderator Emeritus
Thanks for the photos and write-up, JohnnieGold.

I hate to admit that I was completely unaware of Pro Keds. Were Pro Keds sort of the Lexus to regular Keds Toyota?

Looks like what you have is the Royal. Unlike Jack Purcell's, it looks like Pro Keds came in various styles, such as high tops as well as low tops.

The Knize said:
Thanks for the photos and write-up, JohnnieGold.

I hate to admit that I was completely unaware of Pro Keds. Were Pro Keds sort of the Lexus to regular Keds Toyota?

Looks like what you have is the Royal. Unlike Jack Purcell's, it looks like Pro Keds came in various styles, such as high tops as well as low tops.

IIRC, Keds were historically worn by females (Keds.com only lists sneakers for women) but have since been considered unisex and ProKeds were worn predominantly by the male-market.

Moderator Emeritus
What I remember was as a kid in the late 50s, early 60s, lots of later afternoon TV ads for Keds, and, as I recall, PF Flyers. I think I remember scoring one pair of Keds in that time frame. Otherwise, I am sure it was the then equivalent of Walmart brand. I do not remember Converse until high school. Maybe middle school. When I got any little of my own money put together, I went to Converse, and Levis!

I wore Jack Purcells for many years. About 15 years ago I noticed a marked change in the quality. When I asked a Converse rep about it he said that they started out as an athletic shoe that became a style icon and transitioned into a fashion shoe. Therefore all of the features that gave them their remarkable comfort and quality became superfluous and the look became all important. (also the last has narrowed to make them more "unisex") They've incrementally continued in that direction.
I have a pair of PF Flyers and I'm not particularly pleased. They don't have the structure and support of the old Jacks.

Davidkimberly said:
I have a pair of PF Flyers and I'm not particularly pleased. They don't have the structure and support of the old Jacks.
Click to expand...

A modern version of PF Flyers? I did not know they even existed. I can only imagine what the quality level would be at this point. Even back in the day I think they were sort of the lower cost spread of sneakers. I do not think they had the cache of Keds, much less, Converse.

Moderator Emeritus
By the way, Jack Purcells pre-existed Converse in my consciousness. (I know Coverse was actually around, I just was unaware of them.) All tennis players seemed to wear them, especially real red clay court players. Wikipedia tells me Converse did not take over Purcell until 1972.

Also, I read that Converse took over PF Flyers at some point, too. "Run faster, jump higher" was the old PF Flyers marketing line.

And do not get me wrong, I think the modern PF Flyers look pretty good, and would be a nice retro thing to wear.

It annoys me that Sperry Topsiders no longer look like the Topsiders i wore undergrad, or at least the ones I can easily find do not look like the originals. I have some AE boat shoes in Horween leather that I am sure are of good quality and get the look sort of right, but they just are not the same.

Also, before we get too nostalgic, the Bass Weejuns I wore in the 70s were probably not of great quality. (Nothing as utterly crappy as Bass puts out these days!) The all-leather heels wore out quickly and could easily cause one to break an ankle. The uppers cracked quickly along the outside edges. Not that that kept anyone from wearing them cracks and all. They did take a wonderful and natural looking shine, unlike what I assume is corrected leather that seemed to come in later. I do not know what Weejuns were like in the 50s. In any event, by the 1970s anyway, Weejuns were a shoe on expected to have to replace from time to time.

Converse shoes have not been made in the USA since the company went bankrupt in 2001. Now Converse is owned by Nike and the brand's shoes have been made in different factories in China, India, Vietnam and Indonesia.

Moderator Emeritus
Is it possible that you got a pair that was specifically made to be sold at a discounter? A number of different shoe companies do that--Clarks is one that comes to mind. The shoe you buy at a discounter and the shoe you find at one of their flagship stores is fundamentally different.

The JP’s are more comfortable than the ProKeds. Also I have both in Size 10.5 and the JP provides a better fit where the ProKeds are a bit roomier (but I don’t think the roomier fit would warrant going down a half-size but may warrant wearing socks).
The canvas on the JP’s is softer providing more comfort and the insole provides a tad more cushion than the ProKeds.

Overall, the Jack Purcell gets the nod over the ProKeds in terms of fit and comfort.

The ProKeds are still a good-looking retro sneaker that are more along the line of PF Flyers as a cool, vintage-type sneaker that fall short of the stylish, iconic status that the Jack Purcell enjoys.

I've always liked boat shoes. My feet are as flat as the floor. Boat shoes hurt my feet and back.
Then I reluctantly tried a pair of the newer style.
They are my go-to shoe.
There is more cushion and couture in the sole, and they fit higher up the top of your foot for a more secure fit.
I'll never look back.
You must log in or register to reply here.
Share:
Facebook Twitter Reddit Pinterest Tumblr WhatsApp Email Link
Top