Is it normal to unclog the razor after each stroke?

I have a late 1940s Gillette open-comb, have been using it for a decade. Shortly after I got it, I realised that the cut whiskers clog it so much it doesn't cut well anymore, and I started cleaning it after each stroke (or half strip of lather from top to cheekbone or from there downwards actually, each consisting of a number of smaller strokes going down). I loose the handle/screw, hold the safe ends of the blade and clinker the handle. This works well, but it is a bit annoying, and I wonder how normal or not this is.

If this is an old question, I apologise and will be thankful for links to threads - searching didn't get me far, unfortunately.

I might expect this to happen if shaving a substantial beard growth, or possibly if using an overly dry and thick lather, but it does not seem normal to me and is not something I have ever needed to do despite using many vintage open comb razors.
P

This is the razor, for what it's worth: 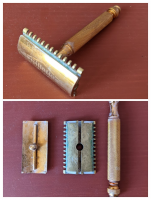 (Yes, I should really clean it thorougly again.)

Yeah, you have to rinse it every few strokes. I rinse mine on about the fourth stroke. It all depends on how heavy your beard growth is.

Chevyguy said:
It all depends on how heavy your beard growth is.
Click to expand...

Yes, it's clearly worse if I hadn't shaved for longer, of course.
Simple rinsing won't do, though, I really have to screw it loose a little and jiggle the blade.

Ambassador
I typically rinse (swishing it in a bowl) after I’ve completed a side of the face/neck. There’s certainly no right or wrong answer — do whatever ensures a smooth and efficient shave.

You might want to take a look at your lather. It sounds like it might be way to thick and heavy. Do you mostly use the same soap? What soaps do you use.

I can't help with that particular razor but I only usually rise mine three times per pass. Nine times max. Of course more will be needed if I haven't shaved for a few days, have too dry of a lather, or am using a brushless cream.

I have both New Short and Long Comb razors and can't say that that I've ever found this to be a problem. Perhaps your lather is a bit on the dry side. I've found over the years that wetter, slicker lathers work better for me. Try a bit more water and see if that helps.

For me I tend to jiggle my razors in the sink after several strokes. And even when using an old Gillette oc on my armpits I do not have to clean it that much.
it could be you have really thick pasty lather a greasy skin or use shave oil.
P

ouchyfoot said:
What soaps do you use.
Click to expand...

Cream at the moment, Trumper's. I had the same problem with Trumper's soap and with Mitchell's Wool Fat soap. But thanks everybody, I'll see if wetter will make a difference!

(To clarify: jiggling the razor won't do; I really have to loosen the blade and jiggle that.)

Patricks said:
Cream at the moment, Trumper's. I had the same problem with Trumper's soap and with Mitchell's Wool Fat soap. But thanks everybody, I'll see if wetter will make a difference!

(To clarify: jiggling the razor won't do; I really have to loosen the blade and jiggle that.)
Click to expand...

I ‘divide’ each pass into six ’sections’ (right cheek, right upper lip + chin, right neck with corresponding sections on the left). I ’flip’ DE sides after each section, then rinse the razor after completing two sections. So, three rinses per pass.

I use plenty of water in my lather and add a few more drops to the lather before each pass.

No clogging problems with this ‘system’ whatever razor I chose!

There's no written rule about how often should a person rinse his razor and it all depends on how much stubble you have, the razor you're using and whatever your lather is very dry or too wet. Some of my razors clog a bit easier compared to others and it also depends on the other factors that i've meationed. I've seen some Youtubers rinsing off their razors after a couple of short strokes, which I find unnecessary, but hey if that works for them i'm all good with that.

In both my NEW (SC & LC), I make strokes until the bugger is full of lather, and figure it's rinse it or have it drop onto the vanity.....even then, it's usually just quick blast of running hot water, and back to the shave. (Or shake in the sink filled with water). You shouldn't need to loosen the razor to rinse out the whiskers/lather.

This was my thought also. You're using a New base from the 30's and a Tech cap from probably the 50's. I haven't checked my caps to see if the dimensions are different but that could be your problem. I know they will work together but how well is the question.
P

Ah! I hadn't even thought it might be a combination. Here is the thing with a blade (and a bit cleaner): 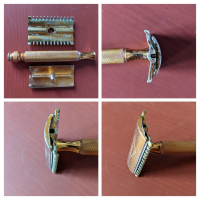 What would I look for if I'd like to replace it? I like the general feel of the weight, and the looks, but I'm not a stickler there, as long as it's a good shave, close enough but not bound to cut me all the time. (I'd say I'm an experienced and reasonably safe shaver, not pressing hard, letting the weight do the work and the like.)

We can guess about it all day long, but if you could post a photo of the razor after one stroke with the lather still on it, that would be much better.

Also a photo of the area to be shaved so we can see how heavy the beard is.

I assume you mean after two strokes, because it’s got two sides to clog up first. But my guess would be not enough water in the lather. Next guess would be that you have a really heavy beard, or a combination of both.

I have a Long. Comb Gillette and don’t have that problem. I use The Fat, but I’m an old fart and my beard is no longer course and heavy.

One last request. Put a blade in the razor and show us the view from the bottom and get as close as your lens will focus. I want to see if I can see the blade through the comb.
P

Shaving will have to wait till tomorrow, I'm afraid , ideally a day or two more, but here are more angles: 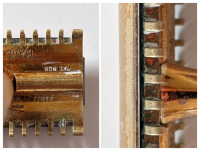 I've used probably a hundred different razors, including many different varieties of open Combs and vintage razors including the one you have. And I've never had to loosen up a razor to clear away the lather / stubble.

While it's true that you may have a parts mismatch, I'll bet the real culprit is a lather that is way too thick. I'll bet the overdense lether is building up under your blade inside the Combs of the razor and not allowing your stubble to make it to the blade edge to be cut. A properly hydrated leather won't do that at all.

Looking at the pictures you've provided, I see no reason why that arrangement wouldn't give you a good cut/shave, even if you should choose not to try to find the right parts. And by the way, sometimes you can get four different Tech and NEW open comb razors for 20 bucks on eBay. And then just pick and choose what you want to put together with.

The good news is that you'll likely really enjoy the increased slickness as you learn to hydrate your lather more.

I could actually go the entire shave without rinsing my Razor if I wanted to. The lather would just drip out of the bottom of the head and down onto the handle and or onto my shirt. The lather is so loose that is kind of self-cleaning. It doesn't build up underneath the razor.

Someone also mentioned pre-shave oils. If you are using something like that, I would discontinue it temporarily at least. They definitely have been known to build up on the blade and brushes. And sometimes they can mask poor lathering skills.

Trumpers doesn't have great performance, Imo, but it will give you enough slickness to do the job well.

A lot of YouTube shavers use lathers that I would consider to be to dry. To see what a lather looks like that is highly hydrated, you can check out my own YouTube channel, because that's usually what I'm chasing when I mix up my own lathers in a bowl.

Now, I'm not saying that you should have the same hydration in your ladders that I do. Everybody gets to choose that for themselves. But seeing it might help you to know more about the spectrum of possibilities.

(Recorded this on my mobile through voice dictation. Please forgive incorrect grammar or capitalization or maybe when it might have chosen the wrong word)