Is anyone else's shave map complicated?

Seems like all of the people I watch shave on YT have very simple faces, growth direction wise. Mapped out my face again (I like to do this quarterly to see if I've made any mistakes) and yup... It's still complicated. Moustache grows towards ears on the ends, cheek grow inwards slightly, have a swirl on my neck and so on. Just looking to see how many people have the same issues as me. 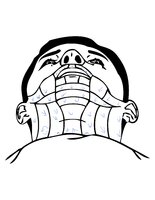 Please note that advanced shaving skills are not required to have a YouTube channel.

Yeah I think a lot of us have complicated growth patterns well worth taking into account.

The growth pattern on the right and left sides of my head are completely different, and a good part of my neck has the hair growing west to east, while the cheeks are more north to south.

Yeah, mine is also complicated. My cheeks are very patchy but what does grow does so diagonally towards my ears. Coming off the sides of my chin is pretty much completely horizontal so it's annoying to shave that WTG since it's on my jawline. The center of my neck starts off going down and then switches to up, and the sides of my neck also go horizontal. I can't say about my mustache since I haven't shaved it since it started growing in halfway decent, years ago. Honestly sometimes I just ignore my grain pattern, especially on my neck because trying to shave it horizontally is not easy. I have to wonder if some of the YT people just ignore their complications as well lol.

My shave map is layered.

By this I mean it is not strictly all one direction in any given area. I could do a "with the grain" (or seemingly so) pass, then feel for grain. It would seem fairly simple. However, if I shaved directly against that grain flow and felt again, there will in many places be a secondary grain pattern felt, differing from the first one by anywhere between 30 and 90 degrees. As such, I always need at least three passes for a perfectly smooth shave... although I don't chase that a lot of the time, and just settle for two (or even one) pass.

Also, that secondary grain is inconsistent. It isn't always exactly the same lay every time. If I'm shaving for a formal event (or simply want to chase the perfect shave), I'll often do a regular shave an hour or so before I need to get ready, then allow the skin to settle back down before doing the "seek and destroy" touch up work. Allowing the skin to settle back down for an hour, makes it easier to find the lay of the land on that day for the fine tuning.
You must log in or register to reply here.
Share:
Facebook Twitter Reddit Pinterest Tumblr WhatsApp Email Link
Top