Looking at some modern Mont Blanc inks, I ran across this palette: 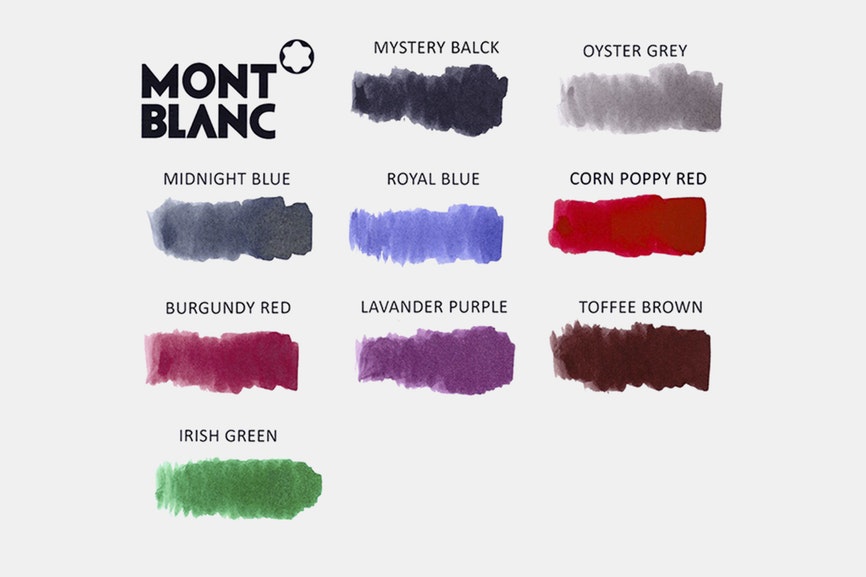 I’d love some feedback on the Mont Blanc inks. It’s all I know in addition to some Disposable inserts, made by Jinhao. I have not really used the Jinhao inserts much.

Moderator
Midnight is what Montblanc replaced the blue-black with but the '90s stuff had iron gall and is permanent. The royal blue hasn't changed much since then. Their old inks were made in Germany, now they're from Austria. Regardless of when and where made, Montblanc inks are pretty much top shelf, behave well on paper and don't clog the pens so go ahead and use it.

We're talking bottles, right? If what you have is in cartridges some may have evaporated.

I have some of the Montblanc Midnight Blue, but in the no longer made iron gall variety, so if you buy a more modern version, some of this may not apply.

If I were to identify any fountain pen inks as "dry", this would be one of them. I don't know if I can recall every pen that I tried it in, but I ended up not caring for the performance in any of them, and that included one actual Montblanc, a Noblesse from the late 1970s. It is water resistant (but again, that's the iron gall version). As for the color, some people like a blue-black that looks more black when it dries; personally, I prefer one that dries to a subdued dark blue. The Midnight Blue is more blackish. The big positive is the Montblanc bottle. I keep thinking I ought to empty it out, clean it, and fill it with one of my Pilot inks. Really a nice design.

I've gotten some cartridges of the Royal Blue and the Irish Green, and think that they are very nice colors; they both have written well enough in a couple of my Kaweco pens. They are not water resistant, which is something I generally want, but which other people don't necessarily care about.

Whether you end up liking these inks or not, as Nemo said, it's a good brand, and nothing to worry about. Except, again, if you have a iron-gall version, you may not want to leave it in a pen for a long time unused.

The Mont Blanc ink I have is in a bottle. The ink I’m looking at is in the same type of bottle, but I’d like to begin to look at pricing. Goldspot, ipen, and a store in DC, Fahrney’s are the online sources I know about. The store I used to visit in Dallas is still there, but I’m unfamiliar with the name or selection.

Montblanc inks are generally good performers and the traditional boot shaped bottle is convenient to use.

The limited edition inks, normally in 30ml bottles, are expensive at $/ml, but they usually sell out very quickly and fetch even higher prices six months later on auction sites, crazy world.

Personally I avoid the permanent range of MB inks because they are usually more expensive than standard and I dont need ink to be that permanent.

I only know of one problem with MB inks. A few years ago MB produced the Lavendar Purple which tended to seperate in the bottle, gloopy hello at the bottom and clear liquid above. In my case it also block a pen. MB tried to recall all the faulty inks and have now reissued, this was around 2012. If you see MB Lavendar on sale just check that the ink is within its use by date.


I like MB inks and the Corn Poppy Red just pops off the page, pun intended, but others who are more expert than I rate other brands ahead of MB, especially some of the Sailor and Pilot inks. Some retailers offer an ink comparison service on line, if you Google The Writing Desk Ink comparison, you will see what I mean. A good color comparison although it doesnt tell you how the ink works in the pen.

The prices of Diamine inks are attractive and they have a huge range of colors, my own experience of this makers is that their reds, blues and purples (the only ones I have tried) can stain the plastics of pens and cartridges. This pic is of two cartridges, the near clear cartridge has had Visconti Black, the Sheaffer cartridge has been refilled with Diamine Grape, not such a problem with a cartridge, a bigger problem on a clear pen or one with an ink view window. I had a problem with an MB 146, when I presented the pen to the MB Boutique, the first question I was asked was have I been using any other make of ink apart from MB, I hadnt. When I asked TWSBI for help on the staining and the sticking piston they refused help on the basis that I had been using Diamine ink. 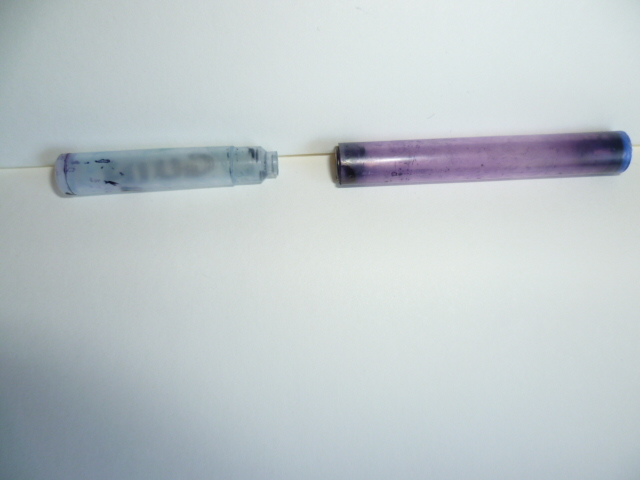 That has a lot to do with my questions. I’ve only done a couple of massdrops, but the ones I have done have been benificial.
You must log in or register to reply here.

How adventurous are you with inks?
2 3

What is Your Ink Inventory?