It has been a struggle, but I have come to accept that I have a straight razor collection and I want to keep it. Originally, I thought I just was into honing these and that I'd find homes for them all after figuring out which I liked best. Turns out I enjoy the variety and they're cool objects. Came as a surprise, I'm a bit of a minimalist and had never felt inspired to collect anything before, woo, new type of fun.

So now I want to have a couple dozen razors stropped and ready to go but not worry if I don't use one for a few months. I'm in Toronto so we have quite humid summers. I have AC on for the worst of it and the furnace keeps it dry in the winter, but I also like to have the windows open in between. As a result, humidity varies as does temperature--though pretty limited to a comfortable range between 19-25C. My stash of future honing projects I currently keep sealed away with some silica packs and I use the microwave to dry those out after letting things breathe a bit when temperature drops as I have a vague sense about things like condensation and relative humidity.

But for my active rotation I oil all but the half dozen or so I'm most likely to use and those I keep out in the open so hopefully no moisture concentrates in their vicinity. I'd rather not have to hesitate to use an oiled one or worry about not having used a non-oiled one in a while. Silicone sleeves come up a fair bit here and sound like an appealing solution. They seem kind of fiddly though, I don't want to have tediously pull them in and out of little bags. So I'm contemplating slicing a gun sock lengthwise and clipping it onto a shelf so I can fold it over a couple dozen razors at once. That way I can still peruse my collection and, bonus, it keeps the dust off. But I have ...questions.

Will this actually work? Anyone doing something along these lines?
It seems to make sense, but is there something escaping me as to why resting between two flaps of the material will be less effective than being in a little baggie? Maybe someone has attempted this and can comment on its efficacy?

How does this work?
Somewhere I read that the sleeve wicks moisture away from the interior. Does that mean it's directional eg. if I turn this inside out will it concentrate moisture? What's the mechanism behind this, anyone have a source? Seems pretty impressive for how inexpensive the material is. Or is it a more modest situation where all that's really happening is the silicone blocks the fibres from retaining moisture so it better allows the protected item to stay at the current relative humidity? So then is it really even better than having them out in the open?

Is it going to mess with scales?
I see a few threads (1, 2, 3, 4) that indicate there is some oiliness that can transfer from the material to the razor. And that it darkens wood, changes bone translucent, etc. Those sound like what oil does to those materials, but maybe it's the silicone itself? Perhaps a little (open!) plastic sleeve around such porous materials will be a good compromise?

Will I eventually need to replace it or does it work indefinitely?
This thread speaks of recharging them. Is that just from it leeching into razors and whatever it's sitting on, or does it evaporate into the air as well? If I need to replace it every couple years, I'll probably put less effort into eg. finishing the edges of the fabric where I cut it.

Does it matter which one I get?
Are they all pretty much equivalent? Some said theirs were more dry and didn't transfer material to razors, which sounds like a plus unless that's means there is less silicone, the active ingredient, and not doing that is an indication it's already past its useful life? I'm considering this one as it comes in a variety of sizes and is available inexpensively in Canada:

Have you looked at VCI paper? 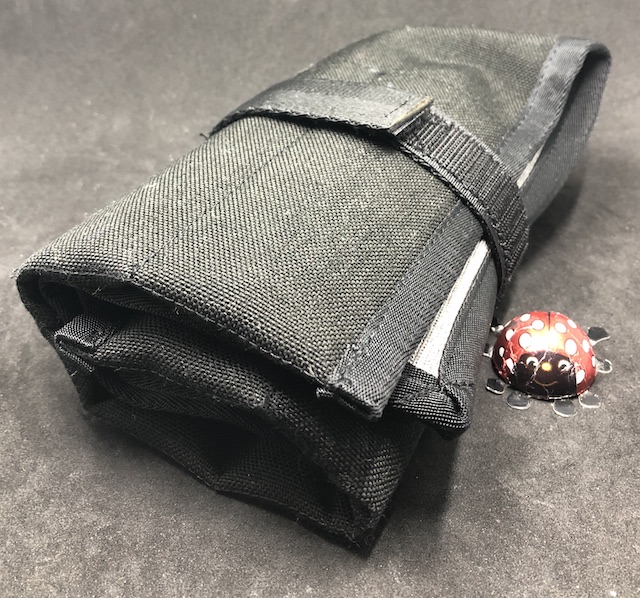 I also have a dozen of the small silicon sleeves which are sold by Jarrod at Superior Shave.

I've discussed the relative merits of both with Jarrod. I've been very pleased with both, and see no downsides to either.

Where I live it's very humid. Where Jarrod lives it might be more humid. Read his write ups on the products and trust what he says.

That's all I know about them.

They dried out my ivory (don’t have bone), but no issue with any other razors. My humidity and summer heat is higher than yours. I find them to be a good option.

been using them for years without a problem

Started thinking about this again. Glad to know the sleeves work well for you guys, but does anyone have a sense of how they work? And if this gun-sock-in-half-clipped-to-a-shelf notion is a reasonable one?

Thanks for the VCI Paper idea @bluesman 7 , I've encountered it before and hadn't realised, now I've been seeing it around in packaging and such. But it doesn't seem like a reusable solution and it apparently has a shortish shelf life even when sealed:

Zerust®/Excor® carries and produces a wide range of VCI papers that offer corrosion protection for metal parts in shipping and storage.

I use knife rolls from amazon. silicon treated. They don't fit razors perfectly but I just fold the top over and its fine. No problems, no rust, no scale damage

I use VCI paper, works very well. I put pieces of a cut up sheet into a drawer, change it once a year. I have razors in open coffee cans too, I keep some VCI strips in the bottom.

Gamma said:
I put pieces of a cut up sheet into a drawer, change it once a year.
Click to expand...

Interesting! I'd not realised it'd work well in an unsealed environment, that sounds a lot better than my current sealed-box-with-dessicant because they won't get any trapped moisture with the changing temperature. Do you buy it new every year due to the low shelf life or do you keep some sealed for future years?

Part of what I like about straights though is the lack of consumables. Will the silicone sleeves work as well in 10 years as they do now or do they become less effective over time? That's part of why I want to understand the mechanism.

Shelf life is a lot longer than imagined. If the box is sealed, really sealed, like my batch is wrapped in many layers of seamless poly wrap inside the outer box, it will last a long time. On arrival it comes in a basic cardboard box so the lifespan would be less there but still longer than the spec because it's not out/open and in use daily. I've had 5-6 yr old VCI from S&W that was still extremely potent; was stored in double zip lock bags.
I go through it fairly quickly so I don't have a concern. It is easy to get so any qualms of potency could be laid to rest by just buying a new pack yearly or every other year. The open containers here get fresh paper every year but I am not convinced that I need to do it. The product is cheap enough where it doesn't matter to me. As always, environment is a major concern so testing is probably the best way to go about choosing what works.

The silicone PJs/socks work extremely well. Bone scales might turn translucent when coming into contact with silicone. Plastics, wood, rubber, horn, etc... don't seem to be effected. I don't have any ivory scales. So, I can't speak to how it might effect ivory.
X

I live in very humid weather; I have to dry then mineral oil all blades. The ones not in use go into a zip loc bag and then into Tupperware cases. That is the only way they will survive.

Is there an easy way to test this?

I use VCI paper all the time and I've never seen corrosion where I've used it, but I don't know that I would have had corrosion had I not used it either.

bluesman 7 said:
Is there an easy way to test this?
Click to expand...

As VCI depletes its active ingredients via outgassing, the amount of residue left on the inside of, say, a zip lock bag it is stored in also diminishes. Changing to a new bag can show whether or not it's still usable. If I was to pull out my current stash, you'd see the inner wrapping, a heavy gauge plastic wrap, is all yellowed and now translucent instead of clear.
When the paper is done being useful, it will no longer outgass like that. Dead VCI leaves no residue.
So - is that an easy tell? - not really. But it's what I've observed over the years. I don't recommend buying 5 yr old VCI, but I got a deal on some many years ago and I had no issues with it. A lot would depend on how it was stored, etc.
N

I’m a huge VCI fan, too. My mechanics tools and some woodworking tools are in boxes lined with VCI foam drawer liners, and the excess VCI foam is cut into blankets that draped over each compartment or drawer when it’ll be sealed for a while. In the tool chest the off gassing slows after about 18-24months, but my wooden handtools chest is darn near airtight and it’s at a few years and going strong.

I don’t do any VCI for razors, just a cigar box with desiccant inside... I’m concerned if I got too high quality on my storage, my collection would multiply like rabbits!
You must log in or register to reply here.

Acidity of wood for scales