I resurrected my Seiko Black Monster

I wanted to share something other than a "What Watch are you Wearing Today" photo or similar. I bought an original SKX779 Black Monster at a Seiko outlet store outside of Dallas back in 2006 as a gift to myself on a recent promotion at work and wore it daily on either the bracelet, rubber strap, or NATO. It was scratched and abused (just like my 51 yr old body), but was a constant companion with sentimental value. That was until 3 years ago, when I accidentally dropped it 6 feet from a gym locker onto a marble floor and destroyed the movement. I got several repair quotes, thought about it, and before I could get it repaired bought a Seiko Pepsi Solar Chrono Diver (that's a great watch as well) ahead of a trip overseas. I had nearly forgotten the Monster until I ran across it in a drawer about a month ago. In one of those "what's the worst that can happen" moments, I decided to attempt the repair myself despite never having done any watch repair other than replacing a battery on a quartz watch. I sourced a refurbished and calibrated 7s26 movement with the appropriate date ring from a shop in the Philippines for $30 on eBay, and found several helpful instructional videos on YouTube.

I received the movement yesterday and brought the Monster back to life last night. I didn't have specialized watch repair tools, but am equipped with enough similar tools to make it work. The work was not difficult - tedious is more accurate. It took some time and patience to get the very fragile hands on the spindle where the second hand would rotate cleanly without hanging up on the minute hand. Unfortunately, my clumsiness knocked out a section of lume on the minute hand (I had no idea it wasn't painted onto a solid surface instead of just filling a skeleton frame), but the end result of a half-solid minute hand similar to an Omega actually looks pretty good IMHO. If I had experience, I probably could have done this in about 10 minutes, but it ended up taking me about an hour. Overall, a great experience and only $30 to bring it back to life. 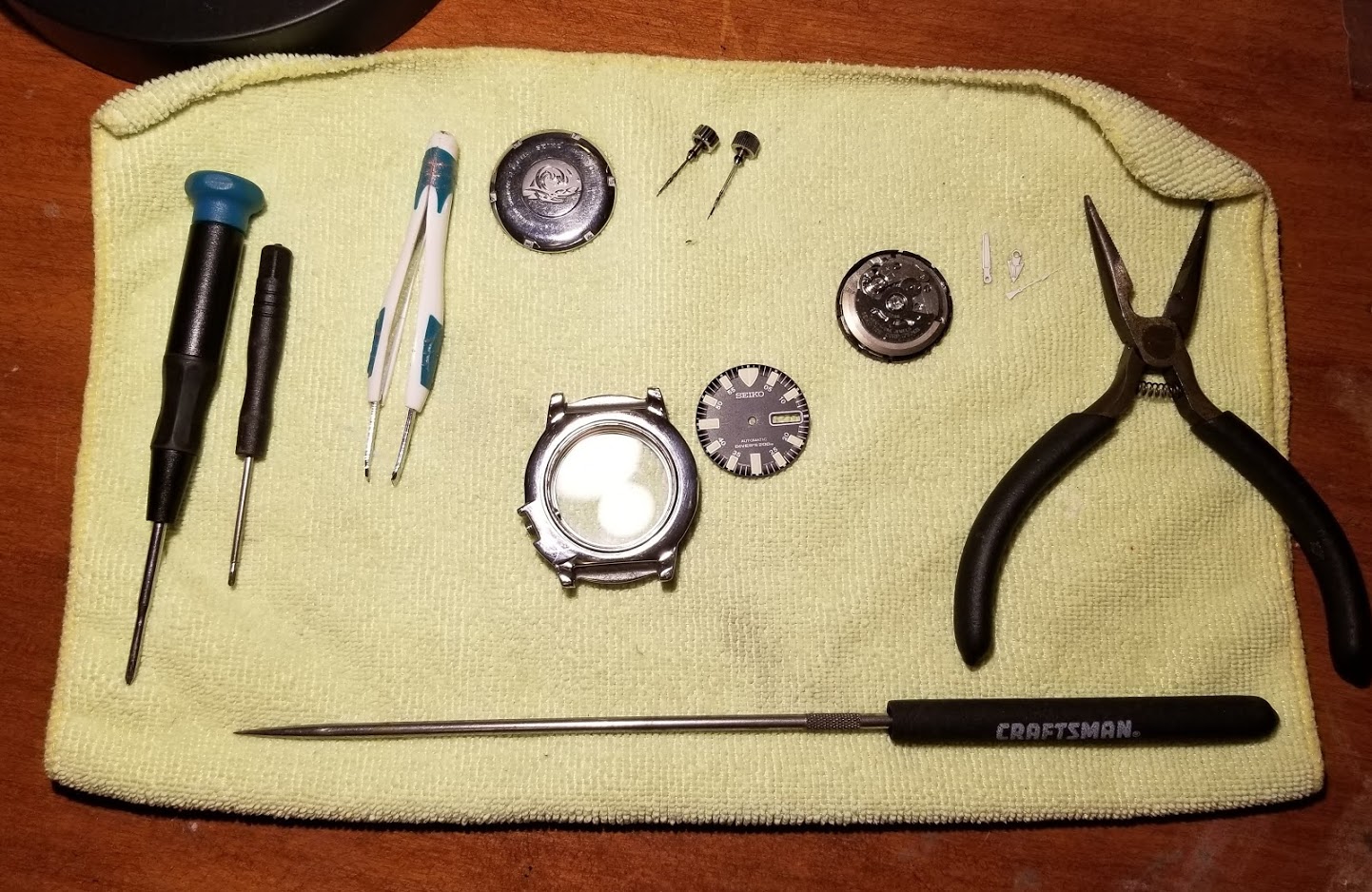 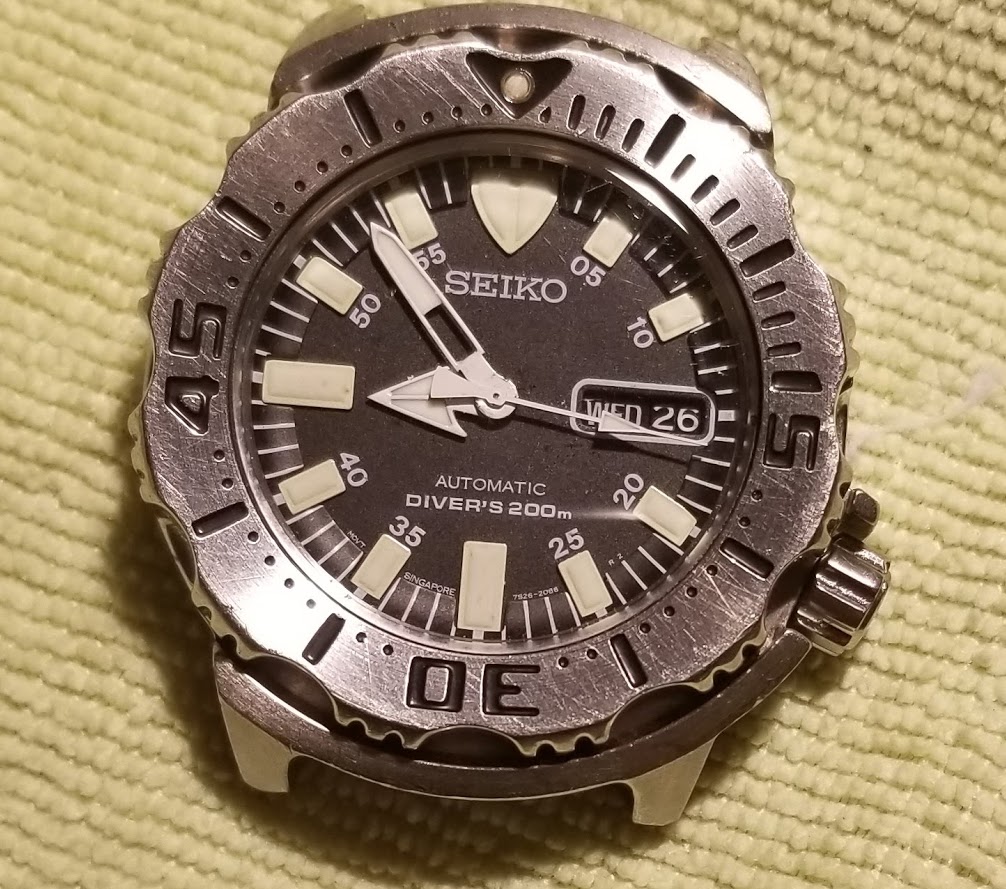 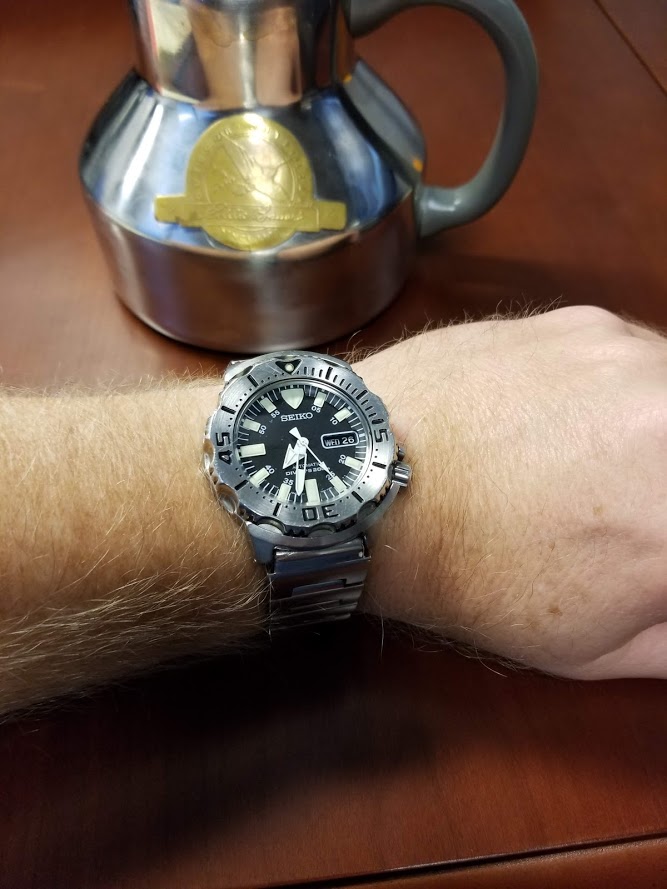 Well done, you must find it very satisfying to have brought the Black Monster back to life.

Very nice. I have a special place in my heart for Monsters, very unique dive watches. They are worth quite a bit these days especially first generations.

OldSkoolMillennial said:
Very nice. I have a special place in my heart for Monsters, very unique dive watches. They are worth quite a bit these days especially first generations.
Click to expand...

Agreed. This one has a lot of sentimental value so it's not leaving my small little collection. I've always loved the Monster look and feel.

Well done! You proved that it never hurts to try new things!

I'll send you mine to repair

ajkel64 said:
Well done, you must find it very satisfying to have brought the Black Monster back to life.
Click to expand...

Thank you. As you can tell from the close-up pic, the watch has been beat to hell, but all those scratches and scars are mine. That means something to me. There's a lot of memories with this watch.
M

I have no idea why, but all the old Seiko parts seem to come out of the Philippines. I have an early '80s quartz diver that I wanted to replace the o-rings (back and crown) and the bezel insert. They all came out of there.

mtnredhed said:
I have no idea why, but all the old Seiko parts seem to come out of the Philippines. I have an early '80s quartz diver that I wanted to replace the o-rings (back and crown) and the bezel insert. They all came out of there.

This was a refurbished 7s26 movement originally made in Japan. It was repaired and calibrated by a watch repair shop in the Philippines and put on eBay for sale. True to his word, it was in perfect condition and is spot on for timekeeping 2 days in.
C

I wear a Monster everyday.

There is something about the Philippines and Seiko watches. When I bought a second generation Monster soon after it was released, most of the real world photos I found by searching had been posted on a Philippine specific watch forum. Including some of the orange and black combinations that I had not seen anywhere else up until that point.

Nice to see your black monster back in service. And hear that the refurbished movement is keeping time.
You must log in or register to reply here.

Straight razors quickly become blunt, the steel is too soft, where is the manufacturing defect?
2