I am getting my last Magazine Repeating Razor Co. Razor a Type A

well i am now getting what i think is my last Repeater... a Type A. i have all 3 variants of the Type C and one of the Type B. i also have a bunch of NOS blades magazines for these razors from a relative of Col. Schick himself. of all of mine are really "user grade", and i use them, but this last one on the way is the most suspect of all. i wrote to the seller and asked for another picture and asked a couple of simple questions.... no response. the lowered the asking price 10 days later and in asked again.... still no response. no one was trying to buy it and they lowered the price one more time today. i decided to make an offer, and again asked some questions in the comments of the offer, but they accepted my offer, so it is now on the way for $25 plus a little for shipping. the seller was quick enough on the offer, and actually very quick on shipping. i just hope it is not beyond use. i will post pictures when i get it and see what it is that i bought.

here are some of my other early Schicks, i am looking forward to getting the earliest model.

Here hoping it is worth the gamble!

Contributor
For $25, the gamble could be much worse! I love the repeaters, but only have a replated B. I haven't ventured further, mostly because I can't get a close shave with the B. All of my other Schicks, from early E2 to L, work fine (although the later versions require a twin blade).

i got my Type A Schick Repeating Razor you can see that it is kind of rough on the outside, but i think that most of it is aluminum and maybe i can just polish it. 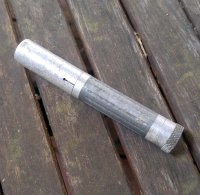 when i opened it up i found that it had a blade still in the razor, but i also could see that the bar guard looks straight, so far so good. 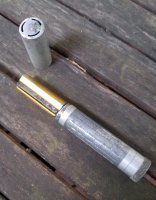 the head rotates and seems to be ok. and the screw on the back is not badly damaged.

when i opened it up i found the sprig stuffed in their sideways and backward, but it was all there.

i also found a lose blade, but no carrier. however that is not a problem for me since i have so many NOS magazines for this razor... i had a spare empty carrier and loaded the single blade and everything functioned fine. 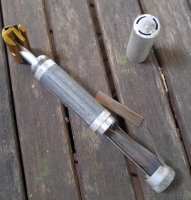 well my repeated request for pictures of the opened action may have been ignored because it looked like it might all be broken, but it turns out that it will all work just fine. actually it loaded the blade quite smoothly. i don't think i will hurt it much to really take some polish to it, it is not like the newer ones with a thin layer of gold with lacquer in top, however at it is it looks like a real tool... the head is not corroded and would also work fine.

over all i would say that the risk paid off, for $25 i got a Type A that will be fine as an actual shave capable user grade razor. i will try some polish and see if i can make it look nicer, but i now can shave with Type A-B-C-C-C.

Wow. I don't know what I'm looking at but find it impresses me.

ok i got it cleaned up a bit, it has some pitting, but it all works fine. this looks as good as many that cost much more on ebay, and for what i wanted this is just right. i am not particularly a collector, i just like using these technologies form the past. have loaded it up with 20 vintage blades and have been using it for the past couple of days. the old blades tug a bit, but can get the job done, and i suspect this is how it would be back in the 20s when these were being made.
here are some pictures after some cleaning and polishing. 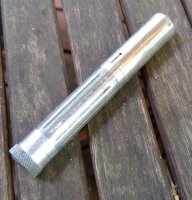 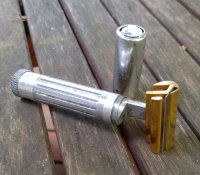 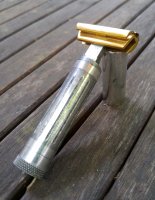 Contributor
Well found and Well Done... great to have the collection complete.
You must log in or register to reply here.