How To Use a Pasted Balsa Strop

Has always felt comfortable to me.

Slash McCoy said:
It is sort of a sweet spot, I think. From .5u to .25u seem to be a sour spot somehow. Takes extra effort to make that level of edge shave comfortably. Then at .1u it just seems to smooth out, even with no "tricks" to make it feel smooth. It just is.
Click to expand...

I think this is born out by the experience of others not using balsa. My experience with lapping film is that 1u and .5 are nice smooth edges. Once I go down to .3u film the edges, while certainly not sour aren’t as sweet as the 1u and .5u. Once I backed down to .1 balsa the shave smoothed out.

Gamma’s original paste progression goes from .2u down to sub.1u- the last one being specifically a “smoothing” agent.

I’m thinking .1u is going to be my stopping point. At least for now. Have you ever tried .1u without finishing with leather. I’ve become so habitual, I never remember to not strop.

steveclarkus said:
I’m thinking .1u is going to be my stopping point. At least for now. Have you ever tried .1u without finishing with leather. I’ve become so habitual, I never remember to not strop.
Click to expand...

I never had, but that would be interesting.

Not expecting anything good but just curious.

steveclarkus said:
Not expecting anything good but just curious.
Click to expand...

My guess too. But if you didn’t notice the difference, that would really be something!

It would be awful. I have this magic strop I’m terribly fond of.

Sure, you will notice the difference, but you can indeed shave with a good Method edge, without benefit of stropping on hanging leather. It is just better to go ahead and strop.

Slash McCoy said:
Sure, you will notice the difference, but you can indeed shave with a good Method edge, without benefit of stropping on hanging leather. It is just better to go ahead and strop.
Click to expand...

I've been using the same edge since I started and am getting curious about what actions produce what results. Today I did three or four hundred laps on a .1u balsa. Tomorrow, I'll see what "over honing" does. Just simple things like that. I did about an hour on a cnat and result was meh. Will do the 12K Nani next. I believe I'm spoiled already though. When I get a less than great edge, I need to have some reference points to have an idea of where I might have gone wrong.

Excessive laps on .1u didn’t do anything noticeable. I guess when you hit .1.
Vice took the bend out of the GD so it’s corrected back to the usual odd geometry.

So called over honing is a very real thing, usually, but it requires significant pressure, more than the weight of the razor. Balsa stropping, and finish honing for that matter, should use less pressure than the weight of the razor which minimizes edge flex. This not only does a pretty good job of preventing wire edge, but in many cases even removes it. Other refinements such as pull strokes help, too. And so, coming from a Method background, you should not see any bad effects from excessive honing on the 12k or 1u film or balsa. OTOH, probably no improvement, either. Honed is honed.

Yep. Honed is honed. One less concern. I believe I’ll hone the now straightend GD on stones to see how that goes.

Just to say that the 100+ years old Sheffield steel in this Joseph Rodgers responded really well to the pasted balsa strop. 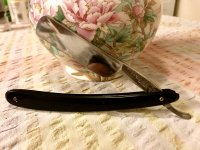 That my man is a darling girl!

Contributor
Today was time for my weekly pasted balsa touch up for my rotation razors. When I started straights in April I was a bit nervous about the perceived effort needed to maintain a shaving edge. The pasted balsa makes it so easy to always have a fresh, sharp edge. I'm surprised how easy it is and astounded at how sharp the edges are.

Some of my razors were sharpened relatively recently, but some last felt a stone back in May. With this method I can keep everything super sharp with next to no effort. It's almost like magic.

I want to give a special thanks to @Slash McCoy and a shout-out to everyone that has helped develop and promote this great maintenance technique.
S

All 5 of my straights are now super sharp using “the method”. 2 of them I set the bevel with the burr method and then used lapping film to 3u and then diamond balsa progression as outlined by Slash. The other 3 had been recently honed by a honemeister and after multiple shaves I put them through the pasted balsa progression. Now all 5 blades are super sharp and my straight shaves have become extremely enjoyable. This was my first attempt at honing and I was nervous to try, however, “the method” is super easy and inexpensive. The best part is that I am now totally self sufficient with my straights!!

Contributor
This is one of those questions where the answer may not impact anything in the real world, but I've still got to ask.

What "officially" constitutes "The Method"? From my observation watching as it has evolved, it would seem to include sharpening using film and finishing and maintaining with pasted balsa.

I don't ask to start a debate or draw lines between people on this forum. I think my motivation is to know if I personally am or am not following the method so that I don't inadvertently mislead anyone when I discuss my experience and or chosen methodology.

RumpleBearskin said:
This is one of those questions where the answer may not impact anything in the real world, but I've still got to ask.

What "officially" constitutes "The Method"? From my observation watching as it has evolved, it would seem to include sharpening using film and finishing and maintaining with pasted balsa.

I don't ask to start a debate or draw lines between people on this forum. I think my motivation is to know if I personally am or am not following the method so that I don't inadvertently mislead anyone when I discuss my experience and or chosen methodology.

HAHA Okay we are kind of making this up as we go. The basic idea is to have a complete method that is very inexpensive and relatively simple, that a beginner can use to very early in the process, begin turning out better than typical professional edges on his razors. So basically The Method is setting the bevel using the burr method (straightforward, minimal subjectivity, no experience required) on either film or sandpaper glued to a plate or a bevel setting stone, then midrange work on lapping film, then finishing on pasted balsa. I recommend that you begin this way. However, once you are getting amazing edges, you should of course feel free to venture off wherever your curiosity takes you. If you can't make a particular thing work, you can always revert back to Method honing. The thing is, The Method gives you a cheap way to make an edge that is consistent and requires no great amount of guesswork. It just works. And it just works pretty darn good. There are other ways to get an edge. This way is hard to beat, yeah, but you might find another that you feel is more enjoyable.

As for finishing a method edge on a stone, well, coming from 1u film there aren't many stones that will cut any finer. Some will sort of soften an edge, making it more comfortable, in return for some small loss of sheer cutting power. I dare say a Shapton 20k would slightly increase sharpness, properly used. A very well burnished and I mean extremely well burnished and scrupulously flat arkie or other quartz based stone, possibly in skilled and caring hands might improve a 1u film edge. (but not a .3u film edge!) and some guys are really proud of their Jnats though I have never shaved with a Jnat edge that was sharper than a 1u film edge. So I have to ask, what is the objective of finishing with the stone?

Now if you look at balsa finishing, keep in mind that .1u diamond is approximately 200k grit. Yes, 200,000 grit. And the diamond particles are buried in the balsa with just tips of crystals sticking proud of the surface. .5u and .25u diamond both have a reputation, partially or actually mostly deserved, for leaving an uncomfortable edge. I am not exactly sure of the mechanism involved here. However, moving on to .1u tames the edge, makes it feel very smooth on the face. So you get a fairly comfortable edge that is astonishingly sharp. I don't see how you can achieve that edge quality with a stone of any type. You CAN have a lot of fun with stones, particularly naturals. Sort of like why don't we just go get electrolysis hair removal, and never have to shave again. Guys like their rocks. They are fascinating, and I think getting the best possible results from slurried naturals can be a great dragon to chase. You always know you can get it just a little bit better next time. A Method edge is the result of a plateau. When you master the use of feather light pressure on properly prepared balsa, you have reached the end of the journey. Going finer grit doesn't seem to work very well. I tried some 25nm (0.025 micron!) diamond slurry a while back. Takes a tremendous and painstaking effort to max out this grit, and the edge looks fantastic in the microscope, but the bevel sticks to the skin and the shave goes out of the comfort zone that you have with the .1u diamond on balsa. That is my experience, anyway and possibly I just didn't see the way to do it better.

So with some methodologies, the end justifies the means. In others, it doesn't, but the means themselves justify the means. And that is probably where you would find stone finishing of a lapping film edge, if it turns out that after trying balsa and stone, you prefer stone.

“The Method” was recently coined as such by @Slash McCoy recently and encompasses film and diamond pasted balsa as a sure fire simple and inexpensive way to hone a blade to super sharpness. I assume that when you hone partially with stones you are outside “The Method” but it isn’t sinful to use whatever parts that suit you. “The Method” is a way to a successful end when followed precisely. It is a way to learn to hone and the skills are, of course, to other methods to achieve a similar end. By using “The Method” I can use stones now. This is my take on it anyway.
You must log in or register to reply here.
Share:
Facebook Twitter Reddit Pinterest Tumblr WhatsApp Email Link
Top