I know this will have a lot of answers and opinions. the question in itself is highly subjective.

I was thinking the other evening that over time.......and with my learning about restoring, honing, fixing, collecting, etc. my perceptions and thoughts about this have changed.

just curious about other's thoughts and opinions about this. let's keep this gentlemanly discussion civil please.

camoloc said:
I know this will have a lot of answers and opinions. the question in itself is highly subjective.

I was thinking the other evening that over time.......and with my learning about restoring, honing, fixing, collecting, etc. my perceptions and thoughts about this have changed.

just curious about other's thoughts and opinions about this. let's keep this gentlemanly discussion civil please.

guess i should also add that my value on things has drastically changed since my early beginnings. what I would have shook my head at starting out may not have the same effect now.

How much ya got?

What ever is more than you can part with. I don’t think I’ve seen one that was priced way out of its class.

Now, if it’s a Pakistani blade, probably any amount is too much.

Sweet spot $400 or less. Too much, over $600. Want to value artisans time and efforts, but after a while there just razors.

Sent from my KB2007 using Tapatalk

Well Camo that is a interesting question, I bought a Shavette recently just to see if I could shave & enjoy a single edge straight and went with the AC style blades. For a beginner I got to use my brand new Kai Protouch blades and a Kai style shavette for around $40.00 Canadian or $31 US to experiment with. It sure is a challenging way to shave but with the Protouch or Proguard blades it can be a additional way to learn straight razor shaving & enjoyment. I think a good quality used Straight razor should run around $100 US or less & a new one $200 + it seems.
I'm just going by buy sell and trade on this forum and some of the online shaving stores.
Last edited: Feb 19, 2021

Moderator Emeritus
My most expensive razor is one I bought just over 2 years ago, with working 12 days straight and 2 days off for 6 months. 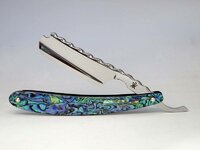 Ice-Man said:
My most expensive razor is one I bought just over 2 years ago, with working 12 days straight and 2 days off for 6 months.

deservedly a reward for time out in.

Over the past year and a half, since I got into SR shaving, my SR's have cost me from USD 8 to 280 each. That being said, my total "investment" in SR gear is less that 0.1% of my net worth.

None of my "expensive" SR's shave/hone better than my lower to mid-range SR's so now I am reluctant to spend more than about USD 200 on one and then it would only be for aesthetic reasons.
M

It's an interesting question when we're talking about 200+ year old pieces of history which are still perfectly usable and probably won't depreciate in value.

Moderator Emeritus
Too much is if you cant afford it.

What ever SWMBO lets me (or I can sneak in, but she checks all the credit card items.) If this wasn't the case I'd say $200.
F

When I started using a DE four years ago, I had sticker shock when I saw the prices of the "artisan" stainless steel razors. Now they seem inexpensive. BTW, I own an inexpensive Game Changer and love it. I love owning really well designed tools that are affordable to the masses. I would love to know what a Filarmonica 14 cost back in the day in current US dollars.

When I started using a straight five months ago and I learned what people pay for NOS Filarmonicas, I thought they were mentally ill, now I get it.

That said, there is something to be said for the thrill of buying a great razor and not getting taken to the cleaners.

I have a new Dovo Bergischer Lowe that I paid less than $200 for that I am really enjoying that feels like the sweet spot to me. If anything happened to it, I would not be happy, but I could replace it.

I'm willing to put more money into a straight razor than a DE razor.

Down the line once I "hone in" (pun intended) what my blade size/grind preference is, I plan on going all in and getting a custom piece done.

DE I consider my toys. Straights are tools, and tools are worth putting money into in my opinion. For me, I'm willing to put in 200-350. Probably no more than that.
2

Great question. I am only 5 months in and somehow have accumulated 20 razors. I think the average price is about $35. I keep telling myself it is to get the honing practice, but the reality is that I am fascinated by the history involved. I just paid $100 for a razor on BST, that was easily the highest price. At some point I expect that I will shell out for a new SR, perhaps Ralph Aust or Koraat or Brian Brown. But not until I have figured out what I really prefer. At this point, as much as I appreciate the beauty of some of the new models, I am far more fascinated by the idea of shaving with a 100 yr old piece of history. But so far I am only willing to cough up the bucks for the beaters

Of course I do agree with the comment “don’t buy what you can’t afford”. When I think about the vacations, restaurant visits etc that I’ve missed in the past year thanks to COVID, what I’ve spent on razors, hones and soap is not so bad.

Contributor
*looks in wallet* … Okay then ... twenty-ONE dollars is too much!

Yeah, this particular rabbit hole seems weirdly deep. The main problem I'm having is I originally thought (just like with DE/SE) "If this works at all I'll figure out which configuration works the best for me and then DONE. Easy peasy." I did not count on the variety as being PART of the enjoyment. I never thought I'd even consider a blinged out blade. So pointless. Now my current favorite has a gold wash and spine work. WTH? Who bought that; how did it get here? I do suspect that in the end I'll settle down to a small handful of favorites, but until I've tried All The Things how will I know?

I'm sure there's a $$ limit, but not sure exactly where it is. If I find out I'll let you know, if they let me post from The Home.

My thoughts on this have changed over time. There were a few NOS vintage blades that stretched me to the limits of what I’d consider rational thinking. Since then I have seen similar blades go for way more. As soon as it goes from a necessity to a hobby, all bets are off.

How much is too much for a painting? A watch? Fishing equipment? The sky is the limit for prices. Different people have different amounts of money to throw around on hobbies. You shouldn’t go broke or risk your financial stability for these things. Set your budgets and have fun with it. You can enjoy a hobby at many different price points.

exactly a lot of the answers I was expecting.......which confirms my thoughts and suspicions of our "group" as a whole.

For many years I've always limited myself to 1 guitar purchase a year. This hobby in comparison is a lot cheaper, and I can see over the course of my life accruing quite a few razors, as long as I can afford it. Perhaps it will initially be heavier on the "beater" razor due to wanting to be proficient on stones at first but we shall see.
You must log in or register to reply here.
Share:
Facebook Twitter Reddit Pinterest Tumblr WhatsApp Email Link
Top Bottom