How is the Timeless razor TI? and should I get one if I have the SS?

Just wondering, how many have both? or tried both? should I get the TI too?
Never had a TI razor before, what do you think?

I had the SS and sold it to get the Ti. Absolutely no regrets. Less weight and seems more comfortable.

Ambassador
As with most modern iterations, my answer to the ‘should I get one’ question is a resounding YES. If you don’t like it, you’ll have little trouble selling it for either what you paid or for a small ‘rental fee‘ loss. If you don’t try it, you always wonder ‘what if?’

I personally don't care for the weight of my Ss timeless, which is totally subjective..So I see a Ti version in my near future.

Yes! I don’t have the SS version, so can’t compare, but I love the weight of the Ti! Great shaves too!

Contributor
Ambassador
Since I got my Ti, I haven't used my Stainless.
D

ead said:
Just wondering, how many have both? or tried both? should I get the TI too?
Never had a TI razor before, what do you think?
Click to expand...

I guess you see which way this is going...

I only have the Ti Timeless, never had or even tried the SS...
But I remember that, when I was reading about it before buying it, lots of people who had been using both were saying that, even though they are equally efficient for a given gap/ plate, they feel different on the face. The Ti feels “softer” on the face, almost less aggressive than the SS.

I really love the Ti Timeless. It’s the only Ti razor I have.
Before buying it, being used to heavier SS or brass razors, I was worried that it might be too light and I won’t get used to it.
That’s certainly not the case for me. It’s about 73g, I believe, which is slightly heavier than most other Ti razors (most are around 50-60g), so it has enough “heft“, whilst still being more manoeuvrable than a SS razor.

I just bought the Ti .95 SB plate to add to my .68 Ti set and am really enjoying how smooth and efficient it is. I have several top end razors including a Paradigm Ti 2. I also have a brass razor and a few stainless steel razors as well.

I like the weight of the Timeless Ti .95. I think it is just about perfect for its intended purpose. That said, I think an adaptation to Timeless stainless would not be difficult at all for me as a roundabout way of answering your question (coming at it from the opposite point of view). I also suspect you would like the so-called "softer feel" that the Titanium system provides.

The Timeless Ti .95 SB fills a need because it fits into a distinct slot for me. It is a great shaver every other day while the .68 is a great every day razor. All I need to do is change the plate and I am good to go for each purpose. I very much like the blade clamping the Timeless system provides. It cuts down on blade chatter and I end up with a lot less irritation.

Had both in.95. Sold the SS kept the TI.
I'm not really a fan of lighweight razors but the TI is amazing. I have the head set on a 4" handle for some added weight.
I

I've tried the Timeless SS and bronze, and currently only have the Timeless Ti in polished. I put an inexpensive titanium tibam handle on it (pics below) - one of my favorite razors! 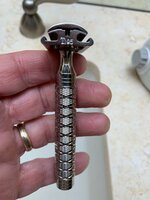 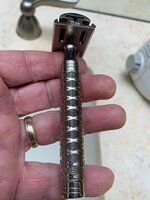 I would not hesitate to upgrade to the ti. It feels better and shaves better than its equivalent ss models.
M

I have owned 4 different versions of the Timeless razors. I've had a matte Ti95SB, matte SS95SB, polished SS95DC, and matte Ti95DC. With that said the Ti95DC is the only razor that has survived in my den and all others have found other homes via the BST as they just couldn't perform up to the standards of the Ti95DC for me.

Some of my findings were that I was able to get a 2 pass 16-20hr BBS with any version, I found no difference between the feel of matte vs polished in the SS versions as I had heard the polished seemed to have better glide, and I liked the weight and the softer face feel of the Ti over the SS. By "softer" face feel I mean the Ti felt smoother than either version of the SS to me. They were all very equal in efficiency so it came down to smoothness to me.

The lone razor in my cabinet...

Ambassador
Is this a question?

Hannah's Dad said:
As with most modern iterations, my answer to the ‘should I get one’ question is a resounding YES. If you don’t like it, you’ll have little trouble selling it for either what you paid or for a small ‘rental fee‘ loss. If you don’t try it, you always wonder ‘what if?’
Click to expand...

Actually, if you buy a Timeless Ti brand new you can expect to take a hundred dollar hit if you decide to sell it later.

bigbrucefan said:
Actually, if you buy a Timeless Ti brand new you can expect to take a hundred dollar hit if you decide to sell it later.
Click to expand...

I bought my stand and .95 Ti SB plate on Scratch and Dent for a reduced price as well. So if the OP goes this discount route over new to begin with, he will not suffer much, if any, loss if he decides to sell.
M

bigbrucefan said:
Actually, if you buy a Timeless Ti brand new you can expect to take a hundred dollar hit if you decide to sell it later.
Click to expand...

This is just not true... As @Southsider pointed out above it is in the $50 range. I've bought and sold a couple of razors and have never taken even a $50 loss. If you look through the BST here and on other site's you'll find that they will sell for the same as S&D prices or in some occasions higher...