How do Gems work?

I'm referring to the mechanics. I have a Micromatic from a lot that I won in order to get the Gillette I wanted--usual story. But it's a beaty and I want to try it. It's a TTO, and I'm interested in the G model and the Junior. I have read that the G Bar is opened by pressing the thumb down against a spring that then snaps the cover shut on the blade--so how is it that all the pictures I see have the razor on it's side with the cover open? Same with the Junior (though I haven't read anything about it being spring operated). Does it's cover just snap shut on the blade and hold it by friction (i.e., no spring)?

Finally, how well can those springs be expected to work if they were used every day for 30 years--assuming I might get a well-used one?

I've learned lots here, and I'm now corking my DEs (which is why I haven't been able to try the Gem yet) as I run through the sample pack.

The spring involved isn't a coil spring, like you might possibly be thinking. It's a flat spring that not only pushes the cap down against the base plate, but also makes contact with the spine of the blade and, to some extent, pushes the blade forward into the clips, or at least keeps the blade from moving back. There isn't enough energy in the spring to overcome the friction when the head is open, so it has no trouble staying open for photographs. (Say Cheese!) The spring moves very little so there really isn't any trouble with it being used every day for 30, heck, even 90 years!
I'll try to get a couple of pics up if you want, for some reason my batteries aren't wanting to be charged today

Thanks, MrGuy, that's what I needed to know. I'd like to see the photos of what you have with identifying info. I'll want to look for at least a 1912, Junior, Featherweight, and G Bar.

My 14 Gillettes cover all the bases I need to with that line, and I intend to shave with them all. Now I'm fascinated by the SEs. They are beautiful, evil-looking tools, aren't they?

Rafferty said:
Thanks, MrGuy, that's what I needed to know. I'd like to see the photos of what you have with identifying info. I'll want to look for at least a 1912, Junior, Featherweight, and G Bar.

My 14 Gillettes cover all the bases I need to with that line, and I intend to shave with them all. Now I'm fascinated by the SEs. They are beautiful, evil-looking tools, aren't they?
Click to expand...

Heck YES!!! And just wait until you get a chance to use one, BBS never felt so good!

Alright, I've tried to take some pics to show the idea of the spring. This is on a pat 1912 model, but the G-bar and Featherweight are very similar.

First, a shot under the base plate, in the closed position. The red arrow coordinates with the second pic. Notice how the spring goes up to the cap. 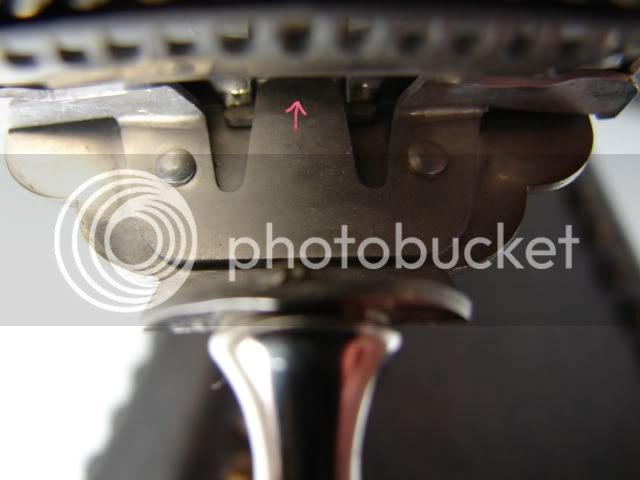 Next, the back side of the head. The arrow is about in the same place as it was on the underside. 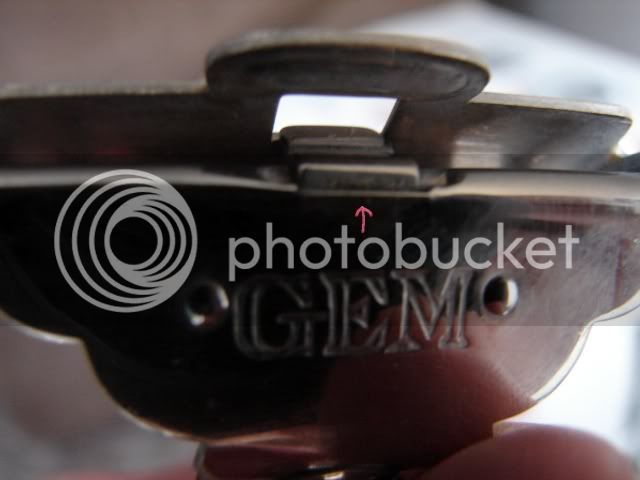 Here is a shot of the inside with the head opened up. The circle shows the spring. 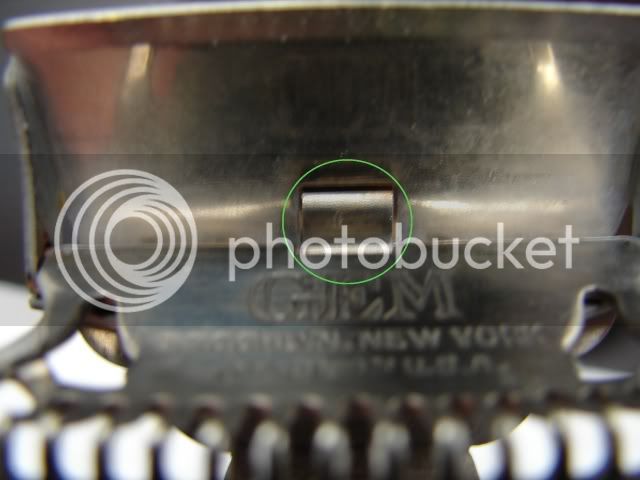 Are we having fun yet?

Alright, now a shot of the head in the open position. The spring is up and the side of the razor shows a slightly flat part holding the head open. 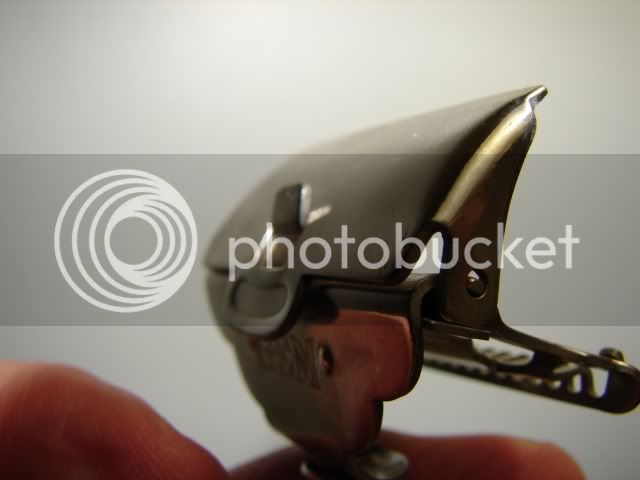 Finally, an attempt to show the blade being held in place. The blue circle shows where the spring makes contact with the spine of the blade. 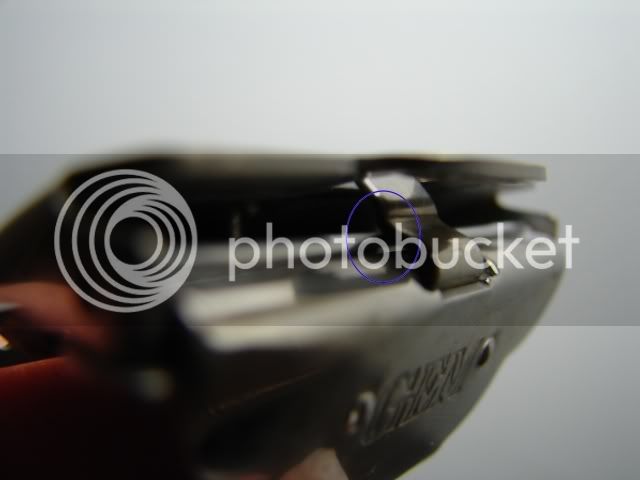 I hope this is what you wanted to know. If not, I'm always up for an excuse to practice some photography skills

How do GEMs work?

I've got heaps of GEMs and Ever-Readys I've been using for a while now. In fact I loaded a Tech with a feather last week, used it once and went straight back to the GEM. It was the battle of the golds as I was tempted to do a show down, the gold tech with my favourite DE blade vs my gold GEM 1912 junior parade

I've been using that junior and the same GEM stainless blade for a while now, in fact I've lost count of how many times I've shaved with it for the past two weeks without changing the blade because I haven't been shaving everyday, it still feels like a GEM does, which is way different to a DE (SE is way scratchier, noisier), but still great, smooth and irritation free results.
K

The 1912 Gem and its ilk are one of the best shaving safety razors I have used and they are extremely durable.

If you like the SE razors, you will probably like the Injectors of which Schick is the best known. The E & G models as are all the Schicks for me are the best at ultra-precision shaving i.e. around the lips, under the nose, if you grow facial hair. They are to me the "sports cars" of safety razors.

As for DEs, I prefer the 3-piece open combs especially the "New". They are all excellent shavers but perhaps due to personal preference I favor the SEs and Injectors.

Thanks for the pics, Randy. In hunting for these, how does the 1912 differ from the Junior? I think the Junior is marked Junior, by I saw an Ebay seller listing a G Bar as a Junior, so I can't necessarily go by what they say.

If you're looking for low admission price, there are three featherweights listed in B/S/T for around $8 shipped. Perhaps not the prettiest designs, but they'd give you something to try. Three GEMS

- Chris
You must log in or register to reply here.

How do I know my 5k work was on-point?