It was a hot day here, for northern England, hitting about 26C, and after returning from a walk in the mountains I took a shower and had a shave, using Speick products, which I generally find good in warm weather. However, I then felt like taking the cooling effect up a notch and so turned to a splash I haven't used for a year or more, a Croatian AS called Ralon which I bought during a holiday in that country. I believe it's made to the same formula as the original Pitralon, but they had to change the name after the fall of Communism. Anyhow, this stuff really does pack a refreshing punch, with a good amount of alcohol and I think also camphor. It's a bit medicinal in scent at first, but the floral notes come through quite quickly and last well, but still with a nice fresh edge. Well worth buying if you get the chance and like a cooling AS on a hot day.

Yes, Ralon is the best Pitralon clone on the market and you can buy it for less than $2 I think. They make a Ralon cream too. 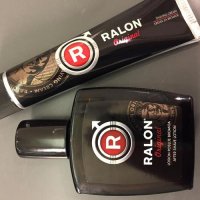 karacha said:
Yes, Ralon is the best Pitralon clone on the market and you can buy it for less than $2 I think. They make a Ralon cream too.

I am a huge Pitralon fan, so this would be great if only I could find a source on this side of the pond!

Contributor
Pitralon is great!
Looks like a copy of Ralon!