Well seeing as I won Tom's scuttle recently, I believe it's probably the done thing to offer something else up. And I, probably, have too many stones. So let's offer a few out, just asking 15 bucks toward shipping...

None of these are the poshest, fanciest stones known to man. But you should be able to take a razor all the way from quite beaten up through to shave-ready using them if you've not got other hones yet. Or if you do - these might be something a bit different, and it's always fun to try new stuff! Winner doesn't have to take all of them if they don't want, can just let me know which they'd like.

Norton Fine India - These work around 600-700 grit, and are excellent knife and tool stones. For razors it'd be for heavier duty repair work. Very hard and barely dish, so good for that. Not sure if I have a picture of this, but if you've got this far on the interent I'm sure you're able to google what they look like.

King Deluxe 1200 - Something of a cult classic, and one of the world's great whetstones. Utterly superb for knives, and I've used for bevel set on a number of SRs to good effect. Probably my most used whetstone, it's got about an inch of life left in it and am letting go because I've bought myself a new one. Second stone from the left here: Willunga Slate - A homegrown Aussie number which I found, flattened, and sealed myself here in sunny SA. This is actually a cracker of a stone, and feels glorious to use. I've made dozens of slate whetstones, and this is one of two I got out of the best quality piece I've found. It's the fourth stone in the picture above.

UK Slate - I don't know what these are for certain, but they're likely to be Welsh hones, probably the grey type of Melynllyn that was marketed by Salmen. You can have any one of the stones in this picture apart from the middle. (The two on the right are proper full-size 8x2 benchstones for reference). To play just say you're in, and post a pic of one or more of your favourite hones. Or if you don't have any - don't (just say you'd like to play). Assuming we get some interest I'll draw a name in about 10 days time. I won't be sending these until early in the NY I'm afraid, but doing this now as I'm in the UK atm, and will need to know to bring some of these back to Aus with me...

Wonderful PIF! Hopefully from this someone finds the passion we all have too from honing!

Moderator Emeritus
Awesome. Respectfully not in, because I have had the chance to try many of these hones, and don’t want to take a ticket off someone else, but they are all good stuff. Do yourself a favour and get in on this.

Contributor
Nice PIF! Respectfully not in as I am in NZ and the postage would be diabolical
2

Contributor
I’m in! Definitely would not want more than 1 or 2 pieces, such as one of the slates. I already have a King 1200 for example. Below are a few of my hones. My favorite hone of all is the black Ark in the front. The hard Ark behind it is also high on my list and the pale green in the back is a Shapton 2k, my go to bevel setter. I’m currently building a knife honing set up and that is a glowing recommendation. Probably need something at the courser end. Very impressive PIF. Not in but you are going to make for some happy lads

I’m currently building a knife honing set up and that is a glowing recommendation. Probably need something at the courser end.

Hello, I am in if it's not too late.
I am interested in the Coticule/BBW slurry stones.
If I were to be the lucky recipient of something, it could be sent to relatives in the UK.
E

Id like to try a llyn Mellynllyn, im even perfectly OK with sending it back or passing it on, I just want to try one! I'm still pins and needles waiting on my charn, in looking at the box now. I've recently revisited a VERY hard purple slate I used to think was a la lune but I doubt it now. It could be Vermont or one of the welsh slates but with a slurry from a diamond plate and dilute through, you can get an amazingly smooth and sharp edge. I'm beginning to open my eyes to slates. I'm with @Legion on everything else though because I have pikes of some of it and wouldn't want to take that opportunity away from some newer honors. I need to do something like this eventually. Good on you friend for passing it on, that's what life is about. (I understand shipping is more for me and would pay it all, as long as you thought it worth for trying the stone otherwise keep it local.) I trust your judgement better than most.
Last edited: Dec 11, 2021

Just got back after a couple of weeks away and seen we've got some interest .

This time on Wednesday I'll draw a winner, as is conventional, and they can have what they want. But it sounds like we might be able to share things among a few people after that as well.

More than happy to pack up and send whatever to as many people as want if they can cover post cost whatever it may be. (If it's just one stone within the UK or Australia it's going to be less than $15 AUS I imagine, to the US it's about $30AUS I think but will double check).

Enjoying the ark love btw... the best finishes I can get are still with my translucents and black.

Ambassador
Very well done! Good luck to you all.

cotedupy said:
Just got back after a couple of weeks away and seen we've got some interest .

This time on Wednesday I'll draw a winner, as is conventional, and they can have what they want. But it sounds like we might be able to share things among a few people after that as well.

More than happy to pack up and send whatever to as many people as want if they can cover post cost whatever it may be. (If it's just one stone within the UK or Australia it's going to be less than $15 AUS I imagine, to the US it's about $30AUS I think but will double check).
Click to expand...

Well in that case in in!
I don't have any stones, just balsa strops at the moment. I do have a 1k Suehiro and lapping film in the post.
I'd love a finishing stone to try out.
(Will pay the diabolical postage of course)

Just noticing this now but seemingly in the nick of time? I'm in, specifically because I'm now very curious about your Willunga slate, you make that sound quite appealing. But wouldn't mind trying UK slate either as the only slate hone I've used is a tiny 5x1 off brand thuri. So far I prefer these though: 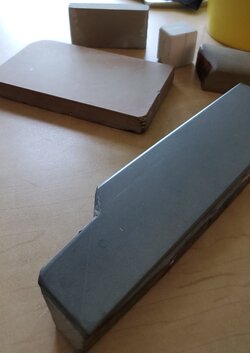 Have just made the draw, and the winner was... making it look like a complete fix after I won his PIF... @Tomo ! 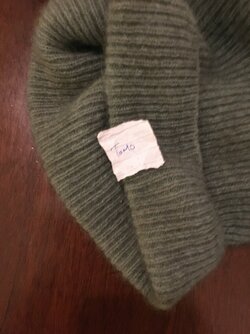 Though I think perhaps Tom was only after the King (?) as he has a load of beautiful finishing stones already. So I drew the other five names after, and will get in touch with people if there's stuff left over.

Moderator Emeritus
Good stuff, gents!
You must log in or register to reply here.