So my wife enjoys making tinctures. Things from around the garden, like Lilac, roses, etc. Soaks the plants in a sealed bottle of vodka for a couple of months.

Two years ago I bought a small Bergamot lime tree. About four feet tall. Living in Canada, we kept it in the pot and brought it indoors for the winter.

The tree finally died, but not before we got a small crop of Bergamot limes. Small limes, not edible, but with very pungent skin. She pulled some and used a zester to shred the skin and put it into a mason jar with vodka.

I thought we'd be using the Bergamot oil to add to tea, to make our own Earl Grey Tea.

But recently I tried making my aftershave. Sandlewood and Bergamot are the two scents I prefer in aftershaves. I used the home made Bergamot and used a store bought bottle of Sandlewood oil.

Poured some cheap vodka in a tiny glass bottle. Added two drops of each oil.

It's pretty good. it works fine as an aftershave splash. All I can smell is the Bergamot though. It's way way more powerful than the Sandlewood. I may try adding some more of her oils, like the Lilac or Lavender, to see if they can poke through the Bergamot.

This is kinda fun. And super cheap. Next time I'm going to try bay leaves soaked in rum instead of vodka, and just try using that as the bay rum aftershave itself.

Although playing with all this alcohol in the bathroom makes it look like there's a drinking problem. A recent episode of Archer had someone talking about, in their desperation in a hotel room, mixing Barbicide with hair mousse to make a cocktail. He called it a Moscow Mousse. Which is pretty witty, I thought. 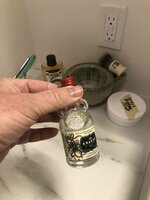 Be careful with citrus oils as they do cause photosensitivity.

Oil derived from citrus peel is skin safe. Neroli is also excellent because it's not made from fruit.

Skip the bay leaves in vodka and just buy some Alcoholado like Superior 70, it's essentially high proof rum with West Indian bay oil added. Culinary bay leaves aren't the same species and the vodka won't produce a clean extraction. Superior 70 won't have much longevity on the skin, but it's good as a muscle rub and you can use it as an aftershave, if that's your thing.
Last edited: Dec 23, 2020

+1 on the Superior 70. I use it straight as a Bay Rum splash. It is so clean and fresh - I judge all Bay Rums I come across to it. At first it only lasted about 30-40 minutes on my skin. But used it the other day after a shave, and shoot 6 hours later my hand still had the odor.
Nice liniment, too. Helps when the knees are aching.

I just made my own aftershave where it's mostly sandalwood, with some frankincense and bergamot. Was going for a sort of "shaman" feel or something like that, turned out pretty good! (And put it in a beard oil too!)

Ambassador
Interesting alternative to the chemistry set I used growing up! Plus, it’s much more useful!