Help to identify a straight razor

I was advised to ask my question on this forum to identify a straight razor.

Some of you might know the 'jail escape/razor' scene from Rambo. In that scene the Police men try to give Rambo a shave and a straight razor is shown/used.

As a collector of movie memorabilia I'd like to identify this type/brand of straight razor so I can search for one. I'll be attending a Comic Con soon where the actor that uses the razor will be signing and I'd like to have this razor signed.

If you want to see the scene here's the link


Attached are some screen shots. Not much to go on I guess. On one screen shot there like a little logo on the handle but it could also be some wear. On another screen shot you can see something engraved on the blade but it's not clear enough to read it.

But perhaps it's enough for you guys to narrow it down. 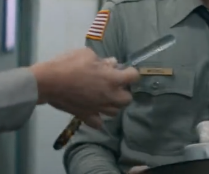 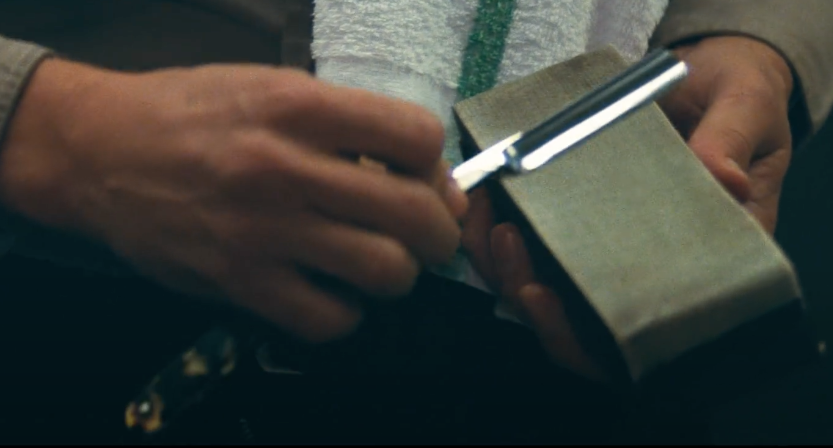 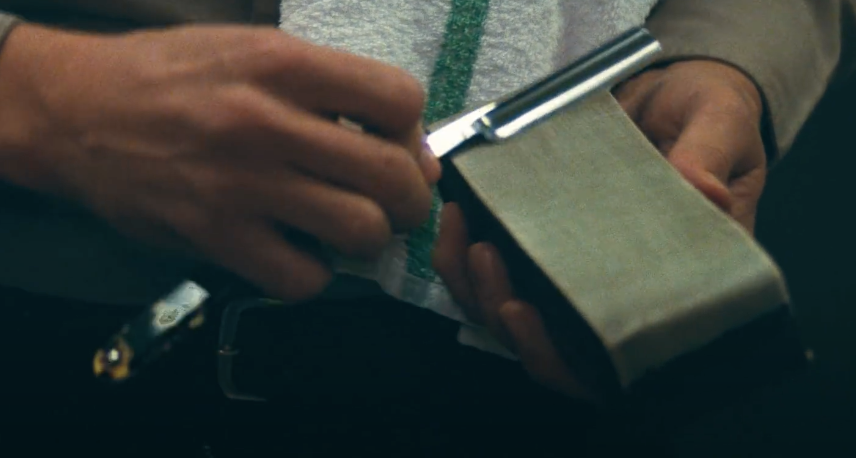 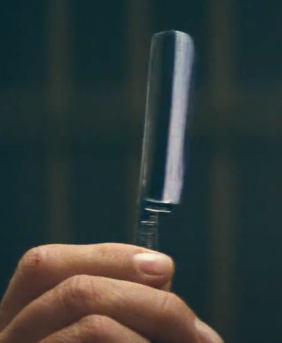 Great escape scene. Best guess; it was a prop since this was an action scene. Likely an RSO with the edge dulled to a butter knife edge.

I don’t doubt that it’s a prop, dull as a butterknife, but it has a well formed stabilizer that is a feature of a real straight razor.

Based on the apparent frown, I’d say that it was a Dovo.

Moderator Emeritus
The frown would have been made by the prop master grinding the sharp edge off.

Pretty hard to say the brand. It’s a pretty standard 5-6/8 round point razor, and literally hundreds of manufacturers made ones like that over the years.

scales look like faux tortoise shell. Dovo do have something along those lines. For me, based on the blade's edge length, that SR looks close to a 4/8. If it was possible to get a better view of the tang/shank markings, a better idea of the manufacture might be attainable.
L

Real razors, but like the gents told you, so many German round point razors start from that same blank. Unless there is a pic of the brand logo, probably no way to ID fully
M

Thanks everyone for the replies and info. It certainly narrows it down a bit.

I understand there are hundreds of manufacturers and only a name or logo could ID it fully.

There's a small logo visible on the handle but it seems faded. Not a very good picture though. They didn't shoot the scene with in mind that somebody, someday would want to trace the razor I would probably bet on it being a Dovo or some other very common brand. I imagine they would look for a razor that was easy to purchase anywhere. It was only a small prop for the movie so they might have even sent someone to a local store.

The tortoise shell scales are what I noticed the most.

DrStrange said:
The tortoise shell scales are what I noticed the most.
Click to expand...

What I noticed most was the extremely concave whetstone.

rbscebu said:
Wh
What I noticed most was the extremely concave whetstone.
Click to expand...

m_steenbrugge said:
Thanks everyone for the replies and info. It certainly narrows it down a bit.

I understand there are hundreds of manufacturers and only a name or logo could ID it fully.

I wonder if that might be the light reflecting off the scales, highlighting the light and dark patterns in the material they are made from.

I think the best screen grab you have is the one with the razor pointing straight up. When I rotate and try to highlight it looks like there is some text, but I cannot even begin to guess what it says. There appears to be some vertical lines decorating the tang in a manner similar to some Thiers Issard razors (see attached). That would be my guess. 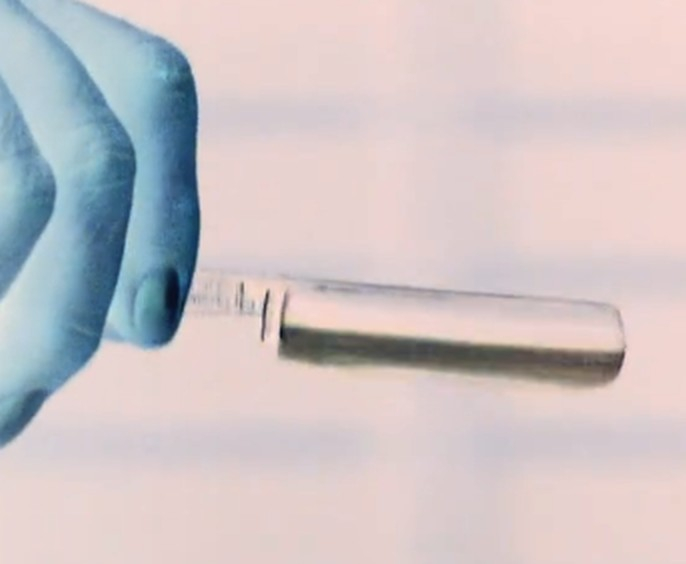 I need to be less antisocial.
2

Returning to straights and honing--help me get my groove back?

B
Help with First Straight Razor